The Tatiana Maslany-led Marvel original series is out this week on Disney+ Hotstar. 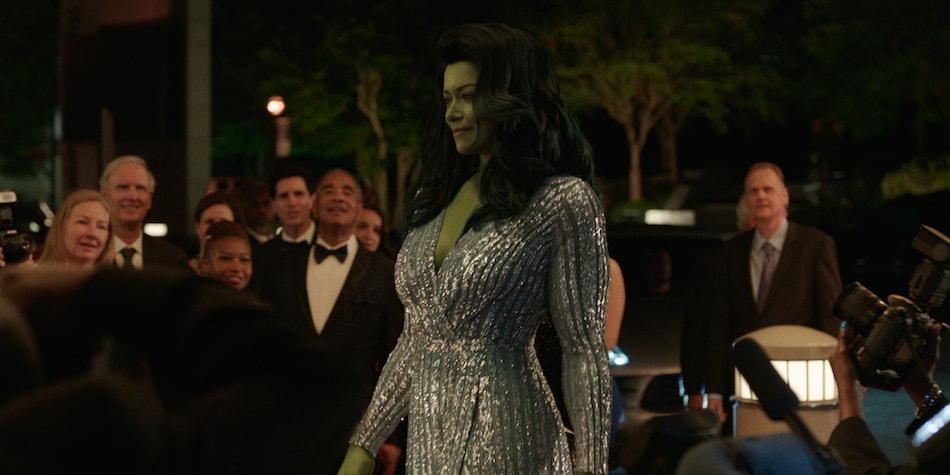 She-Hulk: Attorney at Law — out Thursday on Disney+ Hotstar — would be the first Marvel Cinematic Universe original series to feature a full CGI main character. While some might argue that lead Tatiana Maslany could have just put on some green makeup, it still would not add to the 6-foot 7-inch height requirement and bulky figure the popular comic book character is known for. Directed by Kat Coiro (It's Always Sunny in Philadelphia) and Anu Valia, the upcoming Disney+ series is part of MCU's Phase 4, and formulates an origin story for She-Hulk, with expectations of her appearing in future movies and/or series.

Jessica Gao, who previously shared writing credits on HBO's Silicon Valley and Rick and Morty's infamous "Pickle Rick" episode, serves as the head writer for She-Hulk: Attorney at Law. With the show, Gao is aiming at true half-hour Marvel comedy with little to no serious implications. While everybody loves the big superhero-action spectacle, she notes that TV also happens to be a medium through which audiences can get a peek into a character's everyday life. This rightfully applies to Maslany's Jennifer Walters, who needs to balance her career as an attorney, while being in a green, mutated form that turns several heads around. “I want to know what's happening on a Tuesday when the world isn't in danger. What happens when a 6-foot-7 green woman has to buy a business suit for court?” Gao said in an interview.

A highly-talked about aspect of the upcoming Disney+ show would be the aforementioned CGI, which received a ton of backlash online after the first trailer dropped. Prime critique points were the facial animations, lip sync, and the low-quality render which created an airbrushed effect. At TCA (Television Critics Association), Gao spoke to Deadline about the working conditions at VFX firms that work for Marvel Studios and was satisfied with her crew. “I feel incredibly deferential to how talented these artists are and how quickly they have to work. Obviously, like much quicker than probably should be given to them in terms of churning these things out. I know there are a lot of eyes on the CG and a lot of critiques, but I think we have to be super conscious about how the work conditions aren't always optimal.”

She-Hulk to House of the Dragon, the Biggest Web Series in August

She-Hulk: Attorney at Law releases Thursday, August 18 at 12:30pm IST, exclusively on Disney+ Hotstar in India. The series consists of nine half-hour-long episodes and will be available to stream in English, Hindi, Tamil, Telegu, and Malayalam.

US and audiences elsewhere can stream the Marvel original series on Disney+, starting at 12am PT.

The show was originally supposed to start streaming on August 17, with a weekly Wednesday schedule as in previous MCU small-screen projects. But, Disney+ changed the decision earlier this month and pushed it back by a day, making for a weekly Thursday premiere.

There is no official word from the studio, but the shift was likely made to avoid any overlap with the upcoming Star Wars series Andor, which starts streaming on September 21 — a Wednesday.

By giving each franchise its own slot, Disney hopes to keep viewers engaged for several weeks with two highly-anticipated titles.

Maslany (Orphan Black) plays Jennifer Walters, a talented lawyer and cousin of Bruce Banner aka the Hulk. The She-Hulk trailers don't offer any insight into her transformation into the gamma-irradiated monster, but lore-wise, she was saved by a blood transfusion from Banner after being shot and gravely injured by a mobster.

She-Hulk finds Walters taking baby steps, as she struggles with balancing her personal life and channelling her strength through rigorous training and discipline. She also seems to have some kind of celebrity status, since it's not every day that you get to see a tall, bulky, green-tinted lawyer representing a client. “It's like a person who doesn't want to, like, have to be tugged into this role that the whole world has thrown at them, and just wants to be good at swipe dating,” Maslany said in an interview concerning her character.

Jameela Jamil is billed second on the list as Titania, a social media influencer who is obsessed with She-Hulk, sticking phone cameras onto her face to get a live reaction from her followers. Thanks to a cellular augmentation process, she retains super strength, making her a feasible opponent to Walters. Jamil describes the character as “she almost doesn't need to use her strength; she could just annoy you to death,” as per an interview.

Mark Ruffalo as the Hulk stresses on the importance of wearing spandex when in the monstrous form
Photo Credit: Disney/ Marvel Studios

Mark Ruffalo plays the recognisable Dr. Banner who is “always angry” and ready at will to guide Walters with her training, be it yoga, rage control, or the importance of wearing spandex. Smart Hulk, who made his first appearance in Avengers: Endgame, will return with years of knowledge to impart to her cousin, the newly turned She-Hulk. According to Gao, actors Ruffalo and Maslany “instantly clicked” on set, which further translated into naturalistic cousin chemistry dynamic on-screen. “They grew up together, they went to every family reunion together, and they know how to push each other's buttons,” Gao said in a video interaction.

Tim Roth (Reservoir Dogs) reprises his role as the aforementioned Blonsky, as seen in the Edward Norton-led The Incredible Hulk (2008). He is a former officer of the UK's Royal Marines, who was injected with a variant of the Super Soldier Serum. Following a defeat at the hands of the Hulk at Culver University, he transfuses Banner's gamma-irradiated blood to turn into a monstrous, aquatic creature called Abomination. The She-Hulk trailer indicates he's holed up in a cell somewhere. It is up to Walters to represent him in court. But for what purpose, remains to be seen.

Representing a problematic figure as such is bound to bring media attention, though Walters' best friend thinks it has more to do with the green appearance. Nikki Ramos, played by Ginger Gonzaga, is a paralegal and close companion to She-Hulk. Going by the trailers, she is presented as a supportive and party-loving person, who gets a kick out of watching Walters turn into She-Hulk. “I want people to be able to relate to She-Hulk, someone who has been forced to come into power and live in a body that's different,” Gonzaga shared in an interview. “I hope that [the audience] gain that type of confidence.”

Wong, who recently ascended in ranks to become The Sorcerer Supreme, has made scattered appearances throughout the MCU franchise. Played by the appropriately named Benedict Wong, the sorcerer serves as a harbinger of bad news in She-Hulk: Attorney at Law, warning the “universe is on the edge of a precipice.” His involvement here isn't all that surprising though, as he was previously seen in a caged ring battle against the Abomination in Shang-Chi and The Legend of The Ten Rings. Perhaps Blonsky has something devious planned, as we see Wong trying to talk Walters out of bringing him into the public eye.

Adding to the numerous lawyers to be expected in She-Hulk, let's add a blind one to the mix. In a surprise tease at San Diego Comic-Con 2022, the nocturnal vigilante from Hell's Kitchen is also revealed to be involved in the Marvel original series. Charlie Cox is set to reprise his role as lawyer Matt Murdock aka Daredevil, though details on his role are sparse. As per an MTV interview, Maslany describes the two as “Besties!”

Following the cancellation at Netflix years ago, Daredevil is getting his own show at Disney+ as well, with Daredevil: Born Again expected to premiere in early 2024.

Then there's Mallory Book, played by Renée Elise Goldsberry (Tick, Tick... Boom!), serving as the opposing prosecutor to Walters. As a touch defendant in court, she has earned the nickname “The Face Who's Never Lost a Case,” though it's not enough to intimidate Walters.

Here's the official synopsis for She-Hulk: Attorney at Law from Disney+ Hotstar:

In Marvel Studios' She-Hulk: Attorney at Law, Jennifer Walters (Tatiana Maslany) — an attorney specialising in superhuman-oriented legal cases — must navigate the complicated life of a single, 30-something who also happens to be a green 6-foot-7-inch superpowered hulk. The nine-episode comedy series welcomes a host of MCU vets, including Mark Ruffalo as Bruce Banner/Hulk, Tim Roth as Emil Blonsky/Abomination, and Benedict Wong as Wong, as well as Jameela Jamil, Josh Segarra, Ginger Gonzaga, Jon Bass and Renée Elise Goldsberry.

Marvel dropped the first trailer for She-Hulk: Attorney at Law on May 18, opening to mixed reception, owing to the abysmal CGI and animations. An interesting thing to note here was the change in She-Hulk's origin story. While the comics make her a victim of a shooting, here it seems like she gets into a car accident, before gaining powers. The She-Hulk trailer also stresses how much Walters despises the idea of being a superhero, which is something her cousin Banner is against, as seen in the Comic-Con trailer.

Released on July 24, the Comic-Con She-Hulk trailer is a quirkier, family dynamic-driven type. Banner acts as a life coach to Walters, constantly pushing her limits and buttons, as he tries to cope with the idea of her not wanting to be a superhero. The second trailer also hinted at some fourth wall-breaking scenarios, and offered the first look at the new Daredevil suit.

As part of the promotion, Marvel also released some overly-edited random clips from the upcoming series, titled "Date" and "Super Hero."

At the time of publishing, there's no word on when the first reviews are expected. Going by earlier Disney+ Marvel shows, reviews usually drop a day ahead of release.

Here's the official poster for She-Hulk: Attorney at Law from Disney+ Hotstar: