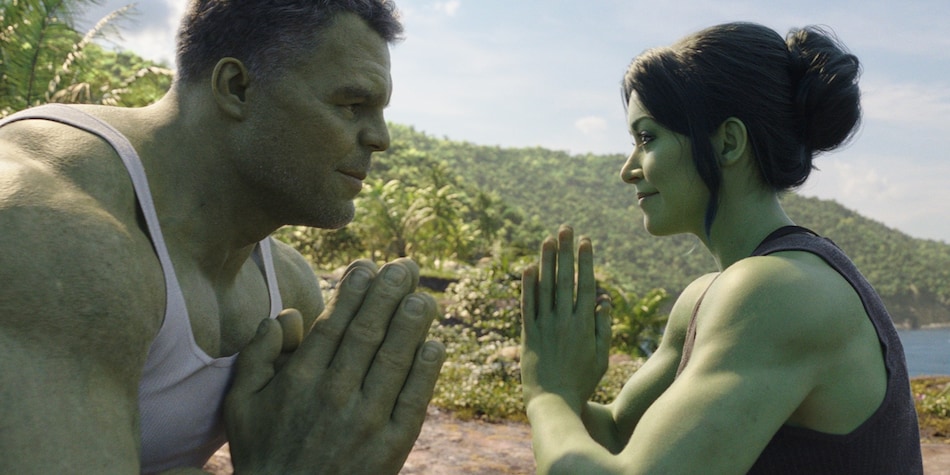 She-Hulk: Attorney at Law — premiering Thursday on Disney+ and Disney+ Hotstar — is the first out-and-out comedy that Marvel Studios has produced. While the Elizabeth Olsen-led WandaVision was ultimately a tragedy cloaked in comedy, She-Hulk isn't hiding anything under the impenetrable green skin of its superpowered lawyer Jennifer Walters. Speaking of, this is the second Marvel series centred on an attorney after Daredevil. (And after a cameo in Spider-Man: No Way Home, Charlie Cox returns as Matt Murdock/ Daredevil on She-Hulk, as the trailers have revealed.) That said, She-Hulk: Attorney at Law has more in common with Deadpool — and WandaVision's Modern Family-esque mockumentary-style episode — than Daredevil. Yes, I'm talking fourth wall breaks.

There's a scene during the credits in every She-Hulk episode — and it feels like the Marvel series is trying too hard. Because after a point, the mid-credits scenes come across as discarded in-episode gags, which creator and head writer Jessica Gao (Rick and Morty) decided to stick at the end of the episode after they were cut from in between the episode.

Much of the humour on She-Hulk: Attorney at Law takes the form of Walters speaking to the audience, as she comments on what others have said or what's happening around her. At times, Walters talks to us as if she's like one of us — a She-Hulk viewer herself. Walters is hyper-aware that she's inside the telly, and who's who in the Marvel Cinematic Universe. At times, she notes how story narrative works, hints at an upcoming post-credits scene, and even delves into how TV shows are perceived on Twitter. But just because she's aware of how filmmaking and “film criticism” works, doesn't always help She-Hulk as a show. It's a blatant attempt to have your cake and eat it too, and unfortunately, the ingredients of the newest MCU series can be pretty mundane at times.

For one, there's the all-too unmistakable feeling of too much of it being fake. She-Hulk: Attorney at Law is the first Marvel series with a title character who's all CGI. The 6-foot 7-inch She-Hulk isn't Tatiana Maslany in mo-cap — rather, “she” is entirely made out of computer-generated graphics, based on a 6-foot 7-inch stand-in who was used as a reference on set. And while the MCU fandom was up in arms over the quality of CGI in the first She-Hulk trailer — a discussion that has since rightly snowballed into a larger conversation about Marvel's mistreatment of VFX studios — I didn't have any complaints with how She-Hulk looks in the show. It's just that there's no tangible feeling to any of it. She-Hulk feels like it was shot entirely on a Disney parking lot.

Everything You Need to Know About She-Hulk: Attorney at Law

The additional weird bit is that we have never spent this much time with a Hulk — especially not indoors, and outside of fight scenes. Ever since 2008's The Incredible Hulk, Bruce Banner/ Hulk has been restricted to ensemble tales, which means we see him for a few minutes here and there. Hulk's largest recent appearance in the MCU was 2017's Thor: Ragnarok, but that took place in a more fantasy world. By contrast, She-Hulk roams around in places and environments that we know. It doesn't help that the cinematography and production design are utterly bland. Be it a prison, law offices, or the courtroom, everything on She-Hulk: Attorney at Law feels too sanitised and lacking flavour. This goes back to the too-much-CGI issue in a way.

Part of this is self-imposed — She-Hulk: Attorney at Law doesn't have huge stakes, and it's more about the quiet times, like a regular Tuesday where Walters is dealing with legal cases and her dating life. After an accident on a road trip causes her cousin Banner's (Mark Ruffalo) blood to mix with hers, Walters (Maslany) gains all the powers of being a Hulk but without some of the downsides. Unlike He-Hulk, Walters doesn't have to battle another personality when she becomes a giant green monster. In fact, she's not a monster at all. She's still herself. And as a result, not only does she not go on crazy rampages, Walters also displays a better and quicker grasp of the Hulk stuff than Banner, who is surprised given it took him a decade-and-a-half to reach his zen state of Smart Hulk.

Still, Bruce is adamant that Jennifer undergoes training, partly because he assumes that she's going to take on the added responsibility of being a superhero now. “The idea of being a superhero is not appealing to me,” Walters says in protest. All Walters wants is to get back to her job. But that's easier said than done. More so when her new boss demands that she show up to the office everyday as She-Hulk if she wants to keep the job. What She-Hulk: Attorney at Law gets at, thanks to its character's willingness to participate in the real world as opposed to others who hide their identity or exclude themselves from it, is that people are always ready to use you to their benefit. Walters is “asked” to change form repeatedly, as if she's a toy whose buttons can be pressed.

In that sense, She-Hulk: Attorney at Law hits at the world that women have to put up with. Even if they are “superheroes”. The new Marvel series dissects misogyny and toxic masculinity through some of its male characters. There's the colleague and fellow lawyer Dennis Bukowski (Drew Matthews) who is entitled enough to think every woman wants him. And then there are the other men Walters sees as she goes on dates. Not getting any matches as Walters — dating in yours 30s is difficult, the protagonist notes — she relents and signs up as She-Hulk on an online dating app. Naturally, she's inundated with responses. But most of her matches aren't really interested in her as a person. Unfortunately, She-Hulk fails to really dig its claws into said material.

But nowhere does the new Marvel series feel as unsuccessful as with its attempts to call out itself. I'm talking about the character's name. She-Hulk: Attorney at Law does its best to comment on how the name “She-Hulk” is both sexist and derivative. Across the first four episodes — this is what all critics had access to — Walters keeps noting that she's thinking of a name. But the arguments are put to bed by the fact that She-Hulk is in the show's title. Marvel Studios has seemingly already had the final say. No matter what the show does or says, it cannot get away from that. The writers can joke about it and poke fun at it, but they ultimately have no power to change it and have to come to peace with what they have inherited.

To me, this feels like a misstep. She-Hulk was created in 1980 — over 40 years ago, and admittedly, a very different time. We ought to be beyond the era of assigning gender prefixes (or suffixes) by now. I understand if the original moniker had one to begin with. Say, going from Superman to Supergirl, or Batman to Batgirl. But it makes no sense to engage in this practice when the identities are gender-neutral. In Moon Knight, when Layla El-Faouly (May Calamawy) became the Scarlet Scarab — an identity taken upon only by two men in the Marvel comics until then — she wasn't called She-Scarab or something. She was simply Scarlet Scarab. At the end of Hawkeye, though Kate Bishop (Hailee Steinfeld) floats Lady Hawk and Hawk Eve as potential names, it's clear that she's the new Hawkeye.

Alongside the futile attempts to mock “She-Hulk”, the new Marvel series also tries to convince us — and itself, really to be honest — that it's a good name. Walters' paralegal best friend and her vociferous supporter, Nikki Ramos (Ginger Gonzaga), is given dialogues along those lines. We are given the most absurd reasons, like it grows on you, or it makes for a cool rhyme. Through Banner, She-Hulk: Attorney at Law even attempts to pre-empt the discussion. In the first episode, he notes repeatedly that he didn't come up with “Smart Hulk”, but once they call you that, the name sticks. She-Hulk's name comes from a male reporter, and it too sticks. Except Smart Hulk just isn't as problematic as She-Hulk — it's mildly funny if anything, as only a fool would dare to call themselves smart — it's not even in the same ballpark.

In effect, while Walters is running from her identity, the TV show isn't allowed to. And given that She-Hulk: Attorney at Law ultimately takes place in the MCU, I suspect Walters won't be allowed to for too long either. As someone once said, with great power comes great responsibility. (Add to that the fact that Ruffalo has openly spoken about She-Hulk being crucial to the next Avengers movie. And I'm guessing it's not because of her legal talents.) For this nine-episode run though, the new Marvel series is happy to play into that will-she-or-won't-she.

Wong (Benedict Wong), who returns after Doctor Strange in the Multiverse of Madness, is very funny in his brief presence on She-Hulk: Attorney at Law. Though the Sorcerer Supreme is largely deadpan in his ways, his friendship with a California woman called Madisynn (Patty Guggenheim) is at the heart of the laughs.

Outside of the MCU cameos, She-Hulk has room for celebrities too. And while some jokes are pretty good, others feel undercooked.

What you get alongside is a legal episodic comedy — She-Hulk: Attorney at Law is not a case of the week show per se, but it certainly hews to that structure. As cases are solved, characters rotate in and out of the series — that weaves together disparate parts of the MCU. It goes back to one of the very first Marvel movies, as Tim Roth returns as Emil Blonsky/ Abomination. It also ties into one of the most recent ones, with Wong (Benedict Wong) showing up in a couple of episodes. I've already mentioned Daredevil — and of course, there's Hulk himself. On top of that, She-Hulk has a villain of its own in superpowered social media influencer Titania (Jameela Jamil), though despite being second billed, she's more or less missing for nearly half the show's run.

By crowding the show with characters from every era — or “phase”, for you Marvel nerds — of the MCU, She-Hulk: Attorney at Law aims to offer something for everyone. It's aware of this, and tries to get ahead of the cameo-every-week criticism by turning it into a fourth wall-breaking gag. It might elicit a chuckle in the moment, but in the larger scheme of things, the approach is detrimental to She-Hulk. I just wish the new Marvel series didn't try so hard to be likeable.

From She-Hulk to House of the Dragon, the Biggest Web Series in August

She-Hulk: Attorney at Law premieres Thursday, August 18 on Disney+ and Disney+ Hotstar. A new episode will air every Thursday around 12:30pm IST/ 12am PT until October 13. In India, She-Hulk is available in English, Hindi, Tamil, Telegu, and Malayalam.