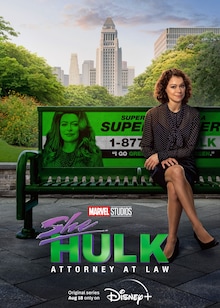 Share
Comedy Drama Superhero
3.1 ★ 2022 Season 1 English 13+
A lawyer who specialises in superhuman-oriented legal cases becomes a superhero herself, thanks to a blood transfusion from her cousin Bruce Banner.

Jennifer Walters (Tatiana Maslany) — an attorney specialising in superhuman-oriented legal cases — must navigate the complicated life of a single, 30-something who also happens to be a green 6-foot-7-inch superpowered hulk.

She-Hulk: Attorney at Law — premiering Thursday on Disney+ and Disney+ Hotstar — is the first out-and-out comedy that Marvel Studios has produced. While the Elizabeth Olsen-led WandaVision was ultimately a tragedy cloaked in comedy, She-Hulk isn't hiding anything under the impenetrable green skin of its superpowered lawyer Jennifer Walters. Speaking of, this is the second Marvel series centred on an attorney after Daredevil. (And after a cameo in Spider-Man: No Way Home, Charlie Cox returns as Matt Murdock/ Daredevil on She-Hulk, as the trailers have revealed.) That said, She-Hulk: Attorney at Law has more in common with Deadpool — and WandaVision's Modern Family-esque mockumentary-style episode — than Daredevil. Yes, I'm talking fourth wall breaks.