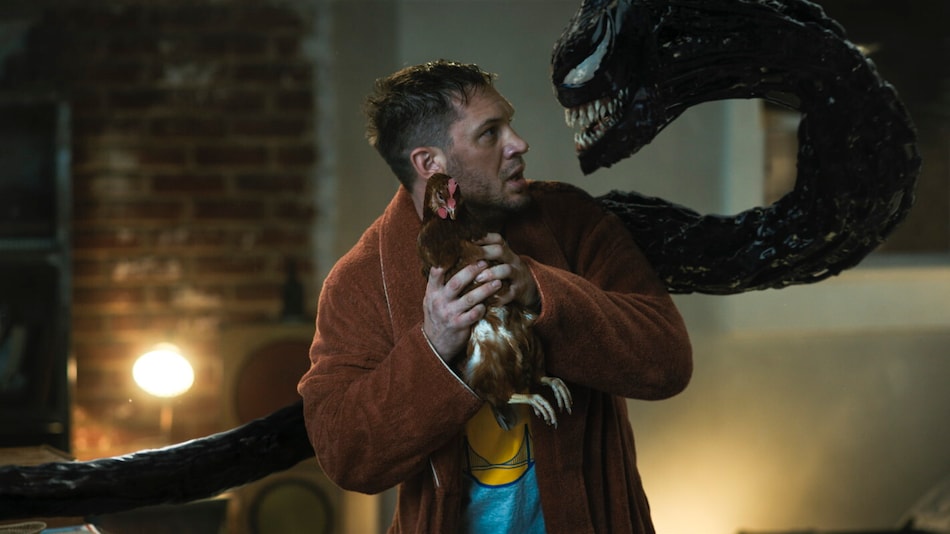 Venom: Let There Be Carnage — the second installation in the Venom series — is all set to hit Indian screens on October 14. In the sequel, Tom Hardy returns as investigative journalist Eddie Brock who is the host to the alien symbiote Venom. Brock will face Woody Harrelson's serial killer Cletus Kasady who gets his own alien symbiote and turns into Carnage, as shown in the final Venom: Let There Be Carnage trailer. The movie had its US release on October 1, but the Indian release date is on October 14.

Tom Hardy, who also worked on the story and is among the producers of the movie has revealed plans for a sequel to the upcoming movie. Sony Pictures hasn't officially announced Venom 3 yet.

From Dune to Venom: Let There Be Carnage, What to Watch in October

Venom: Let There Be Carnage leaked on torrent sites and piracy websites following its US release, but now that it is available in more countries, ideally, more fans will experience it in the theatre.

With that, here's everything you need to know about Venom: Let There Be Carnage, be it when you can watch it in cinemas, who stars in it, critics' reviews, and how much it has earned.

Venom: Let There Be Carnage will release on Thursday, October 14 in Indian theatres. It was slated for Friday, October 15 before being tweaked by a day. Venom fans in Maharashtra will have to wait for one more week to catch up with the movie after its India release as the Maharashtra release of Venom: Let There Be Carnage is slated for October 22.

The Venom sequel's release date was brought forward to October 1 in the US following Shang-Chi's early box office performance. But Sony Pictures opted to not do so in India, as not to collide with the release of No Time To Die, which hit the screens on September 30.

Venom: Let There Be Carnage stars Tom Hardy as investigative journalist Eddie Brock whose symbiotic bond with an alien named Venom gives him superpowers. This time around, Brock must stop serial killer Cletus Kasady, played by Woody Harrelson, who has broken out of prison after merging with another alien symbiote. Cletus Kasady was first introduced in a post-credits scene attached to Venom.

Talking about his role as Kasady, Harrelson said, “He's a psychotic killer.He had a nasty upbringing, and now feels compelled to take revenge on the people he felt were responsible for the state he was in.”

New cast members — apart from Harrelson, who technically had a cameo in the first Venom movie — include Naomie Harris as Cletus' love interest Frances Barrison (Shriek in the comics), and Stephen Graham as Detective Mulligan who's trying to solve the Kasady killings.

Talking about the character of Frances Barrison, Marcel said, “Naomie's character, Shriek, has her own superpower. She is as psychotic as Cletus and quite the powerhouse.”

Serkis has previously directed the 2018 Netflix-Warner Bros. film Mowgli: Legend of the Jungle (2018), and helmed the second unit for Peter Jackson's The Hobbit film trilogy. He is best known for his performance capture roles, including Caesar in Planet of the Apes reboot trilogy, Gollum in The Lord of the Rings film trilogy, Snoke in the Star Wars sequel trilogy, and King Kong in the 2005 eponymous film.

Venom 2 is the first comic book directorial venture for Serkis, who has starred twice as a minor villain Ulysses Klaue in Marvel Cinematic Universe films Avengers: Age of Ultron (2015) and Black Panther (2018).

On Venom: Let There Be Carnage, Serkis worked off a screenplay penned by Venom co-writer Kelly Marcel. Hardy developed the story with Marcel.

Talking about working on the script, Marcel said, “Let There Be Carnage was a really fun and exciting time where anything felt possible for these characters that we have grown so fond of. Tom worked tirelessly to bring this story to life both in development and on set. We all know how talented he is on screen, but I'm very excited for people to get to see how brilliant he is offscreen as well.”

Oscar-winner Robert Richardson (Hugo, The Aviator) is the cinematographer.

Stunt coordinator Jim Churchman and fight coordinator George Kirby were charged with choreographing the film's fight scenes. “The tone of the fight was that it was supposed to be comedic but painful,” said Kirby. “The reference we kept coming back to was Buster Keaton – old-school, black-and-white stunts."

Production designer Oliver Scholl and costume designer Joanna Eatwell were responsible for creating a stylish but grounded look for the wild antics of Venom and Carnage. Eatwell said that her costuming choices were respectful of the actors' commitments. “Woody is a longtime vegan, so whenever we could use non-animal products, we did.”

Sony Pictures unveiled the first two-and-a-half minute trailer for the Venom: Let There Be Carnage — in English and Hindi — this May.

The second official trailer of Venom: Let There Be Carnage came out this August.

The reviews of Venom: Let There Be Carnage started coming in following the October 1 release. After 181 critical reviews on Rotten Tomatoes, the movie has earned a score of 59 percent, which amounts to just average. On Metacritic, the movie has a score of 48 that represents “mixed or average reviews,” based on 39 critic reviews.

Will there be a Venom 3?

Venom: Let There Be Carnage star Tom Hardy has already begun planning Venom 3. “I'm thinking about the third movie as well, because I think you need to write that at the same time,” Hardy told Esquire in an interview this August. “A third Venom movie won't be greenlit until the second is successful, but the studio [was] really, really pleased with number two.”

While Venom failed with critics, it racked up over $856 million (about Rs. 6,359 crores) at the box office worldwide, giving Sony Pictures the confidence to make another. While Sony Pictures is yet to officially announce Venom 3, the studio is usually quick to move on its superhero movies. Venom: Let There Be Carnage was originally set to release just two years on from Venom, until the ongoing coronavirus pandemic delayed the schedule.

Spoilers ahead for Venom: Let There Be Carnage post-credits scene.

Following the Venom sequel's US release, Screen Rant reported that Venom: Let There Be Carnage sets up a future meeting between Tom Hardy's Lethal Protector and Tom Holland's Spider-Man.

Here's the official poster for Venom: Let There Be Carnage from Sony Pictures:

Apple 'Unleashed' October Event Announced, New MacBook Pros and AirPods Expected
iPhone 13 Production Likely to Be Cut by as Many as 10 Million Units Due to Chip Crunch: Report