Plus, the first Thor: Love and Thunder poster is here. 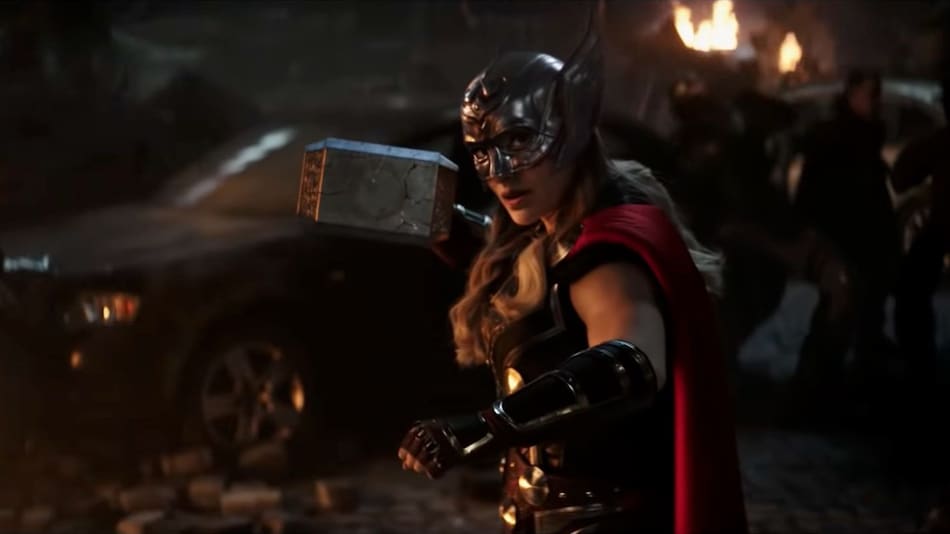 Natalie Portman as Mighty Thor in Thor: Love and Thunder

Thor: Love and Thunder's first trailer — out in English, Hindi, Tamil, Telugu, Malayalam, and Kannada — teases exactly what we've already known about the movie and nothing more. Chris Hemsworth's Thor briefly teams up with Guardians of the Galaxy. Natalie Portman's Jane Foster will wield the Mjolnir and become the Mighty Thor. Russell Crowe has a cameo as Zeus, king of the Olympians. And director Taika Waititi will once again make use of nostalgic rock hits to drive his movie, with Guns N' Roses' forever hit “Sweet Child o' Mine” being used in the first Thor: Love and Thunder trailer. It looks like Waititi has been unleashed, like he was on Thor: Ragnarok.

Alongside, the first Thor: Love and Thunder poster has been unveiled. (You can see it at the end of the story.) With two Marvel Cinematic Universe movies in a gap of two months, Marvel has had to begin marketing for the second one while the first one — Doctor Strange in the Multiverse of Madness — is still a couple of weeks away from release.

“These hands were once used for battle, now they're but humble tools for peace,” Thor (Hemsworth) says at the start of the Thor: Love and Thunder teaser trailer, as we see Thor transforming from a child into an adult as he sprints. In present day, Thor buries his Strombreaker axe, signalling he's retiring. As we see him meditate, he adds: “I need to figure out who exactly I am.” As the Guns N' Roses track comes into play, the Thor: Love and Thunder trailer moves into a higher gear. We see the Big Lebowski Thor — from Avengers: Endgame — training to seemingly lose that belly, before saying he “wants to choose his own path” that's intercut with Star-Lord (Chris Pratt) rolling his eyes.

What follows is a montage of sorts set to “Sweet Child o' Mine”, with Thor and his friend Korg (Waititi) being left behind by the Guardians of the Galaxy, a bunch of superpowered magical goats pull a floating ship — this is actually from the Marvel Comics, believe it or not — Thor passionately kisses a blue-haired woman, and there's a brief look at Zeus's (Crowe) back as he catches a yellow (figurative) lightning bolt out of thin air. I would imagine he's one of the gods that is killed by the Thor: Love and Thunder villain Gorr the God Butcher (Christian Bale), who's not in this first trailer.

Star-Lord's voice cuts into the Thor: Love and Thunder trailer as he says: “Remember what I told you. You ever feel lost?” We're shown King Valkyrie (Tessa Thompson) who seems to be bored out of her mind ruling New Asgard. “Just look into the eyes of the people that you love,” Star-Lord then continues, as we jump into the scene where this is actually happening. Thor tries to lock eyes with Star-Lord, who avoids him before saying: “Not me.” It's naturally supposed to be a comedic moment, as Thor attempts to deflect off the remark: “What? Just listening.”

Following the Thor: Love and Thunder title card animation, we see a reforged Mjolnir fly into the eyes of a woman. Thor looks stunned — and the Thor: Love and Thunder trailer is trying to keep some sort of mystery for those who haven't followed the news at all — but we all know who it is under there. I've already mentioned it too. Thor's astrophysicist ex-girlfriend Jane Foster (Portman) becomes the Mighty Thor while undergoing cancer treatment. The comics have well explained how she comes into her powers, and what happens from there, but Marvel has rarely adapted the illustrated pages straight onto screen. There's going to be tweaks to her story — we just have to wait to find out what they are.