It's a bit like The Office meets Hitchhiker’s Guide to the Galaxy. 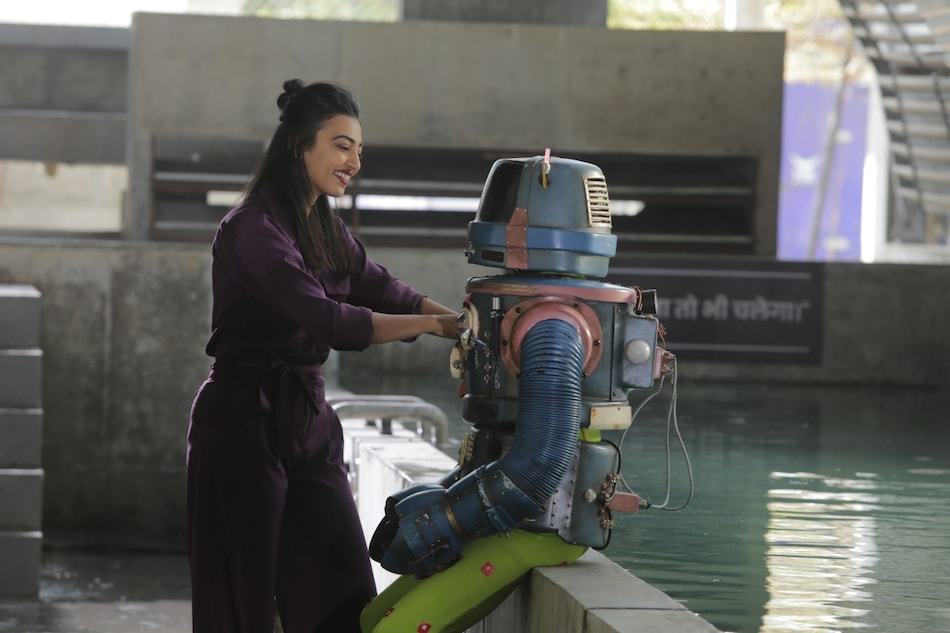 OK Computer — the new Hotstar Specials series — wants to be a lot of things. At its core, it's designed as a sci-fi comedy. While it's tonally inspired by Douglas Adams' seminal 1979 novel The Hitchhiker's Guide to the Galaxy, its filmmaking style takes after modern-day mockumentaries such as The Office and Modern Family. But then, OK Computer is wrapped in a whodunit mystery thriller plot, which seemingly draws from the works of Isaac Asimov and HBO's Westworld series. Ship of Theseus director Anand Gandhi, a writer on OK Computer, has acknowledged the Adams and Asimov inspirations. He said that they — along with creators, directors, and fellow writers Pooja Shetty and Neil Pagedar — would constantly ask: “What would Charlie Chaplin, Jacques Tati, or Govinda do? That's the mindset of the series […] wacky and zany.”

Unfortunately, OK Computer fails to emulate the best qualities of those inspirations. In the name of being comedic, the OK Computer writers force quirkiness and idiosyncrasy everywhere. Every character is eccentric, has odd mannerisms, and says the most random of things. OK Computer is bonkers and all over the place at times. As for the narrative, exposition is stuffed in every corner. It does try to be creative at times, by making use of animated interludes or being self-aware about its monologues. But those are rare respites. To add to the expository mess, the OK Computer script is riddled with logical gaps and other issues. There's little character development as the six episodes — I've seen them all — are overtly plot-driven, but even that is messy. It makes no sense how things happen, and why they go in a certain direction.

OK Computer also occasionally got on my nerves. This is a dialogue-heavy show, to the point it feels like OK Computer is competing with the Tina Fey comedy 30 Rock. That is not a problem in itself. The trouble is that one of the primary characters is a sentient AI robot called Ajeeb (voiced by Pagedar, and played by Ullas Mohan), whose voice is especially grating on the ears. I frequently wanted to punch Ajeeb through the screen so it would stop talking. At one point, OK Computer inserted a high-pitched tone because it was something the characters had to endure as well. I muted the show. Who thought this was a good idea? These choices are deliberate no doubt, but you're not going to score more viewers if they can't stand to even listen to your show.

Set in near future 2031, OK Computer opens in Goa and dives into its plot straightaway: a self-driving car has killed a pedestrian. The man's face has been mangled so badly that it's unidentifiable — OK Computer turns that into a joke, with every character referring to the victim throughout as “Pav Bhaji” — and there's no match for his DNA too in any database. Enter Goa's cyber cell ACP Saajan Kundu (Vijay Varma), a self-described lone wolf heavily dependent on others, who deems it a murder. But Laxmi Suri (Radhika Apte), the CEO-founder of a non-profit that advocates for ethical treatment of robots, objects — pointing out that an AI could never kill a human as it goes against Asimov's three laws of robotics. There is history between Saajan and Laxmi, who seem to have split because of their differing values on the involvement of robots in human society.

Saajan's investigation soon leads him to Ajeeb, a one-of-a-kind robot that kickstarted India's AI revolution. If you let OK Computer tell it (which it does via a half-episode of exposition), Ajeeb was received so well when it was created years ago that it was dubbed a messiah. It essentially solved all of India's problems, including religious harmony — or rather, the lack of it. This is possibly the greatest (accidental) joke OK Computer is capable of. More so given how Ajeeb is presented as naïve and terrified. But Ajeeb soon went in a new direction that came as a betrayal to most Indians, who pulled him down from his pedestal and all but discarded him. Forgotten and unwanted, Ajeeb has been missing for a while before Saajan's team runs into him during their investigation. Saajan is convinced that Ajeeb is guilty party, but he'll have to go through Laxmi.

Because that's not enough plot and with one eye on a season 2 (that has yet to be greenlit), OK Computer further expands by bringing in Pushpak Shakur (Jackie Shroff), the leader of an “anti-tech, anti-science, anti-vax, and anti-gravity ecoterrorist” group called JJM, Jigyasu Jagrati Manch. (Sidenote, but isn't anti-vax and anti-gravity, whatever that even means, essentially anti-science? Pushpak also doesn't believe in clothing, which results in Disney+ Hotstar having to censor its own original. That's one facet of Indian theatres I've definitely not missed in this never-ending pandemic.) Pushpak confesses that he's behind the death, though it's immediately clear that he might have ulterior motives. Shakur serves as a mouthpiece for the OK Computer writers' values and viewpoints, like the show needed another expository device.

When it's not consumed by narrative demands, OK Computer attempts to ruminate on the impact of AI robots on human society (like I, Robot from Asimov) and that we've gone overboard with technology (like Hitchhiker's). The world of OK Computer is filled with robots capable of complex language processing and understanding but they seem to share limited rights. And like the Radiohead album it's named after (which in itself was a line from Hitchhiker's), OK Computer tries to be political. But it barely registers, ending up as jabs rather than deep-cut observations.

Weirdly enough, OK Computer ends up saying the most through its image of India. In this near future, India is the leader of the world from science (India saved the planet from warming, Laxmi is the Greta Thunberg) to football (India now beats European giants handily). It's part wishful thinking and part pop nationalism. That doesn't reflect today's India at all, which makes OK Computer look like an alt-history sci-fi series. But OK Computer is still very much an extension of today's India elsewhere. It's almost as if OK Computer is saying that we're bound to end up who we are as a people, no matter the technological progress, a shift in grassroots priorities, or celebrity teenage activists (if we don't jail them first).

Gandhi also used the “India” reason to justify OK Computer's lo-fi aesthetic — it's reminiscent of Hitchhiker's again, so that works — though in my opinion, it's more likely a consequence of what the budget allowed. There's more proof of that in a portion of OK Computer that is set inside a VR video game (it's publicly accessible but described as a dark net video game as if that means anything), given how cartoonish the graphics are. And oh, the VR headsets look exactly like the Oculus ones, funny given it's 2031 and India is the projected leader in every department.

The Hitchhiker's Guide to the Galaxy is one of the funniest books I've ever read. And because and despite it being over 40 years old, we have and have not come a long way. Adams envisioned a world overrun by technology that was more annoying than helpful. It's why the answer to life, the universe, and everything, the book's supercomputer Deep Thought deduces, is 42. But as our world has become overrun by technology, we've witnessed a whole range of unexpected consequences. OK Computer is born out of that worldview, that technology has done more bad than good. Today's broken “digital India”, extrapolated to 2031 with sentient AI robots, is ripe fodder for a sci-fi series. But OK Computer has none of the book's satirist powers or the intellect to imagine the latter world.

Its creators have digested some of the world's leading sci-fi works, but what they've produced is essentially the series equivalent of Deep Thought's answer. It's Pav Bhaji.

All six episodes of OK Computer are now streaming on Hotstar and Disney+ Hotstar.