An all-in-one Spider-Man movie is at once nostalgic and self-serving. 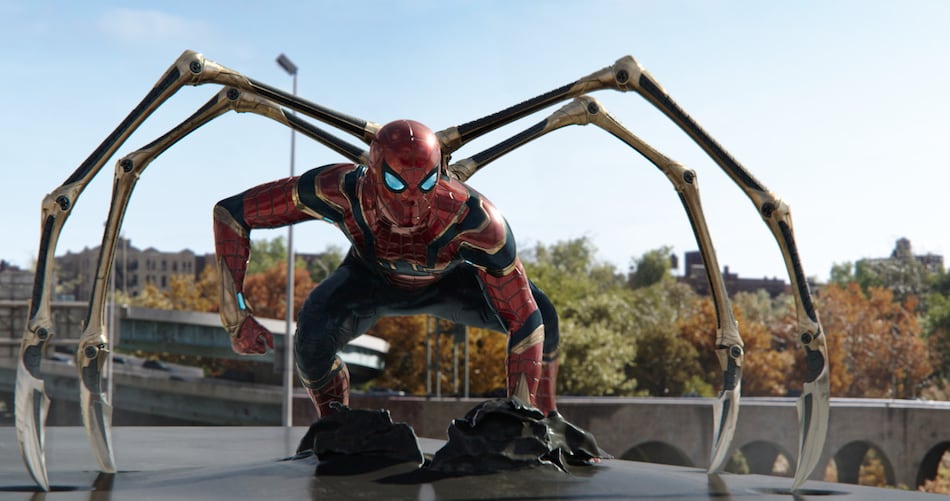 Tom Holland as Spider-Man in Spider-Man: No Way Home

This allows Spider-Man: No Way Home — from returning director Jon Watts — to take a nostalgic trip down memory lane, though I wouldn't go so far to say that it's standing on the shoulders of giants. To be fair, many of the villains No Way Home brings back come from some terrible (The Amazing Spider-Man 2) and forgettable (Spider-Man 3, The Amazing Spider-Man) Spider-Man movies. That said, Spider-Man: No Way Home does its best to cast them in a new light and redeem them as best it can. Dafoe and Molina naturally fare better, the latter being part of what is still one of the best superhero movies of all time. But though it might feel like the universe is expanding — we have a proper multiverse — really, the Spider-Man universe is collapsing on itself in No Way Home. There are no new characters introduced in this round.

That said, Spider-Man: No Way Home does try to deepen the Peter Parker myth. As one of the youngest superheroes around — Tom Holland's Spider-Man, still in the final year of high school, is the youngest live-action version — Parker still retains the view that there is some good in everyone. He's thoroughly optimistic, albeit short-sightedly naïve. At its heart, the new Spider-Man movie — written by the returning duo Chris McKenna and Erik Sommers — is about Peter truly grappling with what it takes to be morally good. Like how much can you endure before you break and drop what you stand for. If you're going to live by your principles, some sacrifices must be made to save others. Parker's aunt May (Marisa Tomei) believes that helping one person is like helping everyone — but at what personal cost?

All You Need to Know About Spider-Man: No Way Home

Spider-Man: No Way Home sends Holland's Peter Parker to some dark places, though it's never too far away from another crumb of nostalgia it can't dangle in your face soon after. It's like bits of pathos are mixed in with dollops of, “Oh look, fond (and not-so-fond) memories of other Spider-Man movies.” After all, there's the bigger matter of how this — the return of actors from old Spider-Man movies — all feels very much like a cynical commercial enterprise. Spider-Man: No Way Home ends in a slightly reassuring way that feels like Sony Pictures might be happy to put a lid on things, but we've always known that nothing is hallowed or permanent for Hollywood. They will dig up and exhume whomever they want, even if they must do so via hokey digital means.

Picking up right where we left off in Spider-Man: Far From Home, we find Parker's regular life upending in front of his eyes. Cameras and attention follow him everywhere — he's the most famous person in the world now, we are repeatedly told — with some even coming for him, believing that he really did kill Quentin Beck/ Mysterio (Jake Gyllenhaal), the Far From Home holograph-specialist villain who presented himself as a dying hero to the world by manipulating footage. More importantly for Parker though, it's impacting the lives of those around him: his girlfriend MJ (Zendaya) and best friend Ned Leeds (Jacob Batalon) are rejected from colleges, and he and his aunt have to move homes to stay safe. Having had enough, Parker comes up with the worst possible idea.

As you might have already glimpsed in the Spider-Man: No Way Home trailers, Parker asks Dr. Stephen Strange/ Doctor Strange (Benedict Cumberbatch) to cast a spell that would make people forget that Peter Parker is Spider-Man. Set aside the stupidity around Peter asking for such a crazy favour — there are so many superheroes who have to live with the burden of their identity being in the open — what makes it more insane is how casually Doctor Strange agrees to his request. Strange waves off Wong's (Benedict Wong) warnings by saying they have used such spells for much tinier stuff in the past. Okay then. But invariably, things take for a turn for the worse after Parker realises that he's not properly conveyed his request: the spell Strange is casting will make everyone forget Peter Parker is Spider-Man. You know, including MJ, Ned, and May.

From Spider-Man: No Way Home to The Witcher Season 2, What to Watch in Decemeber

This would be hilarious were we not dealing with characters who wield such powerful reality-shattering magic in the power of their hands — or are friends with characters who wield reality-shattering magic. But the planning in Spider-Man: No Way Home is just generally stupid for the most part. Parker regularly makes dubious choices upon dubious choices that allow the No Way Home plot to propel. That he trusts villains who are trying to kill him, and who have opposed others like him in their own universes, speaks volumes of how easily he trusts. Spider-Man: No Way Home only works if you just accept the journey you're being taken on, because its internal logic falls apart too easily. Some of it is played for laughs, but someone needs to knock some sense into the heroes eventually.

Spider-Man: No Way Home also never really justifies that Peter needs to go down the route he chooses for himself. He just throws himself into situations without caution. If Parker really is being seen like the villain by the world all because of how the Mysterio reveal is being spun, I'm sure there's a lot out in the world to counter that narrative. Why aren't any of the Avengers (or whatever is left of them) stepping up to the plate to defend Parker? Though at some level, the fact that misinformation can become so pervasive — the face of it, J. Jonah Jameson (J.K. Simons), is modelled after a far-right conspiracy nut like Alex Jones — does say something about our own world.

And it's not clear if Spider-Man: No Way Home gains enough by merging the three Spider-Man eras. It knows it's asking a lot of its audience at times, which is why the villains deliberately talk out loud about their past as if they are introducing themselves in case the viewer doesn't know them. Marvel Studios and Sony Pictures want everyone to follow along, clearly. The former has expected fans to watch all of its movies (and now also TV shows), but with this, they must have seen five other Spider-Man movies as well to properly enjoy?! There are other characters too in Spider-Man: No Way Home, for which you require more knowledge outside of the Marvel Cinematic Universe. You could just take them at face value for they are introduced just to be used later down the line in other Marvel titles.

New Spider-Man Trilogy, With Tom Holland, in the Works at Marvel and Sony Pictures

And despite being the third-longest MCU movie with a 148-minute runtime, Spider-Man: No Way Home doesn't really have the time to build on the villains. Sure, there's a lot of poking fun at how this universe is supercharged compared to the other ones — there's all sorts of magic here, and we have the Avengers (“Are they a band?” a beloved character jokes) — and jokes aimed at the names and origin stories of the villains (Otto Octavius? LOL. You fell into a vat of eels? Hah. You fell into a supercollider? Damn.) But the actual additional character layering is precious little in fact.

Moreover, with so many characters that need screen time, Holland once again plays second fiddle and supporting status in his own movies. We also lose much of the world created around Holland's Spider-Man in the last two movies. The fact that Parker is in the last year of school doesn't matter at all. Save for MJ and Ned, whose presence also seems questionable from time to time, there's exactly one scene for the rest of the lot: his other classmates and his teachers. May's boyfriend Happy Hogan (Jon Favreau) gets a couple of scenes, and May a few more than that.

The big question of whether Spider-Man: No Way Home stands on its own two feet is rather impossible to answer given how deeply it is woven into the fabric of five other Spider-Man movies. But more crucially, it is immaterial. No Way Home is proof that with the help of Marvel Studios, Sony Pictures is able to dream bigger now. It never lacked the appetite but it had always lacked the creative chops to do so. Now, with the guidance of the shared film universe master — Marvel did a fake-out with these multiverse shenanigans in Far From Home, before introducing them on Loki — it's finally delivered a Spider-Man movie that's at once a mouth-watering prospect for financial analysts, and a button-pushing treat for Spider-Man fans of all ages.

There's joy in seeing the old be remixed with the new. But it's also one of diminishing returns. Rather than tell completely new tales, today's film executives are so big on IP that they are now reaching into their own past. The Flash, releasing in November 2022, is about to do something similar for the DC Extended Universe — with Michael Keaton's Batman dropping in from the 90s, and Ben Affleck's version from the DCEU itself. It might even draw in Robert Pattinson's Batman from The Batman, out in March 2022. Who can really say? What Spider-Man: No Way Home shows is that Hollywood can and will not let anything rest forever.

By bringing together all their previous Spider-Man movies into one whole, Sony Pictures is breathing new life into them again. (It's why we are seeing new 4K Blu-ray releases of older movies, alongside dozens of new toys and unfathomable merchandising opportunities.) And by handing a weird clean slate to Holland's Parker — one might argue it's a lesson in loss, grief, anger, and the true effect his life has on those around him — Sony and Marvel have set up their Spider-Man franchise in such a way that by the end of this movie, the friendly neighbourhood superhero could literally go anywhere. Because for Parker, with great power might come great responsibility, but for Hollywood, with great power simply comes more greed.

Spider-Man: No Way Home is out Thursday, December 16 in India in English, Hindi, Tamil, and Telugu.