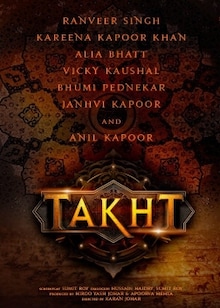 Takht is a multi-starrer historical-action drama set in the Mughal Era, with a prime focus on the infamous enmity between his sons Aurangzeb and Dara Shukoh, who got into a gruesome battle of succession after Shah Jahan's health decayed. As mentioned in several historical accounts, Aurangzeb (Vicky Kaushal) had a corrosive loathing for his elder brother Dara (Ranveer Singh), who was a liberal Muslim, spotted frequently in the company of yogi, sanyasis and brahmins. Dear to both Shah Jahan (Anil Kapoor) and his elder sister Jahanara Begum (Kareena Kapoor Khan), who was a celebrated name in the Empire herself, Dara was a natural choice for the next successor- an idea that Aurangzeb couldn't stand. Meanwhile, Roshanara Begum (Bhumi Pednekar)- his other sister had a secret sore spot for Jahanara Begum for always being overshadowed by her popularity and glamour. With a deeply ingrained hatred and infuriation, she decides to help Aurangzeb in his vicious plans of battling Dara, imprisoning Shah Jahan, and taking over the Throne himself.