Cricket 22 will be released on PC, PS4, PS5, Nintendo Switch, Xbox One, and Xbox Series S/X. 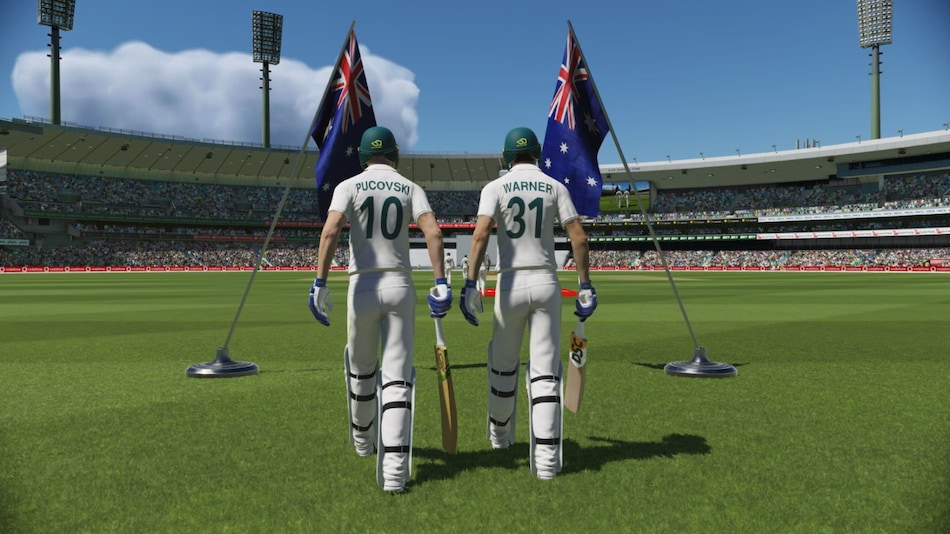 Australia's Will Pucovski and David Warner in Cricket 22

Cricket 22 is the latest iteration in the popular cricket video game franchise by Big Ant Studios. It will be the first game in the series to be available for the next-generation consoles: PlayStation 5 and Xbox Series S/X. Cricket 22 will have Pat Cummins and Meg Lanning — captains of Australia's men and women teams, respectively — on the cover. Though that wasn't always the case. Tim Paine, the ex-captain of the team, was replaced with Cummins on the game's cover in the light of his involvement in a recent scandal.

Big Ant Studios has described Cricket 22 as the studio's “most detailed cricket simulation”. The game is being released in time for the upcoming Ashes — a biennial test series played between Australia and England — taking place in Australia this year. As such, it's officially titled Cricket 22 : The Official Game of The Ashes.

In addition to PS5 and Series S/X, Cricket 22 will also be available to play on PC, PlayStation 4, Nintendo Switch, and Xbox One. Here's everything you need to know about the latest title in the Cricket franchise.

Earlier slated to release on November 25, Cricket 22 will now release on December 2 at 12:01am as per your local time zone. Speaking on the delay, Big Ant CEO Ross Symons said that “there was a critical day 1 patch that players will need to enjoy the full Cricket 22 experience that has consequently needed to be revoked.” Symons further added that both physical and digital copies will get delayed.

Cricket 22's last-minute delayed was also due to a scandal involving Australian cricketer Tim Paine. Paine resigned as the captain of the men's cricket team after he was recently found to have sent lewd messages to a colleague from the women's cricket team in 2017. He was also on the original cover art for the game but Big Ant Studios had to redevelop “the cover art, other visuals, and team lists.”

Cricket 22 is also releasing for Nintendo Switch but it will only be released in January 2022. This will make the popular cricket video game franchise one of the few major sporting titles on the handheld console.

Is Cricket 22 on Steam?
The latest Cricket title from Big Ant Studios is listed on Steam. At the time of writing, the early access game — a demo version, of sorts — is available and comes with a note that says that it is not yet complete. You can pre-order Cricket 22 at Rs. 2,999 on Steam to get early access.

Cricket 22 is priced at Rs. 3,999 in India and AUD 99.95 (roughly Rs. 5,350) across platforms. Players who pre-order the game would receive Cricket 22 Nets Training, Batting and Bowling mini games, and online leaderboards.

The game is also available to pre-order and can be purchased through Cricket Australia's online store for Nintendo Switch, PlayStation, and Xbox for AUD 99.95. It is listed as currently unavailable on the Microsoft Store, with a Rs. 3,999 price on the main page. There is also no listing for Cricket 22 on the Nintendo Store as of now.

Big Ant Studios also mentioned that Cricket 22 was available to pre-order through the PlayStation Store but had to be removed due to the delay. Furthermore, Big Ant CEO Symons said he's not confident that will be returning to Sony's games store for pre-order but said “I am confident it will be for sale at 12:01am on 2 December in your local timezone.” However, the game is still listed on PlayStation Store.

Players can pre-order the physical edition in India through Game Loot, Games The Shop, and Prepaid Game Card.

Cricket 22 is releasing on December 2 and players can preload the game before that so that they can enjoy the game as soon as it is released. However, as of now only Xbox has announced that the game is available for preload on Xbox consoles. Players should note that pre-loading the game will not give them early access to it.

Steam mentions the minimum and recommended requirements for Cricket 22 for PC players.

Furthermore, players would also need a minimum of 45GB of onboard storage free on their PCs that run at least Windows 10.

As for the gameplay, Big Ant Studios has announced that it worked on fan feedback to improve the franchise.

Being a portable console, the gameplay on Nintendo Switch is expected to be slightly different than on PC, PlayStation, or Xbox. Since Cricket 22 has been made keeping the next-gen consoles in mind, it is safe to assume that it will come with better graphics on PS5 and Xbox Series S/X compared to other platforms.

There has been no announcement of an embargo on the review of Cricket 22. That said, the first reviews should be available around the time of release.