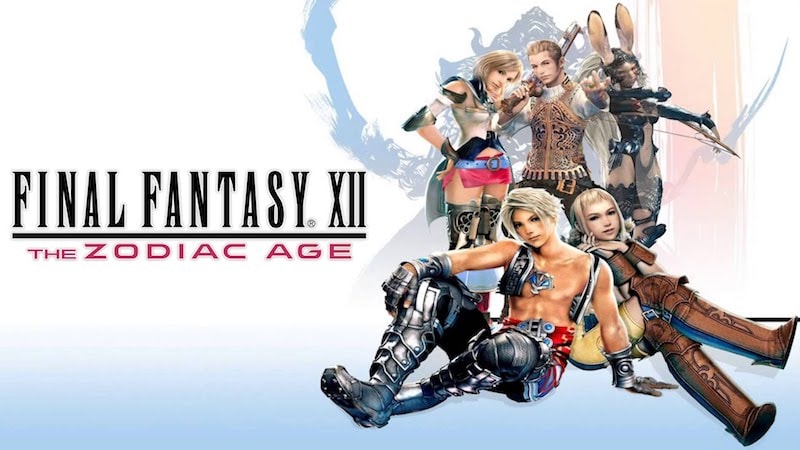 The world of Final Fantasy XII: The Zodiac Age is Ivalice. Roaming its many locales has you interacting with a wealth of non-humans such as lizard-type creatures and a furry, winged race known as Moogle (a staple of the series). You'll cast magic spells and giant airships feature through the game. It's a heady mix of magic and sci-fi that manages to stay fresh through the duration of your playthrough.

As for the plot, Final Fantasy XII: The Zodiac Age has a group of ragtag heroes who set out to free the country of Dalmasca from the clutches of the Archadian Empire, which took it over by force.

During the journey, you'll learn much more about the history of Ivalice, the strange forces at play behind the scenes, and, of course, the origins and motivations your characters, particularly the swashbuckling support cast such as Basch, a disgraced knight of Dalmasca; pirate Balthier who appears to be the Final Fantasy equivalent of Han Solo; and his partner, the rabbitlike Fran.

They form a rather intriguing bunch, especially when compared to the game's lead, Vaan, a street urchin with dreams of commanding his own airship. He fits into the stereotypical almost androgynous male youth mould and isn't as interesting as the rest of Final Fantasy XII's crew.

This is far from a problem though. Unlike other Final Fantasy games, the events of Final Fantasy XII: The Zodiac Age play out on a grand scale. They're replete with political intricacies and scheming galore, kind of like Game of Thrones minus the R-rated scenes. Fraught with twists and turns that would leave you guessing, it's a treat to watch this masterpiece of plot unfold before your very eyes.

Although the story and setting hold up, the visuals are a mixed bag. Like most remasters, the most obvious enhancements are visual. It looks clean for most part, minus any of the jagged edges and blurriness from the PS2 version, which is to be expected considering how much more powerful the PS4 is.

From sewer passageways to grand airships, Final Fantasy XII: The Zodiac Age's environments are solid. Even its many open-world areas hold up well, even though some quirks like being unable to hide in the grass or jump off ledges or cliffs exist, a holdover from the game's PS2 days. Despite being over a decade old, Iconic vistas such as the dusty streets of Rabanastre and the floating city of Bhujerba don't look out of place thanks to the art direction.

However, when Final Fantasy XII: The Zodiac Age takes control away from you and shifts to cutscenes to tell its tale is when things go askew. Facial details on characters tend to be watered down up close and the odd aspect ratio - which results in a generous portion of your display sporting a black bar below even if there are no subtitles - do make it a bit jarring. It is further compounded by the fact that its many pieces of voiced dialogue don't exactly sync with the lip movements of those onscreen. You can go all the way up to 4K if you have a compatible TV, but, unlike Final Fantasy XV and XIV, you can't choose between enhanced visuals/ better frame-rate via the settings. This is not something you expect from a game that claims to offer PS4 Pro support. As for the frame-rate itself, it appears similar to what Final Fantasy X/X-2 HD Remaster had with 30fps.

Nonetheless, these technical missteps are minor concerns. The music in Final Fantasy XII: The Zodiac Age holds up well. Be it the original tracks or their re-recordings, they're great to listen to even when you're not playing the game.

Aural additions aside, your progress is auto-saved as you move from one area to another, removing the dependency on playing until you reach a save point, and fast forward - which lets you speed through the game world - makes Final Fantasy XII: The Zodiac Age's quests all the more palpable.

Perhaps the biggest inclusion to Final Fantasy XII: The Zodiac Age is in how you customise and make your characters stronger. Borrowing from the Japan-only Final Fantasy XII: International Zodiac Job System for the PS2, you can assign roles to characters, giving them specific skills. For instance, choosing the mage job allows the casting of magic, while being a knight gives the character access to heavier armour. This is coupled with a license system that lets you equip characters with gear specific to the job type.

Furthermore, each character can switch between two jobs. It's a welcome change, particularly for those of us who played through the original, as towards the end of that game characters didn't have as much distinction between them and the game became crushingly easy. All of this adds another dimension to Final Fantasy XII: The Zodiac Age's combat.

Speaking of which, that's another facet of Final Fantasy XII: The Zodiac Age that's still entertaining. Unlike prior entries - where battles were mostly random, turn-based affairs - this one follows a rather realistic approach where you see your enemies on screen and fight them in actual game context. Added to this are gambits, an automated set of actions for each of your characters during battle. Suppose you want to be healed every time your health goes down by seventy percent, all you have to do is set the required gambit for it.

Battling might not have the fast real-time approach we've seen in Final Fantasy XV, but Final Fantasy XII: The Zodiac Age holds its own, giving you a slew of options to wage war on your terms. The difficulty seems to be toned down too, making encounters with the game's many bosses such as the Firemane and Judge Ghis a lot easier than what they were in the original.

And then there's Trial Mode, which lets you fight through over 100 battle scenarios outside of the main game. This is a neat touch for those wanting to experiment more with the nuances of Final Fantasy XII: The Zodiac Age's battle system as you'll have to constantly revaluate your gambits and strategies as you progress.

As it stands, Final Fantasy XII: The Zodiac Age is a remaster worth checking out. It might not be the best looking re-release of a classic, but there's more than enough for fans and first-timers alike to revel in.