Free Basics vs. Free Internet: Your Guide to the Raging Net Neutrality Debate 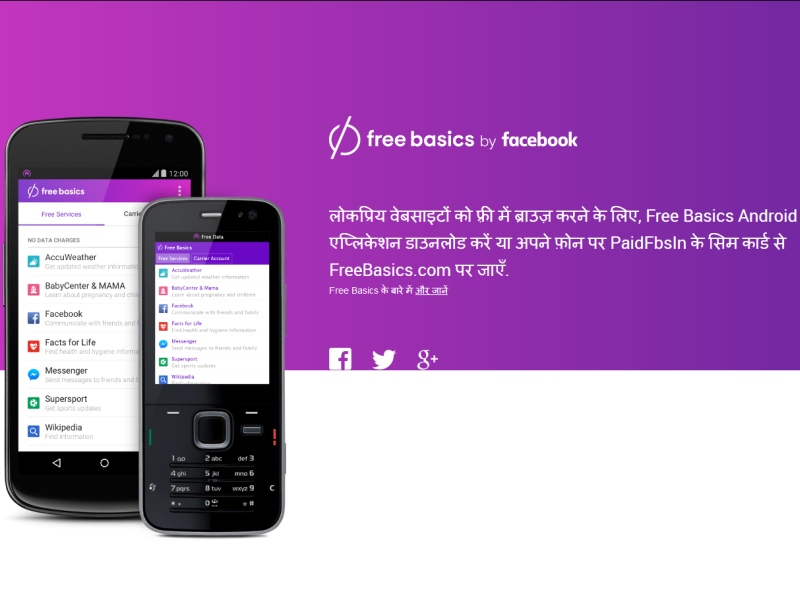 Free Basics, Facebook's non-profit initiative that aims to bring Internet connectivity to the underprivileged in developing regions, has run into trouble in India. Under Free Basics, Facebook is offering a range of services for free to thousands of users, but advocates and enthusiasts in the country are strongly encouraging users to discard Facebook's initiative. Why? 'Network neutrality' or 'net neutrality' is the reason - a concept that says a public network should treat all content, sites, and platforms equally.

It is around these questions that the net neutrality debate is raging across India and the world. In this article, we guide you through what net neutrality is, as well as the raging debate in India, while also pinpointing the developments that have taken place in this space.

But what is net neutrality?
The idea behind net neutrality is simple - treat all sites equally to give everyone a fair chance at growth, and reject the idea of monopolies. The term net neutrality was first coined by lawyer and scholar Tim Wu in 2003 in an academic paper also titled 'Network Neutrality, Broadband Discrimination,' which said that Internet service providers must treat all traffic on their networks equally.

In an updated definition on his site, Wu elaborates: "Network neutrality is best defined as a network design principle. The idea is that a maximally useful public information network aspires to treat all content, sites, and platforms equally. This allows the network to carry every form of information and support every kind of application. The principle suggests that information networks are often more valuable when they are less specialised - when they are a platform for multiple uses, present and future. (For people who know more about network design, what is just described is similar to the "end-to-end" design principle)."

Essentially, a telecom provider such as Airtel must not block or throttle access to any service on its network, even if Airtel directly or indirectly (via one of its partners) competes with the service. Alongside, offering a limited set of services for free (with no data charges) is also being considered against the concept of net neutrality, by edging out non-partnered services.

The first debate that rose around net neutrality earlier this decade revolved around data throttling, a practice that saw Internet service providers partnering with certain apps and websites to offer faster access to their users, with slow or blocked access to rival apps and websites. This concept of fast and slow lanes has since been outlawed in many countries, and almost everyone agrees it's against the concept of a free and fair Internet.

More recently, the debate on net neutrality shifted from a no-throttling and no-blocking clause to zero-rating platforms, where operators do not count the traffic generated by their own or partners' services against the end-users' monthly data caps. When telecom operators provide access to certain services for free, other players are put at an enormous disadvantage. In essence, they're turning the internet Into something like a cable TV subscription service with packages a user can subscribe.

Proponents of net neutrality find zero-rating platforms in violation of the principles regardless of whether a platform is paid for by partners, or is free - like Free Basics is claimed to be. The idea behind net neutrality is that the Internet should remain a level playing field for all.

So, what is Facebook's Free Basics?
First of all, it wasn't called Free Basics until September 2015. Formerly, it was known as Internet.org. The initiative is meant to provide free access to the Internet to the underprivileged in developing nations. Facebook has launched the initiative in 15 nations thus far, including India, where it debuted Internet.org in February this year in partnership with RCom, the fourth largest carrier in the country. 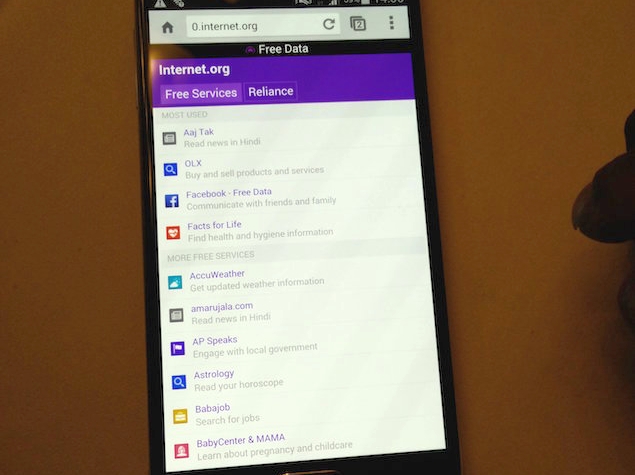 Earlier this year, Airtel announced a new service called Airtel Zero which allowed subscribers free access to certain apps and services. As per the program, the cost of data traffic was to be incurred by the app maker or service provider.

(Also see: What Net Neutrality? VoIP Calls Such as Skype Could Cost Extra on Airtel)

This was also considered to be against the essence of net neutrality, as Internet giants could easily afford to participate in such programs, putting new players at a disadvantage. After much pressure, Airtel appears to have withdrawn the plan completely after a slew of companies left when faced with the public outcry. The company had come under fire late last year as well, when it had unveiled VoIP calling plans - seeking to charge customers higher rates for using voice over data.

It is here that the debate on differential data pricing and the regulation of over-the-top services, such as VoIP and messaging services, began. A Department of Telecom (DoT) panel report a few months later opposed projects like Facebook's Internet.org in its recommendations, while suggesting that similar plans such as Airtel Zero be allowed with prior clearance from Telecom Regulatory Authority of India (Trai).

What's the problem with Free Basics?
The bone that net neutrality activists have to pick with Free Basics is that it is a zero-rating platform, in that it provides free access to a limited number of services, but not to all. That it's not bringing unlimited access to the Internet to people, but access to a very small subset of the Internet. In India, for instance, the company with RCom was to offer access to 38 websites and services. These services included some news providers, some entertainment websites, and some infotainment websites, but each of their competitors was left out in the cold, with users having to continue to pay to access them. Reliance users across the country can access these pre-selected services for free, through this has now been put on hold following a directive issued by Trai.

But as we've pointed out before, Free Basics users can't access websites and services that aren't currently approved by Facebook. This approach defeats the basic fabric of net neutrality - Facebook defends itself on this front however, saying any websites and services can apply to be a part of Free Basics, while any telecom operator can offer it to their subscribers. It has also maintained that joining up is free, and that current partners have not paid it to be part of the Free Basics platform. This doesn't answer the question of why the platform has the concept of approval and rejection at all.

At the heart of this debate against Free Basics is if a zero-rating platform itself violates net neutrality, and in Facebook's specific case, whether even the supposed good intentions of a free platform meant for the underprivileged in developing nations can lead to real benefits, or whether the cons of a limited access platform outweigh them.

The motives behind a charitable enterprise from a multinational corporation - in this case, one of the largest Internet companies in the world - are a stretch to fathom, with profit margins and growth rates typically their concern. Maybe if Facebook itself wasn't one of the services offered free as part of the platform, the debate might have been different. To quote Peter Thiel, "Monopoly is the condition of every successful business," and Facebook stands to win big over its competitors if Free Basics is allowed to operate in India in its current form.

And that's the crux of the argument against Facebook's Free Basics. The service is offering access to a limited number of websites for free - critics say that it should instead offer access to every website on the Internet.

What are the experts saying?

Perhaps no-one's opinion is as significant as that of Tim Berners-Lee - the man who invented the World Wide Web. Berners-Lee earlier this year advised users to say no to zero-rating programs such as Free Basics. He added that anything offered in the name of the "Internet" which isn't the "full Internet", isn't really free and public.

Speaking with Gadgets 360, Microsoft India Chairman Bhaskar Pramanik voiced a similar opinion. He noted that while he believes Facebook's intentions behind Free Basics are noble, there are obvious concerns around net neutrality that the project has failed to address and fix thus far.

Meanwhile, Facebook insists that its intention with Free Basics is to bring the power of the Internet to everyone, leading to everyone's development, and growth of the nation. It's obvious however, that some amount of regulation is required to ensure companies do not get unfair advantages in the market.

How does the regulation work?
The good thing is that Facebook doesn't have the authority to do whatever it desires, and that authorities are taking public opinion into account before they pass a network neutrality regulation. Trai, the independent regulator of the telecommunications business in the country, regulates all Internet access in India and is seeking our opinion on whether Free Basics or any other programs should be introduced, with its latest consultation paper.

Several groups have come together to make people aware of the shortcomings in Facebook's initiative, and take a stand against it. Save the Internet, a group of enthusiasts, has made it easier for users to show their disapproval and quickly send an email to Trai. India's comedy supergroup AIB (All India Bakchod) has also made videos to condense the narrative and explain what's happening in a simple and funny way.

Many have so far stood to voice their opinion against Free Basics initiative. Addressing growing concerns from users, this week, Trai asked Reliance Communications to temporarily suspend the Free Basics service, and the telecom operator has obliged. But this month, Facebook, which has a much wider platform and audience, has aggressively been promoting Free Basics in the country. It is also running advertisements in newspapers, televisions, and putting up hoardings at bus stands as well as flyovers in many Indian cities.

Facebook is also notifying users, asking them to support the project. Recently, it "accidentally" asked its US users to support Free Basics in India. The company says that more than 3 million people have showed support for Free Basics.

What can you do?
Trai is inviting comments on a consultation paper on "differential data pricing," where users are charged different amounts (or not at all) depending on which app, website or service they are consuming data on. Users can email advisorfea1@trai.gov.in and share their view until December 31. If you are against Facebook's Free Basics, you can email your comments to Trai directly at the above mentioned address or you can go to SaveTheInternet.in to quickly send a pre-written response in this regard.

Written with inputs from Abhinav Lal