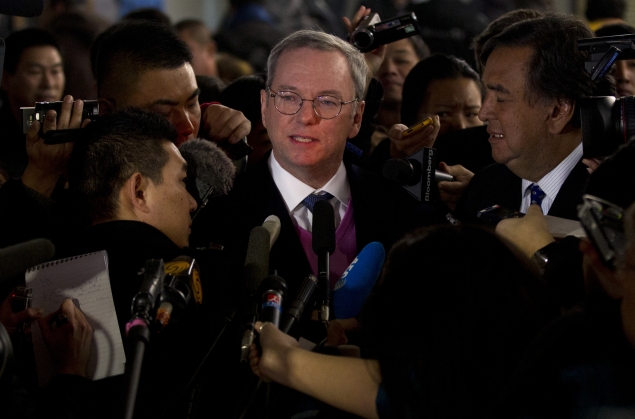 Google executive chairman Eric Schmidt called on China to open up Internet access and voiced concern at its latest crackdown on online freedoms in an interview in Hong Kong Monday.

"I have a strong opinion and my opinion is there should be freedom of speech to pursue one's goals for ideas," he told the South China Morning Post.

Schmidt was visiting as part of a programme to encourage young entrepreneurs in the city.

He said China would need to open up in order to grow and criticised the mainland's latest move against "online rumours", which could mean prison for authors of defamatory messages re-posted 500 times.

"Google believes very strongly in a free Internet. The mainland just passed the law about the 500 reposts thing. Then you will definitely think about it before you write. It's a problem, (it) means your voice is not fully heard," said Schmidt.

He also attacked China's one-child policy, calling it a "terrible mistake" because it had led to an ageing population.

"We want more Chinese people, not fewer. You need to stop it now. You should have stopped it 10 years ago," he told the SCMP.

In a separate interview in Hong Kong Monday, Schmidt told the Wall Street Journal that China's Internet censorship meant Google had no current plans to expand there.

Google abandoned its Chinese-language search engine in mainland China in 2011 and transferred it to Hong Kong.

"China's censorship regime has gotten significantly worse since we left, so something would have to change before we come back," he told the Wall Street Journal.
Comments