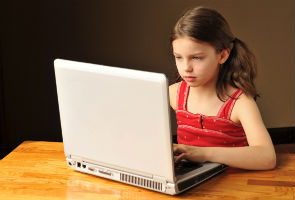 Highlights
Increasing use of Internet and access to a host of mobile devices are making Indian parents wary of their kids being exposed to the risks of the virtual world, a survey by global security technology firm McAfee revealed.

"A survey we undertook recently in 10 major cities across the country showed that 62 per cent of affluent kids in the age group of 4-12 years have an e-mail ID, while 58 per cent of them have an account on social networking sites," McAfee India director V. Krishnapur told reporters on Wednesday.

Of the 500 affluent kids having e-mail IDs, 67 per cent were 4-8 years old and 64 per cent having an account on social networking sites were 8-12 years old.

"The findings are crucial for Indian parents as they indicate how their children are getting hooked online at such a tender age and becoming vulnerable to the risks of getting exposed to cyber attacks such as hacking, stalking, bullying and thefts and disclosing personal information, including pictures, address, phone numbers and e-mail IDs to others," Krishnapur asserted.

"As the Internet evolves into a new platform for self expression and social interaction, children will be prone to indulge in information exchange leading to increasing rate of cyber exploits. Hence, parents need to use protective technology to understand, handhold and mould our children's online persona and behaviour," said Anindita Mishra of McAfee Cybermum India, the company's platform to blog about the dangers children face online.

The research also noted that 32 per cent of the parents surveyed knew that their kids were sharing information online and 42 per cent of parents of 9-12 age group believed that their kids would have shared personal data such as home address, contact number and the city in which they reside with their virtual friends, strangers and the unknown.

"All parents admitted to having allowed their kids between 4-8 years access to the internet signifying that even the youngest demographic of children are able to get hooked online. In Delhi, for instance, 50 per cent parents allow their kids to spend more than 10 hours a day on the internet," Krishnapur pointed out.

While 56 per cent parents are concerned about their children in 13-17 age group being misguided online, 42 per cent parents of 4-8 year olds feared that their kids could be exposed to adult material.

"Only 25 per cent of parents trust their children online without monitoring them, though the trust levels increase as their kids get older. A healthy 73 per cent parents counselled their children on the do's and don'ts of using Internet," Krishnapur noted.

The findings also revealed that of the 10 cities surveyed, parents in Bangalore and Ludhiana had the least awareness of their kids' online activities whereas Pune had the highest transparency level at 84 per cent.
Comments