Parag Agrawal, an IIT Bombay and Stanford alumnus, joined Twitter in 2011 when there were fewer than 1,000 employees. 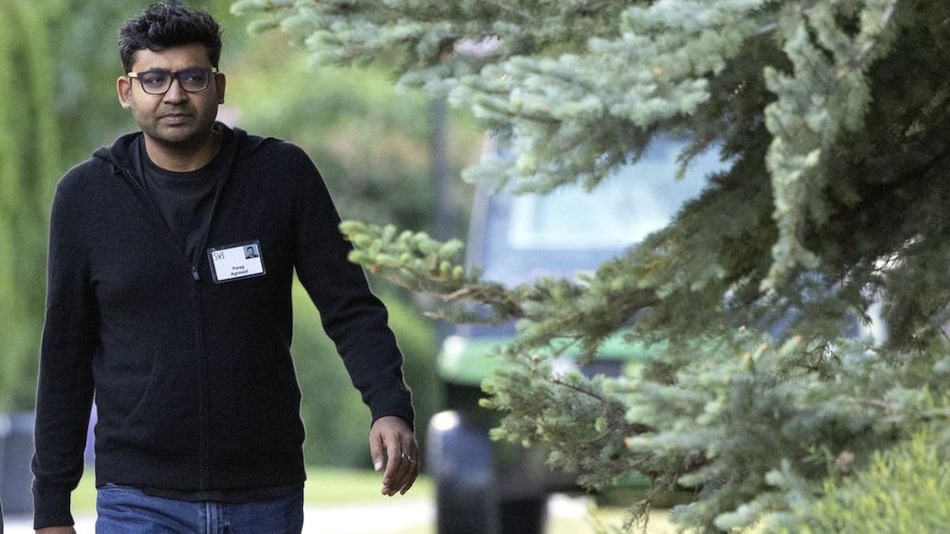 Parag Agarwal, Elon Musk had a heated text exchange after SpaceX head was offered to join company board

When Parag Agrawal was appointed CEO of Twitter in November 2021, the IIT graduate joined a steadily growing club of executives from India rising to the top of global corporations, but the 38-year-old executive's brief tenure at the helm of the social media giant was challenging and chaotic. Less than a year into his job as CEO, India-born Agrawal was ousted from the company by its new owner billionaire Elon Musk who on Thursday closed the $44 billion (roughly Rs. 3,37,465 crore) deal to acquire the social media behemoth.

An IIT Bombay and Stanford alumnus, Agrawal joined Twitter in 2011 when there were fewer than 1,000 employees. Rising in the company, he became Twitter's chief technology officer in 2017. Considered a protege of Twitter co-founder Jack Dorsey, Agrawal was appointed CEO of Twitter after Dorsey stepped down.

In announcing his decision to step down and name Agrawal as CEO, Dorsey had said at the time “my trust in him as our CEO is bone deep.” Dorsey had said that Agrawal had been his choice for CEO for “some time" given how deeply he understands the company and its needs. "Parag has been behind every critical decision that helped turn this company around. He's curious, probing, rational, creative, demanding, self-aware, and humble. He leads with heart and soul, and is someone I learn from daily.” Ajmer-born Agrawal's ascent to the top job at Twitter put him in a steadily growing club of executives hailing from India helming global corporations, including Microsoft CEO Satya Nadella, Alphabet CEO Sundar Pichai and Adobe CEO Shantanu Narayen. Indra Nooyi had served as PepsiCo's CEO for 12 years before stepping down in 2018.

According to a May 2022 report in The New York Times, if Musk removed him as chief executive, Agrawal could make $60 million (roughly Rs. 495 crore), as per securities filings.

Agrawal's time as Twitter CEO was challenging and turbulent.

Just a few months into the job as CEO, Musk came into the picture. As per a CNN Business report citing a regulatory filing in March this year, Musk had met with Dorsey to “discuss the future direction of social media.”

“In the days that followed, Musk met with Twitter's board and some of its leadership team, including Agrawal; publicly announced that he'd become Twitter's largest shareholder; and accepted a seat on the company's board,” the CNN report said.

Musk tweeted a few days later that “Is Twitter dying?”.

The CNN report added that according to a court filing in late September, Agrawal had texted Musk responding to his tweet.

"You are free to tweet ‘is Twitter dying?' or anything else about Twitter,” Agrawal had said in the text to Musk “but it's my responsibility to tell you that it's not helping me make Twitter better in the current context. Next time we speak, I'd like you to provide (your) perspective on the level of internal distraction right now and how [it's] hurting our ability to do work … I'd like the company to get to a place where we are more resilient and don't get distracted, but we aren't there right now.” Musk had responded to Agrawal saying: “What did you get done this week?” In two follow-up texts, he rescinded his agreement to join the board, saying, “I'm not joining the board. This is a waste of time.” He added: “Will make an offer to take Twitter private,” according to the CNN article.

On Agrawal's challenges to manage a "restive work force and deal with Twitter's mounting economic” woes before likely being “booted” from the company, The New York Times had quoted Bob Sutton, an organisational psychologist and professor at Stanford University, as saying that “there's no one in the world who would want to be in those shoes.” The NYT article said that as Twitter's chief technology officer, Agrawal “worked on some of Twitter's complicated technical challenges and built relationships with his engineering peers” and Dorsey.

He shared Dorsey's “vision that Twitter's future hinged on overhauling its technology so it could rely more on machine learning and decentralize its services to give users more control over their experiences on the platform.” As the Musk saga unfolded, the NYT said in the May 2022 article that at “a virtual meeting for Twitter executives”, Agrawal “admitted he was exhausted.” “At the meeting, Mr Agrawal was “raw” about Twitter's issues and the hurricane of attention over Mr Musk's deal, two people with knowledge of the event said. But he also conveyed a sense of acceptance of his situation and said he would move forward with his plans for the company, they said,” the NYT report stated.

When he was appointed CEO in 2021, Agrawal said in a note posted on Twitter that he was “honoured and humbled” on his appointment and expressed gratitude to Dorsey's “continued mentorship and your friendship.” “While it was a decade ago, those days feel like yesterday to me. I've walked in your shoes, I've seen the ups and downs, the challenges and obstacles, the wins and the mistakes. But then and now, above all else, I see Twitter's incredible impact, our continued progress, and the exciting opportunities ahead of us,” he said.

“Our purpose has never been more important. Our people and our culture are unlike anything in the world. There is no limit to what we can do together.” “We recently updated our strategy to hit ambitious goals, and I believe that strategy to be bold and right. But our critical challenge is how we work to execute against it and deliver results - that's how we'll make Twitter the best it can be for our customers, shareholders, and for each of you.” “The world is watching us right now, even more than they have before. Lots of people are going to have lots of different views and opinions about today's news. It is because they care about Twitter and our future, and it's a signal that the work we do here matters,” Agrawal said in his note last year.