Is this a better hybrid computing solution than an iPad? 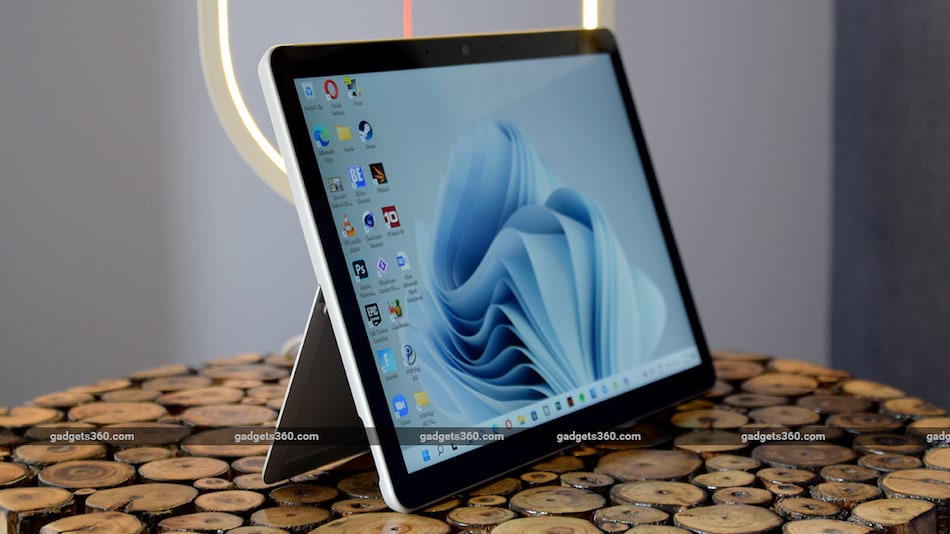 The Surface Go 3 is Microsoft's latest and most affordable tablet, and it's designed to tackle basic computing tasks. While there's no dearth of convertible Windows laptops, detachable 2-in-1s are still a rarity and usually cost a premium. This makes the Surface Go 3 quite interesting as it's priced lower than the Surface Pro line. It's also a lot more portable, hence the name.

The Microsoft Surface Go 3 is primarily a Windows tablet, which can transform into a laptop with the optional keyboard attachment. Think of it as Microsoft's version of an iPad, but running the full desktop Windows experience you're probably used to. It could be an appealing solution for anyone looking for a hybrid computer that can fulfil both work and entertainment needs, such as content consumption. Is the Surface Go worth it though? Let's find out.

Thanks to the hybrid nature of a detachable 2-in-1, the Microsoft Surface Go 3 works infinitely better as a tablet than most convertible Windows laptops with 360-degree hinges. It's around 8.3mm thick and weighs 544g, making it fairly slim and light. It can easily be carried in one hand. The matte gray finish doesn't attract fingerprints, and the metal body feels sturdy and well put-together. When used in portrait orientation, you'll find the power and volume buttons on the right, and the headphone jack, USB Type-C port, and a proprietary Surface Connect port on the bottom. The latter is used to fast charge the tablet and connect to accessories, but the Surface Go 3 can also be charged via the Type-C port.

The left side of the Microsoft Surface Go 3 has contact points for powering an optional keyboard. Unlike most tablets, the Surface Go 3 features a built-in kickstand which gives you a wide array of usage possibilities. Hidden behind the stand is a microSD card slot, which is very easy to miss since there's no inscription or marking to indicate its presence.

The Microsoft Surface Go 3 features a 10.5-inch full-HD (1920x1280) touchscreen with a 3:2 aspect ratio and Corning Gorilla Glass 3. Brightness levels are good and colours are vivid and punchy. The bezel around the display is thick enough to offer sufficient area to rest your thumbs when you hold the tablet. There's a 5-megapixel webcam, along with an infrared camera for Windows Hello face recognition. The Surface Go 3 also has a rear-facing 8-megapixel camera. You also get cutouts on either side of the display's bezel for the front-facing stereo speakers.

The Microsoft Surface Go 3 was launched in multiple variants, but only one configuration is available online, at least at the time of this review. It's the same one that Microsoft sent me, and it features a 10th Gen Intel Pentium Gold 6500Y CPU, 8GB of LPDDR3 RAM, and a 128GB SSD. This variant is officially priced at Rs. 57,999, although you should be able to find it for less online.

Other variants can be found under a separate section on Microsoft's site, called Surface for Business. These include a base variant with 64GB of eMMC storage and 4GB of RAM, and a top-end variant with an Intel Core i3-10100Y CPU. There's optional LTE connectivity with the Surface for Business variants, and they come with Windows 11 Pro. These variants can be purchased from listed resellers, but aren't easily found on regular e-commerce platforms.

For what it's worth, I think Microsoft has chosen the right configuration for consumer use, as the lower variants have eMMC storage and just 4GB of RAM, which isn't ideal for Windows. The Core i3 CPU in the top-end variant doesn't offer much compared to the Pentium Gold, only higher clock speeds for the CPU cores and a slightly better integrated GPU. All variants of the Surface Go 3 feature Wi-Fi 6 and Bluetooth 5.

In terms of software, the Microsoft Surface Go 3 ships with Windows 11 in S mode, which only lets you download apps from the Microsoft Store and use the Microsoft Edge browser, for security and management. You can easily switch to the standard mode, which will allow you to install pretty much any Windows application, but there's no going back. There aren't many preinstalled third-party apps, which is a refreshing change. You do get a trial version of Microsoft 365 Family. A full version of at least Office Home and Student would have been nice, and many of Microsoft's OEM partners offer this with their laptops.

Before we go ahead, we should talk about some of the accessories that you'll probably want to buy along with the Surface Go 3. Microsoft offers a standard Type Cover (Rs. 10,950) keyboard or a Signature Type Cover (Rs. 15,699), which is made using Alcantara fabric. Microsoft also sent me a Surface Pen, which costs an additional Rs. 9,099 in India. The pen runs on a single AAAA battery and can magnetically snap to the top of the tablet. These push the total price up considerably.

I've been using the Microsoft Surface Go 3 for a couple of weeks for both work and leisure, and I can confidently say that it easily fulfils its intended purpose. I can't speak for the base variant, but the one with the 128GB SSD and 8GB of RAM is good enough for basic computing tasks such as writing, attending video calls, responding to emails, and even a bit of Photoshop work. Windows 11 runs well, although you'll have to get used to slight lag. In my experience, this was ever-present. It was noticeable when I woke the Surface Go 3 from sleep and any time I had to navigate around the Windows UI. Heavy apps such as Photoshop do take longer than usual to load, although this worked well for me once it was up and running.

Without the keyboard, the Microsoft Surface Go 3 makes for a decent tablet. Windows is a bit of a pain to use without a stylus, and the lack of good tablet-friendly apps in the Windows Store doesn't help its case either. However, for watching content, the built-in kickstand is a lifesaver. You can set the tablet down at any angle, anywhere, and begin watching. The Surface Pen is useful for taking notes or drawing, although I'm not a big stylus user so I didn't end up using it too much. The one tablet feature I miss on Windows is the ability to turn off just the display without putting the whole device to sleep, which would allow for use cases such as listening to music.

Content consumption is a good experience on the Surface Go 3

The Surface Go 3 easily functions as a productivity machine once you attach the keyboard. The whole setup was not as easy or comfortable to use on my lap like a regular laptop, since the Type Cover keyboard does have some flex and the sharp edge of the kickstand tended to dig into my thighs after prolonged use. It did work well when placed on a stable surface, though. The keyboard keys are very comfortable for typing on, with even backlighting. The glass trackpad is also quite good.

Casual games ran well, but anything with heavy 3D graphics struggled. Fortnite, for instance, was barely playable despite lowering the graphics quality and the resolution. Asphalt 9: Legends was a bit stuttery in some places too. Audio from the stereo speakers is loud and clear. The 1080p webcam is also very good, and video is clean even in a dimly lit room. The rear camera has autofocus and is decent for an occasional photo or for scanning documents.

Microsoft claims that the Surface Go 3 can deliver up to 11 hours of runtime on a single charge, which turned out to be a little too optimistic in my experience. With non-stop use, I was able to get around four and a half to five hours, but if I took breaks in between, then I was able to stretch it to around seven hours. For a 10.5-inch tablet running Windows, it's not terrible, but it's far from ideal. I used this tablet with the keyboard connected most of the time, so without it, you could perhaps get a bit more battery life. With light workloads, frugal use, and a more conservative battery profile, you could just about get through a full workday on one charge, but it would be tough.

In our Battery Eater Pro test, the tablet (without the keyboard) ran for a reasonable 2 hours and 40 minutes. The bundled adapter lets you fast charge the Surface Go 3 to about 80 percent in an hour, which is not bad. The charger also has a USB Type-A port which can be used for charging any device.

The Microsoft Surface Go 3 might be the company's most affordable 2-in-1 Windows tablet, but Rs. 57,999 is a lot of money. One argument that often comes up is that you could get way better specifications in a standard laptop at the same price, which is true, but you can't use them comfortably as tablets. The variant I tested was adequate in terms of performance. It also has a bright display, good speakers, a high-quality webcam, and solid build quality. Battery life is a little weak, and the accessories that most people will want are relatively expensive.

If you add a stylus and keyboard, the Surface Go 3 will cost nearly Rs. 80,000, at which point the Lenovo Yoga Duet 7i seems like it could be a much more attractive deal. It has better specs, making it more of a Surface Pro competitor, and what's more, the keyboard and stylus are included.

The Microsoft Surface Go 3 is a very good little tablet with the potential to be a 2-in-1, but its average battery life and the total cost of the whole package will deter a lot of people from taking the plunge.