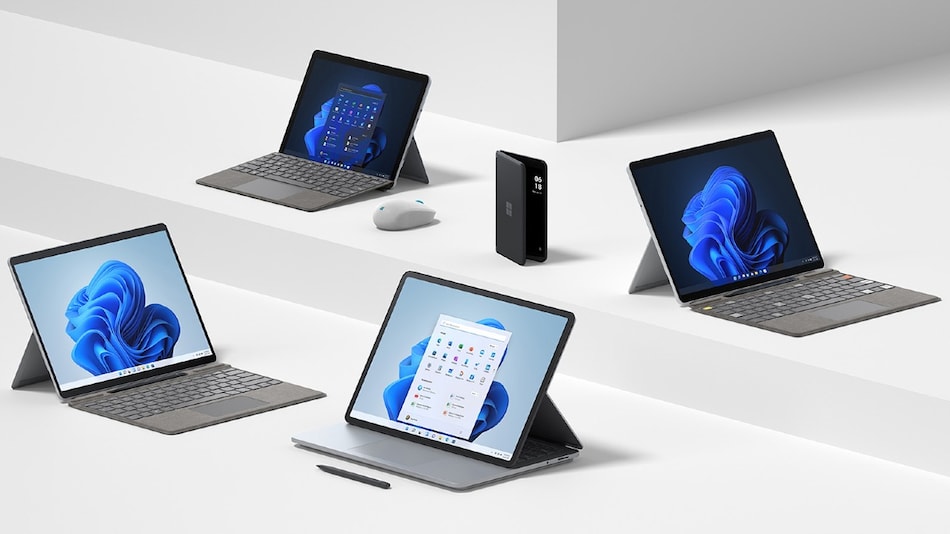 On the availability front, Microsoft said at the event that its new devices would go on sale starting October 5 — alongside the release of Windows 11. We can certainly expect some delay in the availability of the new devices in India as the official sale date is meant for the US and some other developed markets where pre-orders for the devices have already started.

The product listings on the Microsoft India site at the time of filing this story were showing that the Surface Laptop Studio and Surface Pro 8 would come early 2022, while the Surface Go 3 was tagged with a “coming soon” banner. Details about the India launch of the Surface Duo 2 are yet to be revealed.

Microsoft Surface Laptop Studio was one of the biggest announcements at the Microsoft event on Wednesday. The new device is designed as an “evolution of Surface Book” and is touted to be “built on the heritage of both Surface Book and Surface Studio.” The device is targeted at developers, creative professionals, designers, and gamers, who want a creative studio with the portability of a laptop. The Surface Laptop Studio features a 14.4-inch PixelSense display with touch support that is attached to a Dynamic Woven Hinge, allowing the display to move in multiple angles. The hinge allows the device to transform from a traditional notebook to a tablet or a canvas. However, the display is non-detachable — unlike the Surface Book 3 where you could pull the screen from the keyboard and use it as a tablet.

Microsoft has provided three distinct modes on the Surface Laptop Studio. The first one is a Laptop mode in which you are provided with a full keyboard and touchpad for a regular notebook-like experience. You can, however, move the display to the Stage mode. This comes after pulling the display forward to an angle where the keyboard is covered but the touchpad is exposed to allow gaming, streaming, docking, and presentation in an immersive way. The third mode is called Studio mode where you can move the display on top of the keyboard to use it like a canvas or for writing notes.

The Surface Laptop Studio also includes an area underneath the keyboard where you can place the Surface Slim Pen 2 that magnetically attaches and charges when not in use.

Microsoft Surface Pro 8 is essentially Microsoft's 2-in-1 flagship of this year as the Surface Laptop Studio doesn't allow users to detach its display from the keyboard. The Surface Pro 8 comes with a 13-inch PixelSense display with touch support and a 120Hz refresh rate. It also supports Adaptive Colour Technology that is designed to adjust colour production on the display as per the ambient environment. The Surface Pro 8 also includes support for Dolby Vision display technology and Dolby Atmos sound.

Microsoft claims that the Surface Pro 8 is more than twice as fast as the Surface Pro 7 — thanks to the 11th-generation Intel Core processors. The 2-in-1 device is also built on the Intel Evo platform that is specifically meant for premium, ultra-slim devices.

For consumers who don't want to spend much on the Surface Pro 8, Microsoft has the Surface Go 3 as an affordable 2-in-1 option. The new Surface Go model is design-wise quite similar to its predecessor. However, Microsoft claims that it is 60 percent faster from the earlier model with up to Intel Core i3 processor. There is also an optional LTE Advanced support for an enhanced connectivity while on-the-go.

The Surface Go 3 comes with a 10.5-inch touch display with a 3:2 aspect ratio and features 1080p cameras on the front and back. It also includes Dolby Audio and studio microphones. Microsoft also claims that the Surface Go 3 is designed to deliver an all-day battery life.

The last major announcement of Microsoft's hardware event this year was the Surface Duo 2. The new dual-screen phone by the Redmond company comes with a list of improvements over the original Surface Duo that was more like a concept in the market. However, there aren't many changes at the design level.

Running on Android 11 out-of-the-box, the Surface Duo 2 features two 5.8-inch PixelSense displays that make a larger 8.3-inch viewing experience when the device is unfolded. There is also a glance bar that lets you check all the notifications when the phone is folded. You can also check battery levels when charging through the glance bar — without requiring to unfold the phone. Under the hood, there is an octa-core Qualcomm Snapdragon 888 SoC, which is a significant upgrade over the Snapdragon 855 powering the first-generation Surface Duo.

The dual-screen form factor of the Surface Duo 2 is designed to run two apps simultaneously. Microsoft also claimed that it has worked with developers and game studios to bring 150 optimised games for the dual-screen setup. These games include Asphalt Legends 9, Modern Combat 5, and Dungeon Hunter 5.

Microsoft will bring the Surface Duo 2 in Glacier and Obsidian colour options.

The new Microsoft Surface Pro X is based on the same Microsoft SQ2 silicon that was powering the model launched previously. However, it brings Wi-Fi only connectivity over integrated LTE to deliver the earlier experience with some affordability. It is claimed to come with an all-day battery life and offer Windows 11 out-of-the-box.

Microsoft Surface Slim Pen 2 is an optional accessory that is designed to take the experience on the Surface Laptop Studio and Surface Pro 8 to new levels. The stylus is powered by a custom-designed Microsoft G6 chip and includes a digital ink that is meant to offer tactile feedback when drawing and writing on the screen. Microsoft claims that it has improved haptics and interaction feedback using the digital ink on the new Surface Slim Pen to give users the feel of pen on paper. The stylus can be stored and charged magnetically.

The second interesting accessory that Microsoft unveiled at the virtual event was the Surface Adaptive Kit that is specifically designed for differently abled people who want to use Surface devices. It includes stickers that can be attached to the keyboard, cable, and even the lid of Surface laptops and tablets for ease in their use — specifically for people with low vision, blindness, and/or limited strength.

Microsoft also brought the Ocean Plastic Mouse as a wireless accessory for computing users. It is claimed to be 20 percent recycled and has plastic that came from oceans and beaches. The device also comes in a plastic-free, recyclable packaging.

The last accessory of the event is the Microsoft Modern USB-C Headset that is certified for Microsoft Teams and is designed with a lightweight build to enable hours-long audio and video calling. It includes dedicated meeting controls and USB Type-C connectivity.