Seagate One Touch With Password (5TB) Review: Differentiation in a Commodity Market 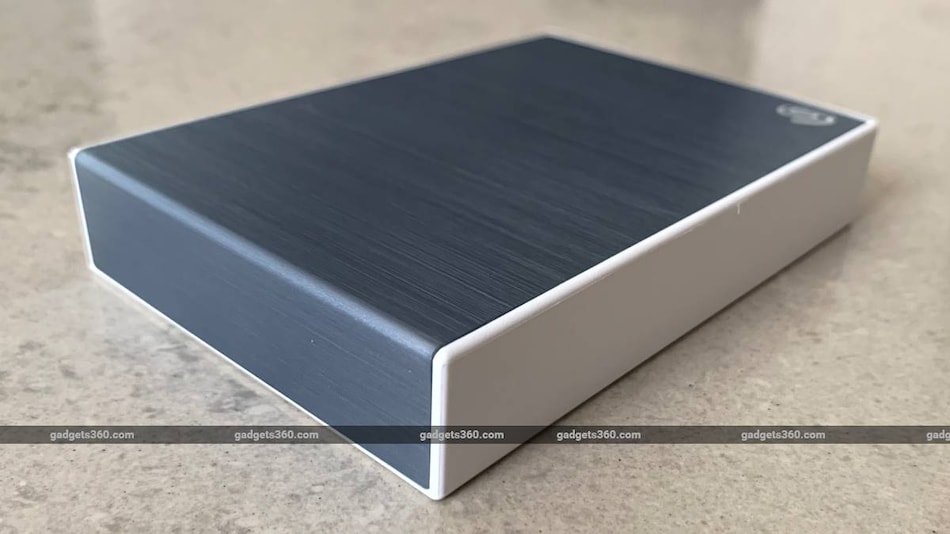 Portable hard drives aren't really exciting anymore – there's very little to differentiate one brand from another and you'll often just buy whichever is priced lower. Still, everyone needs a hard drive for backups – even if you think you don't, you do. Some companies have tried innovating with design, but there's isn't much that anyone can do with a plastic rectangle. We've also seen bundled backup and security software as a value-add, which might help swing buyers' decisions. Seagate has tried both these avenues with its new One Touch With Password product line.

Seagate offers its Expansion portable storage series which just covers the basics – you plug them in, and drag and drop files. On the high end, the Ultra Touch models are slim, with stylish fabric on the exterior, and value-added software features. The One Touch series sits in the middle, with high-capacity options and more utilitarian features. Do these factors matter when choosing a portable hard drive? We're about to find out.

Rather than being bland commodity items, the new Seagate One Touch With Password hard drives are available in six colour options – black, silver, and space grey which have black trims, as well as red, pink, and light blue which have white trims. The body is made of plastic, with a brushed metal panel in your choice of colour that wraps around the top and front.

This gives you plenty of choice, in terms of looks – black on black is of course the most sober, and red on white is probably the most distinctive. The light blue unit that I received for review is quite attractive. It's more of a metallic grey-blue than the pastel tone I was expecting based on photos on Seagate's website and product listings, and the brushed metal finish gives it a denim-like look, which is nicely offset by the white frame.

That said, the plastic fabrication wasn't perfect – I felt a few rough edges, and there's a tiny bit of a gap where the metal meets the plastic. It won't be noticeable from a distance, but this is the kind of product you pick up and hold in your hand a lot. I also would have liked more rounded corners.

You have a choice of capacities as well: 1TB, 2TB, 4TB, and 5TB. The former two are 11.7mm thick and weigh 148g while the latter two, with more physical platters, are 20.9mm thick and weigh 268g. There's a tiny white activity LED in one corner of the top and a USB 3.0 Micro-B connector on the back. It's high time that USB Type-C became universal, but for some reason most manufacturers are sticking with this less convenient standard for hard drives.

In the box is a single USB 3.0 cable – not even a second Type-C cable or adapter – plus some leaflets. There's a quick start guide which really only tells you to run the Seagate software that comes on the drive itself; a separate sheet with printed codes to let you set up and override your password if you forget it; and also some instructions for redeeming the free bundled software offers. Buyers get a one-year subscription to Mylio Create, a photo organisation tool, plus access to Adobe's Creative Cloud Photography Plan which includes only Photoshop and Lightroom, for four months.

The One Touch With Password drive gets its name thanks to AES-256 hardware encryption. To set this up, you'll need to run the Seagate Toolkit software which you will be directed to download if you run the launcher app that's loaded onto the hard drive. To set up a password, you'll need to first enter the 8-character Secure ID on the leaflet in the box. Seagate's documentation says this code should also be printed on a sticker on the drive, but I didn't see this on my review unit, so the leaflet needs to be kept safely. You can then create a reset key that's linked to a Seagate/LaCie account, if you have one. If not, you'll need the 32-character reset code on the leaflet.

Once you set up a password, you'll need to enter it into the Toolkit prompt whenever you plug this drive in to your PC. If you're using it on another computer, a small partition will be visible, and you'll have to run the unlock utility that's loaded onto it before you can access the drive's contents.

Seagate Toolkit also allows you to automate backup routines and mirror folders of your choice so that files are synced two ways. Some people might not immediately know whether to select Backup or Mirror when they want to protect their files, and the two concepts are similar but have different implications. A bit more explanation of when to use either option would have been helpful. However, the steps are easy to follow in either case.

On top of all of this, the most interesting feature is that Seagate offers buyers one free attempt at data recovery using the Seagate Rescue service, at its lab. This might give buyers peace of mind, since the prospect of losing up to 5TB of precious data due to physical drive failure can strike fear into any computer user's heart. According to Seagate's India warranty claim information, the company will send you a prepaid shipping label for you to send your drive in to the lab free of cost, and the attempt can take 15 business days. Seagate claims a 95 percent success rate but there's no guarantee that data on your specific drive will be retrievable.

Unsurprisingly, Seagate doesn't even advertise read and write speeds for this hard drive – if you want fast file transfers, go for an SSD. Portable hard drives can't even saturate a USB 3.0 connection, so brands don't compete on speed anymore. You get a three-year warranty and three years to use your Seagate Rescue data recovery attempt. Other than the storage capacity and 256-bit AES encryption, there are no specs to report. My 5TB unit came pre-formatted in the ExFAT file system which is interoperable between Windows and macOS (though you'll need to format or partition it if you're using Time Machine for backups on a Mac). The total addressable capacity is 4.657TB.

CrystalDiskMark reported sequential reads and writes of 144.6MBps and 136.4MBps respectively. Random reads were of course lower. The Anvil benchmark reported read and write scores of 167.11 and 149.71 for a total of 316.82. These scores are largely in the same ballpark as those of the WD My Passport (2019).

5TB is a huge amount of space and you can't get this sort of capacity with SSDs yet – even if you did, they'd be exorbitantly expensive. If you need to back up or carry large amounts of data, you do need a hard drive. Of course for the safest backups, you need multiple drives that are stored in different locations. It's clear that we haven't seen the end of this category yet, but hard drives are a commodity purchase now.

Seagate has established product tiers, with its hard drives falling into basic, feature-rich, and stylish categories. However if you look at retail markets and e-commerce websites, prices seem to fluctuate and few of these drives actually sell at their official MRPs. You can sometimes find premium models selling for less than basic ones – and that applies to main rival WD as well – so pick whatever works best for you.

The Seagate One Touch With Password does come with useful software, but it's the data recovery service that really makes this an interesting prospect and gives Seagate an edge. While this is impossible to test first-hand, and each case of drive failure will be different, it should give buyers some peace of mind. Plus, there's at least one colour combination that everyone should like.