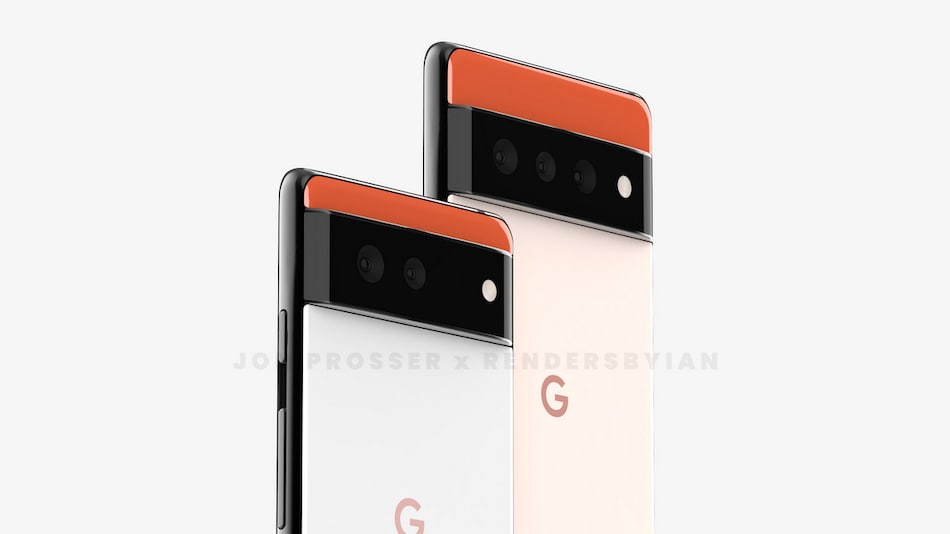 Google Pixel 6, Pixel 6 Pro are said to come with the same back panel design

Google Pixel 6 and Pixel 6 Pro (not official names) leaked renders show a significant shift in the design language for the upcoming series compared to the older generations. The smartphones are seen with a horizontal camera module at the back that runs across the entire width of the phones. These images have been shared by a reliable tipster who has been fairly accurate with Apple and Google leaks in the past. The Google Pixel 6 and Pixel 6 Pro renders are accompanied by renders of a smartwatch that is claimed to be the Pixel Watch.

Pixel phones in the past, starting with the Pixel and Pixel XL, have had a pretty simple. Over the years, there have been some iterative changes, especially on the back. The Pixel and Pixel 2 had a thick forehead bezel while the Pixel 3 came with a large notch. The Pixel 4 went back to the thick forehead bezel, albeit slimmer than before, and the Pixel 5 got a hole-punch cutout display design. The back panel of the Pixel phone have been flat and very similar up until the Pixel 4. But this time around, Google is doing something strikingly different.

Tipster Jon Prosser has shared 3D renders of the alleged Pixel 6 and Pixel 6 Pro on the Front Page Tech YouTube channel. The two phones have the same back design with the only difference being the number of cameras. The render or the Pixel 6 shows a raised, slim horizontal bar that stretches across the width of the phone and houses two camera sensors, as well as the flash. Above this camera bar is an orange panel and below it is a white panel with the Google logo. The power and volume buttons can be seen on the right side. On the front, a centrally located hole-punch cutout can be seen along with slim bezels.

Prosser claims that he actually got real-life hands on images of the phone which he sent to concept artist Ian Zelbo (@RendersbyIan) who created these 3D renders.

The Pixel 6 Pro renders show a third camera sensor in the horizontal camera bar with the same design for the rest of the back as the Pixel 6. Details of the camera sensors are unclear at the moment. One of the renders also shows an in-display fingerprint sensor which will likely be on both phones. The Pixel 6 Pro seems to have a pinkish, faded orange panel below the camera bar. Another render of the Pixel 6 Pro was shown in the video with a champagne-like colour.

Additionally, one of the renders show a smartwatch alongside the alleged Pixel 6, While Prosser did not mention anything about it, another tipster Max Weinbach claimed on Twitter that this is actually the Pixel Watch. Weinbach also said that he can independently confirm the Pixel 6 renders are accurate but the colours are not.

Google has not shared any information on the Pixel 6 series of phones as yet, but a report from early April suggested that the search giant may be using its in-house SoC called the ‘GS101' Whitechapel SoC to power the next generation of Pixel phones. There is no information on when the rumoured Pixel 6 series will be unveiled.