The two phones are shown sporting a wide notch with facial recognition sensors. 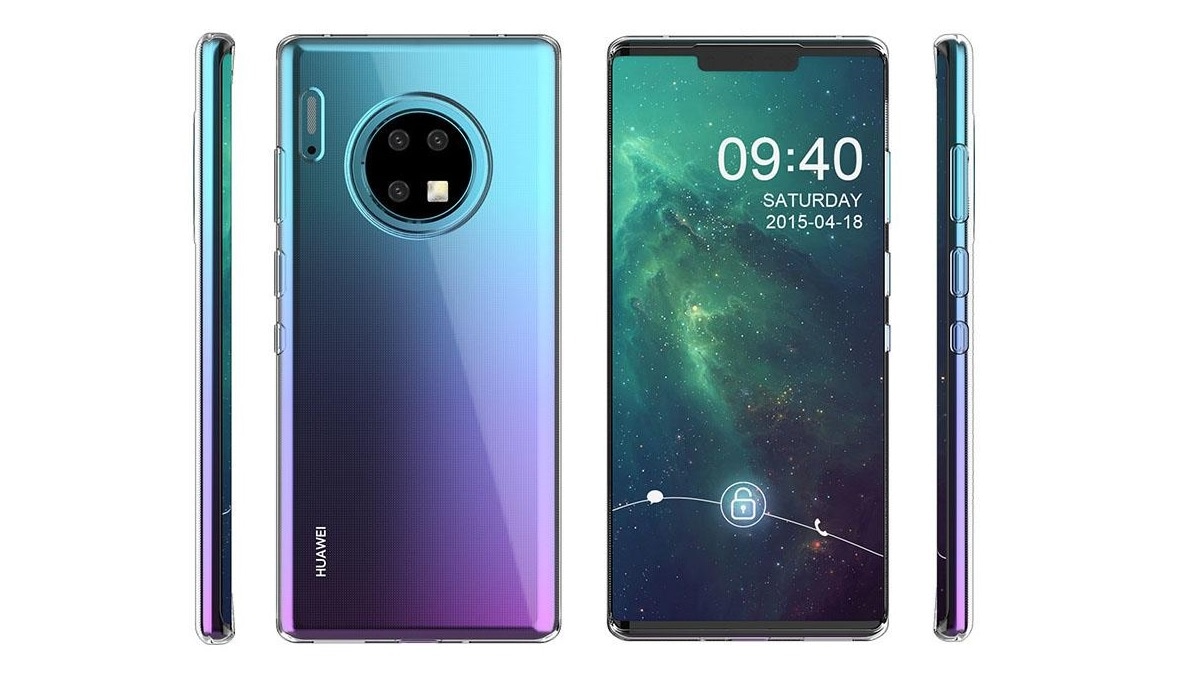 Huawei Mate 30 Pro is expected to debut this fall, and if leaks are anything to go by, the phone will reportedly pack upgraded camera hardware and an eye-catching design with a dramatically curved display. While multiple concept renders have surfaced in the past few weeks, new case-based renders of the Huawei Mate 30 Pro has popped up, revealing a gradient design on the phone's rear panel and a circular camera module on the back. On the front, the phone can be seen sporting a wide notch with cutouts for multiple sensors that will reportedly be used for 3D facial recognition.

The Huawei Mate 30 Pro case renders, which come courtesy of Slashleaks, show a design that is drastically different from a previous render that surfaced last month. Moreover, the freshly leaked renders show a circular camera module with three lenses, while the older leak depicted four cameras, aside from the fact that the positioning of flash and surface finish on the rear panel are also different.

The new case renders show a gradient finish on the Huawei Mate 30 Pro, while the top and bottom edges are flattened with a matching colour scheme for a uniform look. But unlike the dramatically curved display that we've been expecting to see on the phone, something that leaked screen protectors have indicated, the Huawei Mate 30 Pro is shown packing a tall display with a wide notch and sloping edges with a subtle curve.

Huawei Mate 30 is also shown packing triple rear cameras, but there is no word on the megapixel count
Photo Credit: SlashLeaks

On the front is a wide notch, which looks identical to the one we've already seen in another set of leaked images depicting screen protectors and live images of the phone's test unit itself. Another notable element is the metallic grill for the speaker on the rear panel's top left corner and what appears to be a laser autofocus module below it.

Slashleaks has also leaked case renders of the standard Huawei Mate 30, which appears to have a curvier rear panel but the same circular camera module with three snappers. The only difference is that the Huawei Mate 30 Pro has a square LED flash, while the one on the Huawei Mate 30 is circular.

As per a previous leak, the Huawei Mate 30 Pro will feature two 40-megapixel sensors (primary 40-megapixel camera with a variable aperture of f/1.6 – f/1.4 and 1/1.5-inch sensor + secondary 40-megapixel camera with 1/1.8-inch sensor and a 120-degree ultra-wide field of view), assisted by an 8-megapixel telephoto lens. Trial production of the Huawei Mate 30 Pro has reportedly begun, but owing to inconsistencies with past leaks, we suggest you process the freshly leaked case renders with a fair bit of scepticism.