Despite the decline, Chinese brands dominated with over 74 percent share in Q1 2022. 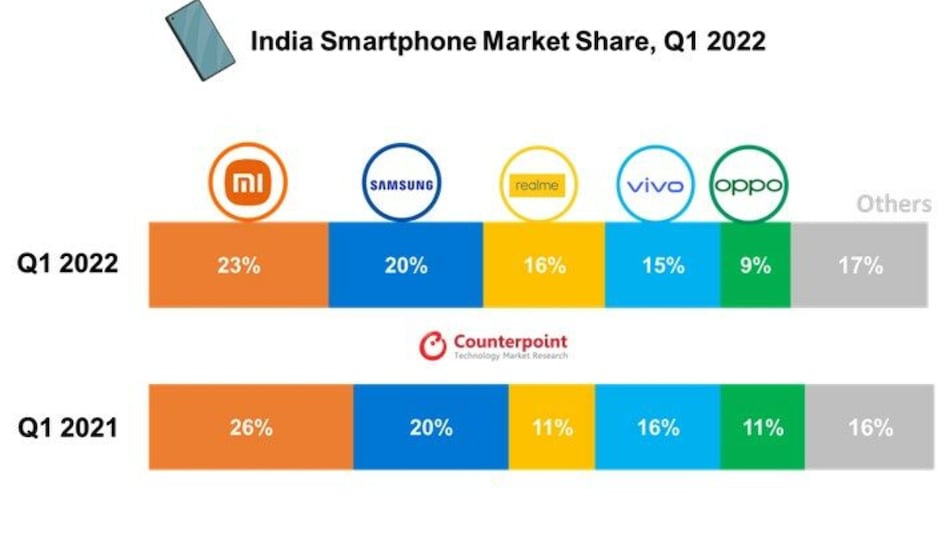 India's smartphone shipments are down by 1 percent year-on-year (YoY) in the January-March quarter of FY22. Owing to the shortage of components and a sharp decline in demand, smartphone shipments hit 38 million units in Q1 2022. The data has been revealed in the latest research from Counterpoint's Market Monitor service, which reflects the effects of COVID-19 on the smartphone market in India. The third wave of the pandemic, which hit the country in January this year, resulted in a slow start to the quarter, which gained some speed in the last few weeks of March quarter.

As per a report by Counterpoint Research, despite the decline, Chinese brands dominated with over 74 percent market share in Q1 2022. Just like the first quarter of last year, Xiaomi remained at the top position in India's smartphone market with 23 percent share. However, its YoY market share came down by 13 percent year-on-year. Counterpoint's shipments figures for Xiaomi include the Poco brand. The Chinese smartphone maker managed to lead the market even in the presence of intense competition, component shortages and inflation. The brand has also won the second spot in 5G shipments for the first time in the Indian market.

Xiaomi was followed by South Korean smartphone brand Samsung, which has driven the consumer demand with the introduction of the Galaxy A series. Interestingly, the company retained the top position as the top-selling 5G smartphone brand in India for the second consecutive quarter. With a 1 percent YoY decline in Q1 2022, Samsung held 20 percent market share in smartphone shipment.

Next in the list is Realme, the only brand among the top five to see a YoY growth of 40 percent in Q1 2022. Realme's market share stands at 16 percent, up from 11 percent share last year in Q1. The shipments for Realme models saw a quick pick after the festive season. Other factors that worked in Realme's favour are use of Unisoc chipsets, targeted product portfolio, and aggressive channel strategy.

Vivo and Oppo captured fourth and fifth position, respectively. While Vivo faced an 8 percent YoY decline, Oppo's shipments declined 18 percent YoY in Q1 2022. However, Vivo's market share for smartphone shipment stands at 15 percent, while Oppo captured a 9 percent share. Counterpoint's figures for Oppo do not include the OnePlus brand.

Apple registered 5 percent YoY growth in Q1 2022, being the top-selling brand in the premium segment, the report.

Out of the total smartphone shipment share, 5G handsets contributed more than 28 percent, along with 314 percent YoY growth. The share is expected to cross 40 percent in coming quarters.