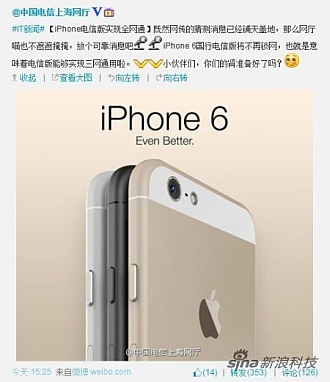 Major carrier China Telecom has gone ahead and announced the iPhone 6 ahead of Apple, confirming the device's imminent launch with a post on its via its Weibo account last week. Revealed days ahead of the anticipated September 9 event, the firm posted a promotional image of the smartphone, showing its Gold, Silver and Black colour variants.

China Telecom's Weibo post, which now has been pulled down, was spotted by Sina news (via Forbes), which stated that the Apple iPhone 6 handset will be available as an unlocked device for LTE, WCDMA, CDMA2000, GSM, and CDMA1X networks. Notably, China Telecom did not sell unlocked versions of the iPhone until now. Nothing more was mentioned in the post.

While the information is not so thrilling, the Weibo does however confirm the existence of the iPhone 6 device, similar to how Verizon leaked the HTC One (M8) on multiple occasions.

The iPhone 6 is expected to arrive in two display size variants, with 4.7-inch and 5.5-inch models (said to be called the iPhone 6L or iPhone Air) anticipated. A report from last week mentioned that the Cupertino firm is facing production issues for the iPhone 6 devices' screen panels. Two supply chain sources were reported saying the display panel production had suffered a setback after the backlight that helps illuminate the screen had to be revised, putting screen assembly on hold for parts of June and July.

Additionally, last week's leaked schematics tipped the upcoming iPhone 6 to feature a new 128GB inbuilt storage variant. Reports indicated that Hynix and Toshiba would supply the 16GB storage, while Hynix, Toshiba, and SanDisk will offer the 64GB. Lastly, the schematics show that Toshiba will supply the new 128GB storage only.

We remind readers the above mentioned features are a part of the leaks and rumours, and must be taken with a pinch of salt till confirmation by Apple.