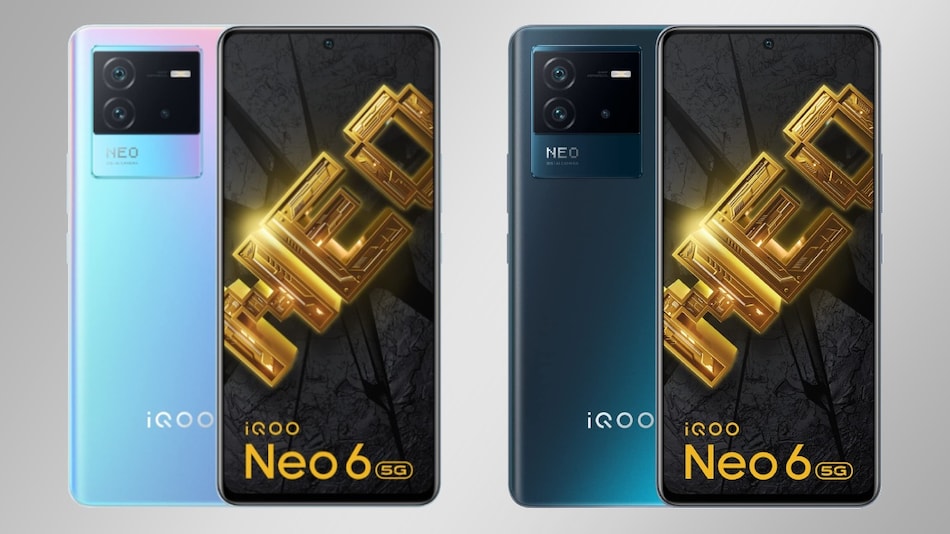 iQoo Neo 6 was launched in India on Tuesday. The company's latest addition to its Neo smartphone portfolio is equipped with a Snapdragon 870 SoC, paired with up to 12GB of RAM. The handset made its debut in China in April, with the more powerful Snapdragon 8 Gen 1 SoC under the hood. It sports a 6.62-inch E4 AMOLED display with a 120Hz refresh rate, and is equipped with a 64-megapixel triple rear camera setup. The iQoo Neo 6 packs a 4,700mAh battery with 80W FlashCharge support.

Alongside the iQoo Neo 6, the company also announced two new gaming focussed accessories during the launch event. The iQoo Cooling Back Clip is claimed to reduce 15 degrees in less than a minute, and is priced at Rs. 2,499, while the iQoo Game Finger Sleeves with 35 percent high-density silver conductive fiber is priced at Rs. 249, according to the company.

The dual-SIM (Nano) iQoo Neo 6 runs on Android 12-based Funtouch OS 12 out of the box. It sports a 6.62-inch full-HD+ (1,080x2,400 pixels) E4 AMOLED display with a 360Hz touch sampling rate. The handset is powered by a Snapdragon 870 SoC, paired with up to 12GB of RAM.It is equipped with a liquid cooling vapour chamber for improved thermal management while gaming. As previously mentioned, the Chinese variant of the smartphone is equipped with the Snapdragon 8 Gen 1 SoC.

The iQoo Neo 6 comes with up to 256GB of UFS 3.1 inbuilt storage. Connectivity options on the handset include 5G, 4G LTE, Wi-Fi, Bluetooth 5.2, GPS, and a USB Type-C port. Sensors on board include an accelerometer, ambient light sensor, magnetometer, gyroscope, proximity sensor, along with an in-display fingerprint sensor for biometric authentication. The iQoo Neo 6 packs a 4,700mAh battery with 80W FlashCharge support. It measures 163x76.16x8.54mm and measures 190 grams.