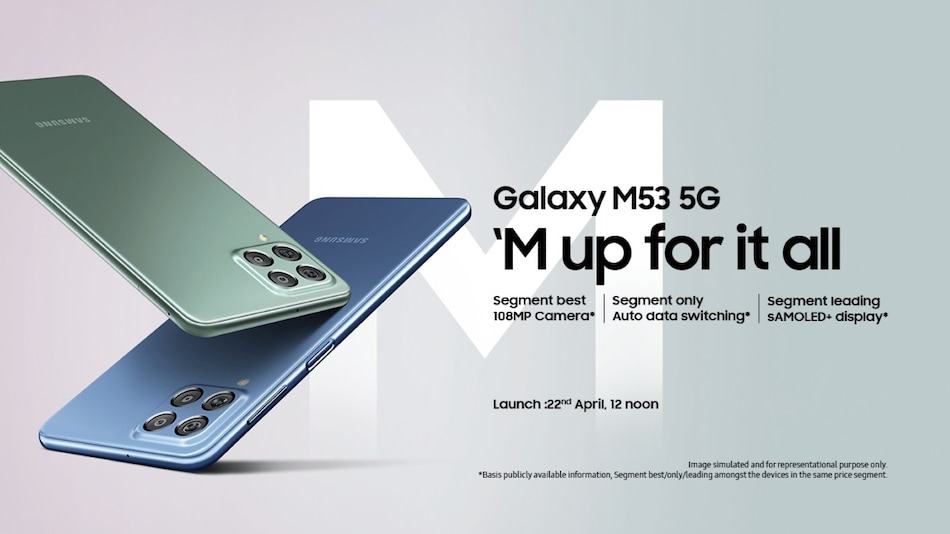 Samsung Galaxy M53 5G India launch date is set for April 22, the company has revealed through a teaser. The new 5G Samsung phone debuted globally earlier this month. It features a 108-megapixel primary rear camera as well as a 120Hz Super AMOLED+ display. The Samsung Galaxy M53 5G has a hole-punch display design and supports 25W fast charging. This phone is the successor to the Galaxy M52 5G, which debuted in India last year, with features including triple rear cameras and a 120Hz display.

Samsung has revealed the India launch date of the Galaxy M53 5G through a microsite. Amazon has also separately created a dedicated webpage to promote the launch of the Samsung Galaxy M53 5G in India. The official material available on both Samsung India's website and Amazon shows that the launch will take place at 12pm (noon) on April 22.

Samsung earlier this month revealed that the Galaxy M53 5G will come in a 6GB + 128GB configuration, and there will likely be other variants as well.

The Samsung Galaxy M53 5G is likely to run Android 12 with One UI 4.1 on top. It features a 6.7-inch full-HD+ (1,080x2,400 pixels) Infinity-O Super AMOLED+ display with a 120Hz peak refresh rate. The phone is powered by an octa-core SoC that is yet to be specified. The Samsung Galaxy M53 5G has a quad rear camera setup including a 108-megapixel primary sensor, along with an 8-megapixel ultra-wide shooter, 2-megapixel depth sensor, and a 2-megapixel macro shooter.

For selfies and video chats, the Samsung Galaxy M53 5G has a 32-megapixel selfie camera at the front.

The Samsung Galaxy M53 5G will support storage expansion using a microSD card (up to 1TB).