Motorola’s latest phone will debut with a 6.5-inch HD+ display. 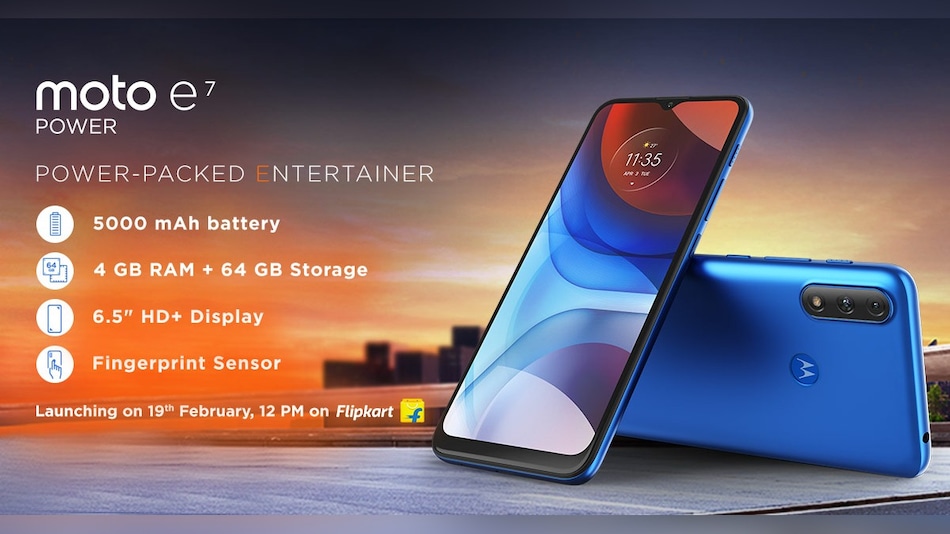 Moto E7 Power will sport a fingerprint reader for security

Moto E7 Power is set to launch in India on February 19. The smartphone has been subject to several leaks in the past and a recent Geekbench listing suggests the inclusion of the MediaTek Helio P22 SoC under the hood. Now, Moto E7 Power is confirmed to pack a 5,000mAh battery and a dual rear camera setup. In the Moto E-series, it follows the Moto E7 Plus that was launched globally in September last year. Going by the specifications revealed by the Lenovo-owned company, Moto E7 Power is expected to be a budget smartphone.

Although Motorola hasn't announced the pricing details of the upcoming Moto E7 Power, the smartphone is confirmed to be available via Flipkart starting February 19 at 12pm (noon). It will come in a single 4GB + 64GB storage configuration.

Welcome the #PowerpackedEntertainer #motoe7power that will take you on an entertaining ride with a long-lasting powerful 5000 mAh battery, efficient 4 GB RAM, 64 GB Storage, immersive 6.5" HD+ display, and more! Launching on 19th Feb, 12 PM on @Flipkart. pic.twitter.com/sZQPxVGJUh

Moto E7 Power will sport a 6.5-inch HD+ (720x1,600 pixels) display. The company also confirmed via a tweet that it will feature up to 4GB of RAM and 64GB of onboard storage, along with a 5,000mAh battery. It will also feature a rear-mounted fingerprint scanner for security.

Under the hood, Moto E7 Power may be powered by MediaTek Helio P22, as per a recent Geekbench listing. The phone scored 153 points in single-core test and 865 in multi-core. The Geekbench listing also shows that the smartphone will run on Android 10.

For photography, Moto E7 Power has been tipped to sport a dual rear camera setup that comprises a 13-megapixel primary snapper and a 2-megapixel secondary sensor. For selfies and video chats, the smartphone may come with a 5-megapixel sensor at the front. The dual camera setup is visible on the latest tweet from Motorola India. However, the company is yet to confirm the sensor details.