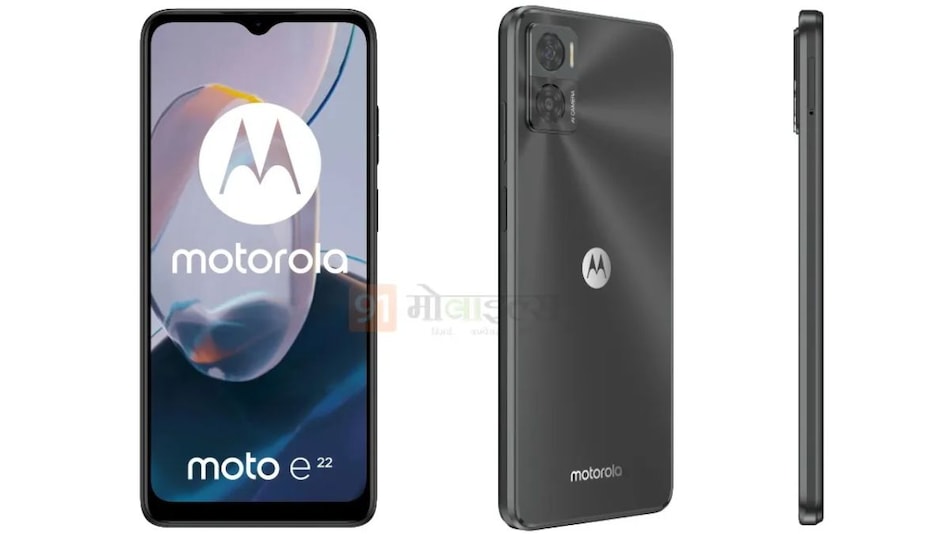 Motorola Moto E22 alleged renders have been leaked online, as per a report. The purported renders suggest that the phone could feature a waterdrop-style notch on the display, which is expected to house the selfie camera. At the rear, the handset can be seen with a dual AI camera setup with an LED flash. The Moto E22 could feature volume rockers and a power button on the right spine, according to the images. The handset could also feature Dolby Atmos support.

Tipster Sudhanshu Ambhore, in collaboration with 91Mobiles Hindi, has shared the purported renders of the rumoured Moto E22 from Motorola. The handset appears with a dual rear AI camera setup with an LED flash. As per the images, the Motorola logo has been placed in the centre of the rear panel with the Motorola branding at the bottom.

At the front, the purported Moto E22 is shown to feature a waterdrop-style notch with a thick chin, as per the shared images. On the right spine, the phone could sport the volume rockers and a power button. The images also suggest that the handset could be equipped with a SIM tray on the left spine. On the top, it can be seen with a 3.5mm audio jack, next to Dolby Atmos branding. The phone could feature Dolby Atmos support. The company is yet to reveal the specifications of the Moto E22.

In August, Motorola launched the Moto E22s in Europe. The smartphone sports a 6.5-inch IPS LCD display with HD+ resolution. It is powered by a MediaTek Helio G37 SoC, coupled with 4GB of RAM and 64GB of interval storage.

The storage of the Moto E22s can be extended up to 1TB via a microSD card. For optics, it sports a dual rear camera setup with a 16-megapixel primary sensor and a 2-megapixel depth sensor. At the front, it sports an 8-megapixel selfie camera. The phone features a side-mounted fingerprint scanner and face unlock for security. It packs a 5,000mAh battery with 10W charging support.