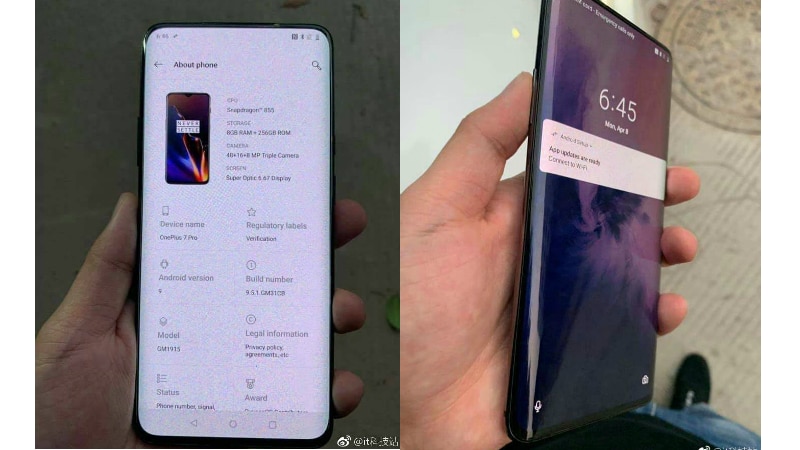 OnePlus 7 Pro is seen to sport a dual-edged display

Starting with the Weibo leak, the OnePlus 7 Pro image leak shows that the phone will sport a dual edged display, similar to the Galaxy S10+. The phone is seen to sport a notch-less and hole-less display indicating a pop-up selfie camera setup. The back of the phone is not shown by the tipster. A second image reveals specifications of the OnePlus 7 Pro, and the ‘About Phone' section reveals that the phone will sport a 6.67-inch Super Optic display, a Snapdragon 855 processor paired with 8GB RAM, 256GB of internal storage, and a triple rear camera setup – with one 48-megapixel sensor, another 16-megapixel sensor, and a last 8-megapixel sensor. The OnePlus 7 Pro is listed to run on Android Pie.

It's worth noting that the OnePlus 7 Pro in the Weibo leak also came with the model number GM1915. Lastly, the same model was also approved on Bluetooth SIG certification site as well, lending more weight to the arrival of this variant. .

This is probably the first time OnePlus is releasing multiple variants of its flagship. Earlier, OnePlus used to only launch multiple RAM + Storage variants, but never a different variant altogether.

Black Holes May Finally Be Ready for Their Close-Up
Game of Thrones Recap: Who’s Dead and Who’s Alive — and Season 8 Predictions