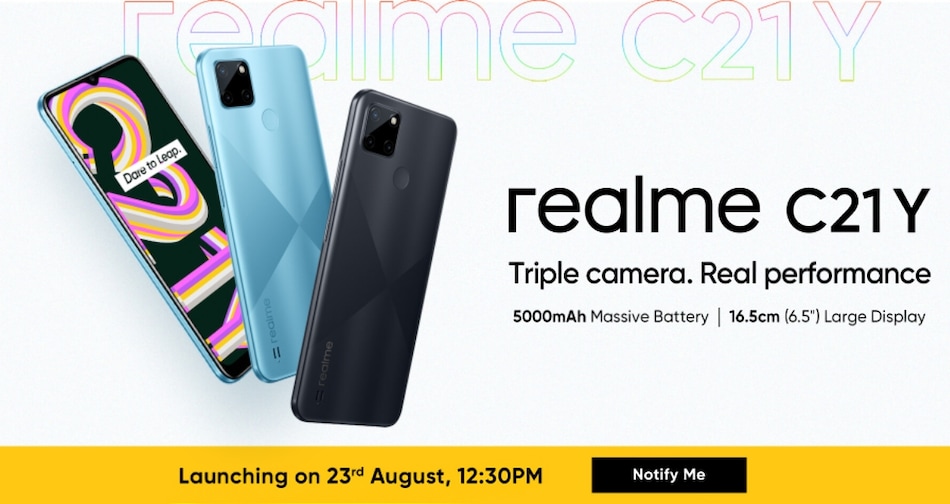 Realme C21Y is powered by the Unisoc T610 SoC

Realme C21Y is all set to launch in the Indian market, the company has confirmed. The launch date has been set for August 23 and the unveiling will take place on Realme.com. To recall, Realme C21Y was unveiled in Vietnam last month. It features a triple camera setup on the back with a 13-megapixel main camera and also has a 5-megapixel selfie camera. Realme C21Y is powered by the Unisoc T610 SoC. The smartphone packs a 5,000mAh battery. There is a fingerprint scanner on the back.

The company announced via a press release that Realme C21Y will launch in India on August 23. A dedicated microsite has gone live on Realme.com that teases the phone and has a 'Notify Me' for registrations. The teaser page confirms that the phone will come in Cross Blue and Cross Black colour options. It is likely to be priced in the same range as the Vietnam model. Realme C21Y is priced in Vietnam at VND 3,240,000 (roughly Rs. 10,500) for the 3GB + 32GB storage model and VND 3,710,000 (roughly Rs. 12,000) for the 4GB + 64GB model.

Realme C21Y runs on Android 10-based Realme UI. It features a 6.5-inch HD+ (720x1,600 pixels) display. The phone is powered by an octa-core Unisoc T610 SoC, paired with a Mali-G52 GPU. There is up to 4GB RAM and up to 64GB storage options. Storage is expandable via a dedicated microSD card slot.

The Realme phone packs a triple rear camera setup that includes a 13-megapixel primary sensor, a 2-megapixel black and white sensor, and a 2-megapixel macro shooter. At the front, there is a 5-megapixel selfie shooter.

There is a 5,000mAh battery on Realme C21Y that supports reverse wired charging. For connectivity, Realme C21Y comes with LTE, Wi-Fi, Bluetooth v5, GPS, a 3.5mm headphone jack, and a Micro-USB port for charging. There is a fingerprint scanner on the back as well.