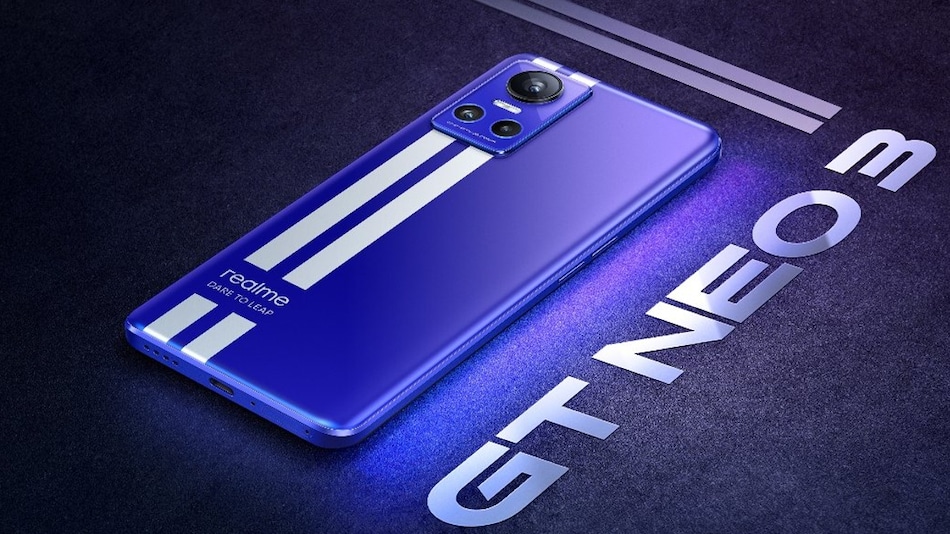 Realme GT Neo 3 is reportedly being readied for launch in India. The launch date is yet to be officially confirmed by the Chinese smartphone company, but as per a fresh leak, the new gaming-focused phone will make its Indian debut next month. The leak also suggests Realme GT Neo 3's colour options as well as RAM and storage details. The handset was launched in China recently. Realme GT Neo 3 is powered by the MediaTek Dimensity 8100 5G SoC and features triple rear cameras headlined by a 50-megapixel Sony IMX766 primary sensor. It offers up to 12GB of RAM and a maximum of 256GB of storage.

Tipster Mukul Sharma, in collaboration with Onsitego, has leaked the Indian launch timeline, colour variants and RAM + storage configurations of Realme GT Neo 3. As per the leak, the Indian variant of Realme GT Neo 3 will come in three colour options — Asphalt Black, Nitro Blue, and Sprint White. The handset is said to come in three configurations — 8GB RAM + 128GB storage, 8GB RAM + 256GB storage and 12GB RAM + 256GB storage. It is expected to be announced in April. The information is in line with past leaks. However, there is no official word from Realme on it.

To recall, Realme GT Neo 3 was unveiled last week with an initial price tag of CNY 1,999 (roughly Rs. 24,000) for the base 6GB RAM + 128GB storage variant. It is offered in Cyclonus Black, Silverstone and Le Mans (translated) colour options.

The Indian variant of Realme GT Neo 3 is likely to have mostly the same specifications as the Chinese variant. The dual-SIM (Nano) Realme GT Neo 3 runs on Android 12 with Realme UI 3.0 on top. It features a 6.7-inch 2K display with a refresh rate of 120Hz and a touch sampling rate of 1,000Hz. It comes with HDR10+ and DC dimming support as well. Realme GT Neo 3 is powered by the MediaTek Dimensity 8100 5G SoC, paired with up to 12GB LPDDR5 RAM and up to 256GB of UFS 3.1 storage.

For photos and videos, Realme GT Neo 3 features a triple rear camera unit along with LED flash. The camera setup includes a 50-megapixel Sony IMX766 primary sensor with support for optical image stabilisation (OIS) and electronic image stabilisation (EIS), an 8-megapixel ultra-wide-angle lens with a 119-degree field of view, and a 2-megapixel macro shooter. For selfies, the phone has a 16-megapixel sensor on the front. The Chinese variant of Realme GT Neo 3 offers up to 256GB of UFS 3.1 storage.