Realme will hold a virtual launch event at 12:30pm today that will be livestreamed. 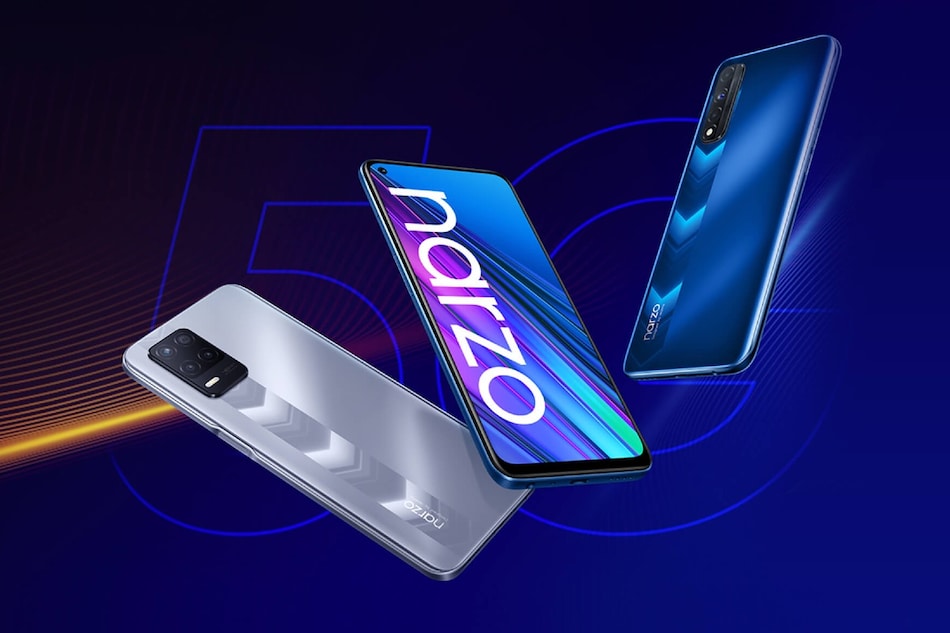 Realme Narzo 30, Realme Narzo 30 5G, Realme Smart TV full-HD 32-inch, and Realme Buds Q2 are set to launch in India today (June 24). The two new Realme Narzo phones debuted outside India last month. In the series, Realme Narzo 30 is teased to come with a MediaTek Helio G95 SoC, whereas Realme Narzo 30 5G will arrive with a MediaTek Dimensity 700 SoC. Apart from the smartphones, the Chinese company will also be launching the Realme Smart TV full-HD 32-inch that is teased to have thin bezels and Dolby Audio support. Realme Buds Q2 are also launching alongside, with an advanced active noise cancellation (ANC) feature. Read on to check out the launch timings, livestream details, expected price, and specifications of the upcoming Realme devices.

The virtual launch of Realme Narzo 30, Realme Narzo 30 5G, Realme Smart TV full-HD 32-inch, and Realme Buds Q2 will take place at 12:30pm today. The event will be livestreamed through the Realme India YouTube channel. You can also watch it below:

The dual-SIM (Nano) Realme Narzo 30 runs on Android 11 with Realme UI 2.0 on top. It features a 6.5-inch full-HD+ (1,080x2,400 pixels) display with a 20:9 aspect ratio. Under the hood, the phone has the octa-core MediaTek Helio G95 SoC, along with 6GB of RAM. The phone has a triple rear camera setup that houses a 48-megapixel primary sensor with an f/1.8 lens, a 2-megapixel monochrome sensor, and a 2-megapixel macro shooter. It also has a 16-megapixel Sony IMX471 selfie camera at the front.

Realme has provided 128GB of onboard storage that is expandable via microSD card through a dedicated slot. The phone comes with 4G LTE, Wi-Fi 802.11ac, Bluetooth v5, GPS/ A-GPS, NFC, USB Type-C, and a 3.5mm headphone jack. It also includes a side-mounted fingerprint sensor. Besides, the Realme handset has a 5,000mAh battery with 30W Dart Charge fast charging support.

The dual-SIM (Nano) Realme Narzo 30 5G comes with Realme UI 2.0 based on Android 11. It features a 6.5-inch full-HD+ (1,080x2,400 pixels) display with 90Hz refresh rate. It is powered by the octa-core MediaTek Dimensity 700 SoC, paired with 4GB RAM and 128GB of storage. The phone comes with a triple rear camera setup that has a 48-megapixel primary sensor, along with a 2-megapixel monochrome sensor and a 2-megapixel tertiary sensor. Further, there is a 16-megapixel selfie camera as well.

Notably, the Indian variant of Realme Narzo 30 5G may have some disparity over the European model due to its similarities with the existing Realme 8 5G.

Realme Buds Q2 come with 10mm dynamic drivers and polymer composite diaphragm. The true wireless stereo (TWS) earbuds also include a Game Mode that reduces latency to 88ms. Realme has additionally provided ANC technology that is touted to reduce external noise by up to 25dB. Furthermore, the earbuds are capable of delivering up to 28 hours of playback with the bundled charging case.

As per the details available on the Realme site, the Realme Smart TV full-HD 32-inch will come with a 1,920x1,080 pixels display panel that produces 85 percent of NTSC colour gamut and is powered by a Chroma Boost Picture engine. The TV will also be capable of delivering up to 400 nits of peak brightness. Further, it will come with 24W quad stereo speakers along with Dolby Audio support. The TV will run on Android TV 9 Pie with features including Chromecast support and Google Assistant.