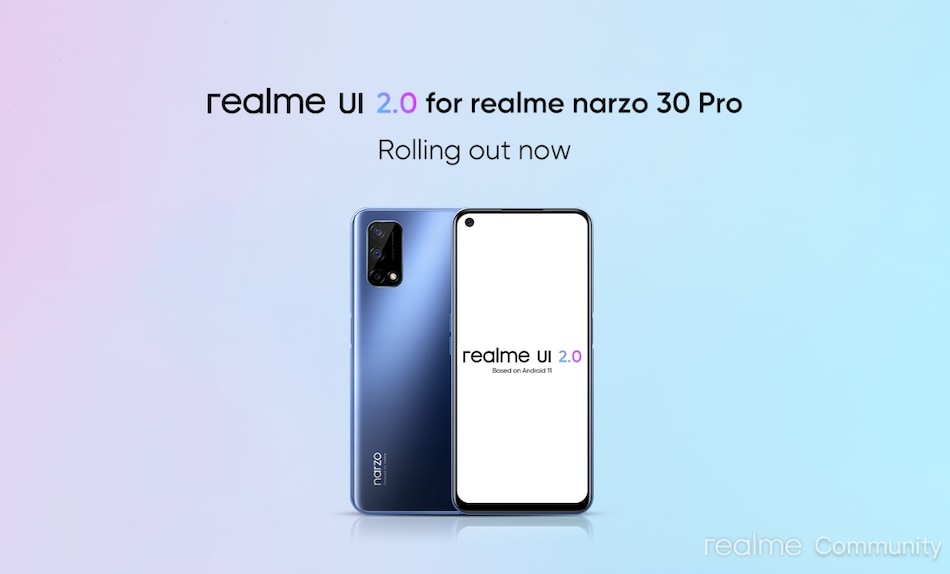 Realme Narzo 30 Pro 5G is getting its stable version of the Android 11-based Realme UI 2.0 update in India. The update brings many new features, bug fixes, and improvements to the 5G-enabled smartphone. These are categorised under Personalisations, System, Security and Privacy, Games, Communication, Camera and more. The smartphone was launched with Android 10 out-of-the-box. Realme Narzo 30 Pro 5G, along with Realme Narzo 30A and Realme 5 Pro received early access to the Android 11-based Realme UI 2.0 back in late June.

The update for the Realme Narzo 30 Pro 5G (Review) was announced through a post on the Realme Community Forum. Detailing the update, Realme announced a host of features, bug fixes, and improvements that are bundled with the Android 11-based Realme UI 2.0 update for the smartphone. As mentioned, the 5G smartphone was launched with Android 10 out-of-the-box.

One of the new features that the smartphone gets is categorised under Personalisations and lets the user create their own wallpaper by picking colours from the photos in the gallery. Other new personalisation features include third-party app icons support, new Dark Mode styles that include Enhanced, Medium, and Gentle.

Users can now drag text, images, or files from a floating window or from one app to the other in the split-screen mode. Additionally, the Smart Sidebar editing page has also been optimised. Realme Narzo 30 Pro 5G users can now remove a folder or combine two. The launcher also receives filters — name, install time, usage frequency — for Drawer Mode.

Realme has also added 'Tone tunes' to the Narzo 30 Pro 5G. Furthermore, users can now determine the duration of the Do Not Disturb mode. It also gets new weather animations, optimised vibrations for text input and gameplay, and optimised auto-brightness. Users will also be able to turn on or off App lock directly from the Quick toggle menu. The smartphone is also getting enhanced SOS functions, quick emergency information display, and optimised 'permission manager.'

The games mode gets a new immersive mode to reduce disturbances while gaming. Realme Narzo 30 Pro 5G users will also be able to change the way they summon the Game Assistant. Realme now also gives users the ability to share their personal hotspot with others via a QR code. The new HeyTap Cloud can now back up media, system settings, WeChat data, and more. It gives the users the option to select the data they want to backup or restore while also creating multiple backups.

The camera app gets a new inertial zoom feature for better zooming capabilities while recording a video. Alongside, it also gets a level and grid feature for videos. There is a new 'Cloud Sync for Private Safe' to allow personal photos to be synced to the cloud. Realme Narzo 30 Pro 5G users also get an optimised photo editing feature with upgraded algorithms along with more markup effects and filters.

Lastly, there is a new Sound Amplifier feature that can "amplify faint sounds and soften loud sounds when wearing earphones."

The firmware version for this update is RMX2117_11.C.03 and it is worth mentioning that Realme Narzo 30 Pro 5G users would need to have these firmware versions - RMX2111PU_11.A.35, RMX2111PU_11.A.37, or RMX2111PU_11.A.39 - before they update to the latest Android software. The size of the update is not known yet but users are still advised to update their smartphone while it is connected to a strong Wi-Fi connection and is put on charge. To manually check for the update, head to Settings > Software update. The update will first roll out to a select number of users and a broader rollout will be conducted once all bugs are fixed.