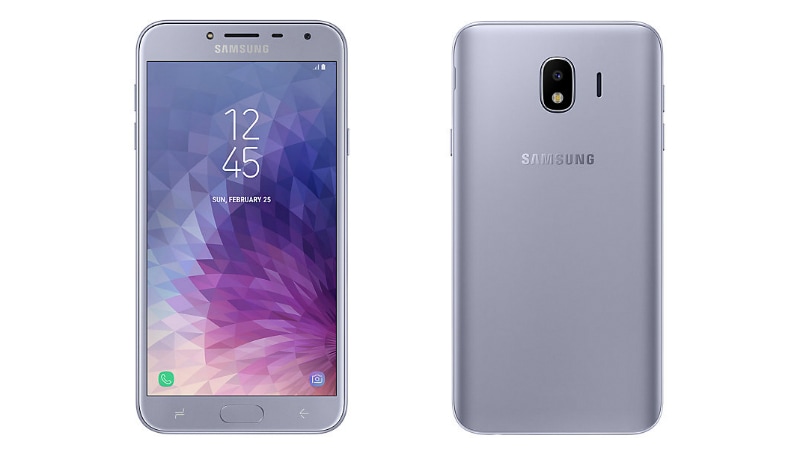 Samsung Galaxy J4, the company's latest budget smartphone, was launched in India on Friday. The phone is part of Samsung's Make for India initiative, and brings features like Adaptive Wi-Fi, Advanced Memory Management, App Pair, and Samsung Mall. To recall, the Samsung Galaxy J4 was first spotted last week in Pakistan and Ukraine. Samsung has launched the Galaxy J4 in two variants in India - 2GB RAM/ 16GB inbuilt storage, and 3GB RAM/ 32GB inbuilt storage. Notably, the smartphone does not sport an Infinity Display with a 18.5:9 aspect ratio, unlike the recently launched Galaxy J6 and Galaxy A6 series in India. However, it comes with Android Oreo, a Super AMOLED display, and an LED selfie flash.

The dual-SIM (Micro) Samsung Galaxy J4 runs Samsung Experience on top of Android Oreo out-of-the-box, and sports a 5.5-inch HD (720x1280 pixels) Super AMOLED display with an 16:9 aspect ratio. The handset is powered by a quad-core Exynos 7570 SoC, paired with 2GB or 3GB of RAM. In terms of optics, the Galaxy J4 gets a 13-megapixel rear camera sensor with an LED flash and support for full-HD (1080p) video recording. On the front, the phone bears a 5-megapixel selfie sensor with LED selfie flash. As for storage, the phone comes with 16GB or 32GB of internal storage, expandable via microSD card (up to 256GB). There is a 3000mAh battery with a claimed battery life of up to 20 hours.

Earlier this month, Samsung announced the launch of the Galaxy J6, Galaxy J8, Galaxy A6, and Galaxy A6+ in India. All these smartphones sport the company's Super AMOLED Infinity Display, while only the Galaxy J8 and Galaxy A6+ come with full-HD+ panels and a rear dual camera setup.