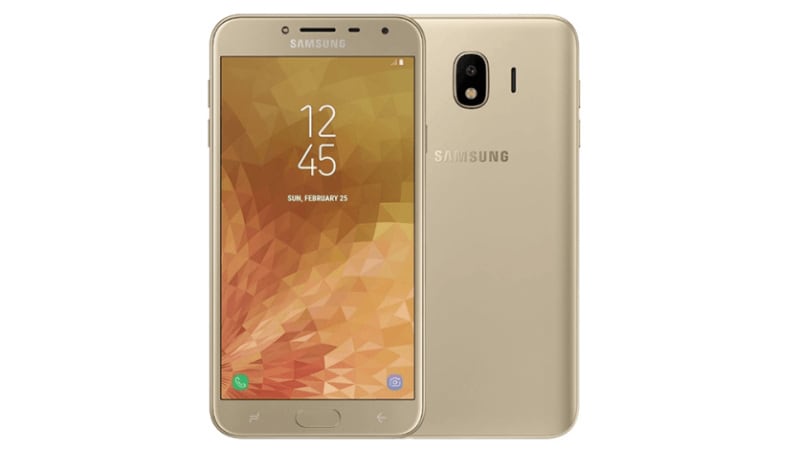 Samsung Galaxy J4 press images have surfaced days after its initial specifications leaked. The renders show that the unannounced Galaxy J series handset will come in two colour options. Previously, some live images of the Galaxy J4 emerged. It was also spotted on some official support pages on Samsung's India, Philippines, and Saudi Arabia sites with model number SM-J400 and reached the National Communication Propagation Committee (NCC) in Taiwan for approval.

As seen from the images, courtesy WinFuture.de, the Samsung Galaxy J4 will be another budget model by the South Korean giant. On the front, the handset appears to have an LED flash to brighten up your selfies, while a physical home button sits at the bottom - in the middle of the touch-supported buttons for recent apps and back actions. The back showed in the renders has a single camera sensor along with an LED flash module and a loudspeaker grill. It seems that the back panel of the Galaxy J4 is made of plastic, though its front is likely to feature a 2.5D curved glass panel.

Folks at WinFuture.de have also revealed some of the Galaxy J4 specifications that match previous reports. The smartphone is reported to have a 5.5-inch HD (720x1280 pixels) Super AMOLED display along with a traditional 16:9 aspect ratio and a quad-core Samsung Exynos 7570 SoC, coupled with 2GB and 3GB RAM options and 16GB as well as 32GB onboard storage versions. The internal storage of the smartphone is also said to be expandable via microSD card.

The camera sensor featured on the back of the Galaxy J4 is claimed to have a resolution of 13-megapixel, while a 5-megapixel camera sensor is reportedly available on the front. The rear sensor is also said to support full-HD (1080p) video recording. Further, it is said that the smartphone will have 4G LTE and Bluetooth v4.1 on the connectivity and dual-SIM support.

Similar to some of the recently launched Samsung handsets, including the Samsung Galaxy A6 and Galaxy A6+, the Galaxy J4 is expected to run Samsung Experience skin on top of Android 8.0 Oreo. The handset is also said to include a 3000mAh battery and come with a thickness of 8.1mm.

Samsung has scheduled an event in India for May 21 where it is expected to launch its new Galaxy A and Galaxy J series handsets, including the Infinity Display featuring Galaxy J6. However, this is not likely to be the place where we expect the arrival of the Galaxy J4. There are speculations that the new Galaxy J series model will instead launch sometime in later this year.

Steam Game Developers That Do Not Censor Sexual Content Will Be Removed: Valve