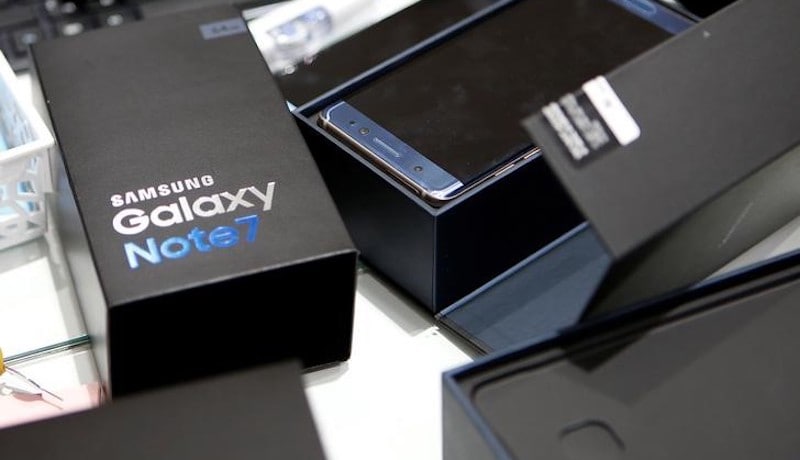 The debacle cost Samsung billions in lost profit and reputational damage, in a torrid period which has also seen it embroiled in the corruption scandal that has resulted in President Park Geun-Hye's impeachment.

Internal and independent investigations "concluded that batteries were found to be the cause of the Galaxy Note 7 incidents," Samsung said in a statement.

"We sincerely apologise for the discomfort and concern we have caused to our customers," Koh Dong-Jin, the head of its mobile business, told reporters in Seoul.

Samsung Electronics is the most prominent unit of the giant Samsung group, South Korea's largest conglomerate with a revenue equivalent to about a fifth of the country's GDP.

It announced a recall of 2.5 million units in September 2016 after several units of Galaxy Note 7 exploded or caught fire, with Samsung blaming batteries from a supplier, widely believed to be its sister firm Samsung SDI.

When Samsung Galaxy Note 7 replacement units - with batteries from another firm, largely thought to be Chinese manufacturer ATL - also started to combust, the company eventually decided to kill off the Galaxy Note 7 for good.

As many as 1.9 million units of the smartphone were sold in the United States, where authorities banned the device from use on planes and even from being placed in checked luggage. Aviation authorities around the world issued similar prohibitions.

Samsung has since embarked on a campaign to restore its battered reputation, issuing repeating apologies and putting full-page advertisements in prominent US newspapers including the Wall Street Journal, New York Times and Washington Post admitting that it "fell short" on its promises.

All eyes on Samsung Galaxy S8

The next model in the series, the Galaxy Note 8, had been expected to be unveiled at next month's Mobile World Congress in Barcelona, but Koh said it would be delayed to ensure that it had no safety issues.

Samsung deployed around 700 researchers and engineers on its investigation, testing more than 200,000 fully-assembled devices and more than 30,000 batteries, it said.

It did not identify the battery makers on Monday, but independent investigators UL and Exponent agreed with the findings.

Battery A had a design issue that pushed down the right corner of the battery, while Battery B had defective internal welds, said Kevin White, principal scientist at Exponent.

No legal action by Samsung

But Koh dismissed the possibility of suing the manufacturers. "Whatever parts we use, the overall responsibility falls to us for failing to verify its safety and quality," he said. "At this point, I don't think it's right to seek legal action.

Around 1,000 different parts from some 450 suppliers were needed for each Galaxy Note 7.

Samsung acknowledged that it provided the specifications for the batteries, adding in its statement: "We have taken several corrective actions to ensure this never happens again. The lessons of the past several months are now deeply reflected in our processes and in our culture."

The fiasco took a major toll on the reputation of the firm, which is set to announce fourth-quarter and full-year results on Tuesday. It has estimated the cost of the recall at $5.3 billion (roughly Rs. 36,080 crores), according to South Korea's Yonhap news agency.

Samsung Electronics shares were up 0.5 percent at KRW 1.87 million in Seoul on Monday morning after the announcement.

More trouble on the side for Samsung

The firm has separately been caught up in South Korea's wide-ranging political corruption scandal, with prosecutors last week seeking the arrest of its vice-chairman Lee Jae-Yong on charges of bribery, embezzlement and perjury.

Lee, who became Samsung's de facto head after his father suffered a heart attack in 2014, is accused of bribing Choi Soon-Sil, Park's secret confidante at the centre of the scandal, and receiving policy favours from Park in return.

Samsung is the single biggest contributor to two non-profit foundations controlled by Choi, but a court rejected the arrest request on grounds of insufficient evidence.