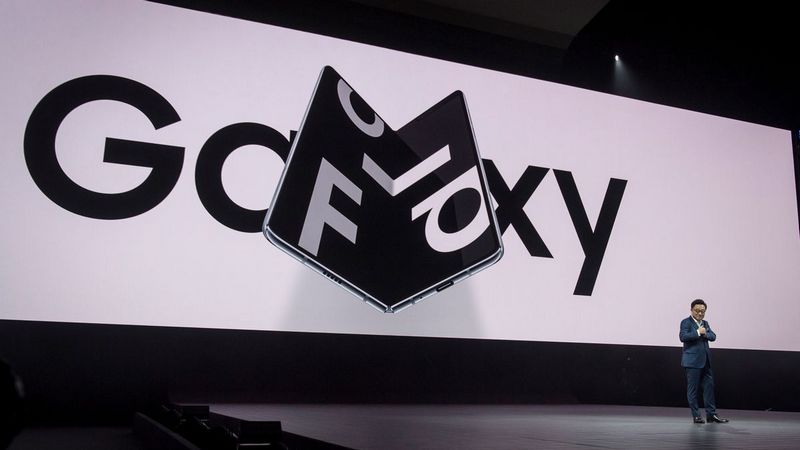 Samsung Electronics is working on a pair of new foldable smartphones to follow its Galaxy Fold, seeking to seize an early lead in new market segment.

The South Korean manufacturer is said to be developing a clamshell-like device, and another that folds away from the user similar to Huawei Technologies's Mate X, people familiar with the matter said, asking not to be identified discussing internal plans. The $1,980 (roughly Rs. 1.4 lakhs) Galaxy Fold that Samsung plans to release in April folds inward like a notebook.

While it's still too early to gauge how much demand there will be for smartphones with flexible screens, Samsung and other rivals are eager to gain an edge over Apple in the $495 billion industry, especially amid cooling sales. Xiaomi is working on a dual-folding phone, according to a video released in January. The iPhone maker hasn't announced any plans for a similar gadget.

“No one knows what the ideal design is yet,” said Bryan Ma, vice president of devices research at IDC. “The time is ripe for experimentation. Many of these designs won't be successful, but industry players will learn valuable lessons along the way.”

A spokeswoman for Suwon, South Korea-based Samsung declined to comment on plans for new foldable phones.

Samsung plans to unveil the vertically folding phone late this year or early next year, and is using mock-ups to fine-tune the design, the people said. The gadget is designed with an extra screen on the outside, but the manufacturer may remove it depending on how customers respond to a similar display on the Galaxy Fold, they said.

The outfolding device, which already exists as a prototype after being considered as Samsung's first foldable gadget, will roll out afterward, the people said. It will be thinner because it has no extra screen, they said.

Samsung may also incorporate an in-display fingerprint sensor for its foldable lineup, as it did for the Galaxy S10 model announced last month, they said.

While Samsung works on new models, it's also trying to improve the durability of the Galaxy Fold's display. They're trying to eliminate a crease that appears on the panel after it's been folded about 10,000 times, and Samsung is considering offering free screen replacements after releasing the product, one of the people said.

The Galaxy Fold's screen imperfection develops on a protective film covering the touch sensor bonded with the display underneath, the person said. That's one reason why Samsung kept the phone inside a glass case at MWC in Barcelona last month, the person said. Samsung's spokeswoman said the Galaxy Fold was displayed that way because it wanted more attention on the soon-to-be-launched Galaxy S10, not because there was a problem with the quality of the foldable device.

Samsung forecasts production of at least 1 million foldable phones this year. The launch of the device comes as the world's biggest phone maker tries to lure back consumers who have become used to incremental upgrades and are being wooed by Chinese manufacturers' lower-priced smartphones.

Samsung, which also produces memory chips and televisions, makes the foldable displays itself and supplies technology to rivals such as Apple. The South Korean company shipped 291.3 million phones last year while Huawei sold 205.8 million, according to Strategy Analytics. Samsung will probably sell more than 40 million units of its flagship Galaxy S10 in the first year of release, according to Counterpoint.

Samsung spent eight years developing the Galaxy Fold and has worked with Google to adapt the Android operating system for a foldable screen. The company also envisions smartphones with rollable and stretchable displays in the future, Samsung Executive Vice President Chung Eui-suk said on the corporate website last month.