Vivo V20 SE Price in India Tipped Ahead of Launch Thanks to Croma, Reliance Digital Listings

Vivo V20 SE Croma listing, as well as the Reliance Digital listing show a Gravity Black colour, but the phone may have another colour option as well. 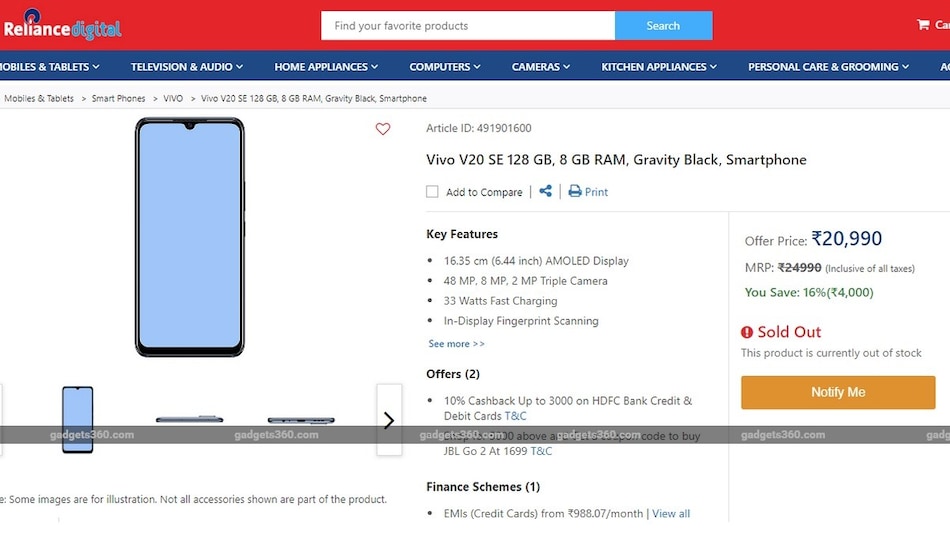 Vivo V20 SE price in India seems to have leaked ahead of its launch, as it was listed on two online retailers. The price was spotted on Croma and Reliance Digital website and while the Croma listing does not show the price anymore, the Reliance Digital listing is still up, at the time of writing. The Vivo V20 SE was originally launched in Malaysia last month and it was offered in two colour options. And, earlier this month, the Vivo 20 was launched in India.

Vivo V20 SE is expected to be priced at Rs. 20,990 for the 8GB + 128GB model, as per listings on Reliance Digital and Croma websites. As mentioned, at the time of writing, while the price was still visible on Reliance Digital, it had been removed from the Croma store. The listings were first spotted by MySmartPrice. The phone is listed in its Gravity Black colour option.

It remains unclear when the phone will be made official in the Indian market. Back in September, when the Vivo V20 SE was launched in Malaysia, it came in a single RAM and storage configuration and was priced at MYR 1,199 (roughly Rs. 21,300). It was offered in Gravity Black and Oxygen Blue colour options. The Blue variant of the phone may make its way to the Indian market as well, however, as of now, the two listings only show the Gravity Black variant.

Both listings mention the specifications of the Vivo V20 SE and it comes with the same internals as the Malaysian variant. The dual-SIM (nano) Vivo V20 SE runs Funtouch OS 11 on top of Android  10. It features a 6.44-inch full-HD+ (1,080x2,400 pixels) AMOLED display with a 20:9 aspect ratio. Under the hood, the phone is powered by the octa-core Qualcomm Snapdragon 665 SoC with 8GB of RAM.

The Vivo V20 SE comes with 128GB of storage. Connectivity options include 4G LTE, Wi-Fi, Bluetooth 5.0, GPS/ A-GPS, FM radio, and a USB Type-C port. Sensors on board include an accelerometer, ambient light sensor, magnetometer, and a proximity sensor. There is also an in-display fingerprint sensor. The phone is backed by a 4,100mAh battery that supports 33W FlashCharge fast charging. In terms of dimensions, the Vivo V20 SE measures 161x74.08x7.83mm and weighs 171 grams.