Vivo X60 Series to Launch in India Today: How to Watch Livestream, Expected Price, and Specifications 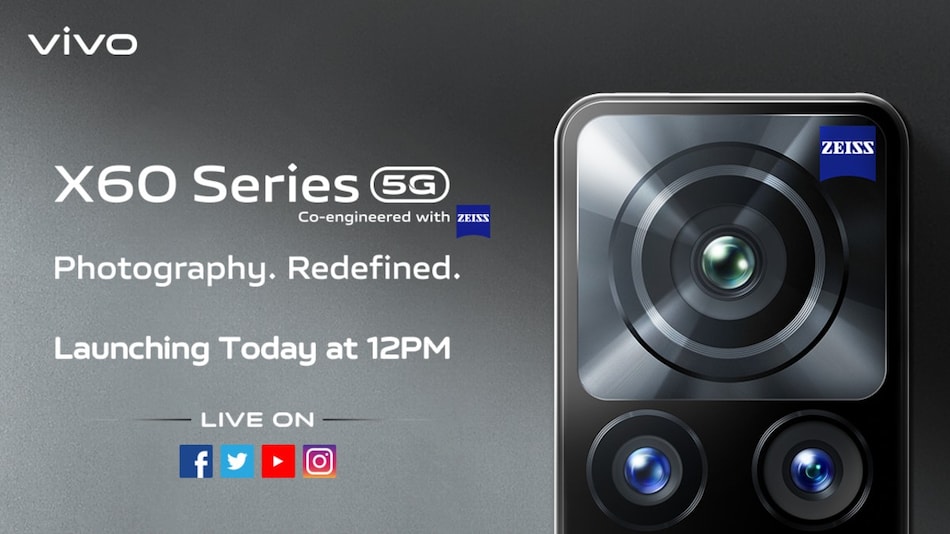 Vivo X60 series launch in India will take place through a livestream that will begin at 12pm (noon) today. The livestream will be available through the Vivo India Facebook, Instagram, Twitter, and YouTube accounts. You can also watch the launch below:

Although Vivo hasn't yet provided any details about the pricing of the Vivo X60 series in India, a recent report suggested the prices that may get an official confirmation at today's launch. According to the report, Vivo X60 could be available with a price tag of Rs. 39,990 for the 8GB + 128GB storage variant and Rs. 43,990 for the 8GB + 256GB storage model. Vivo X60 Pro and Vivo X60 Pro+, on the other hand, are expected to be available at Rs. 49,990 and Rs. 69,990, respectively, for the single 12GB + 256GB storage configuration.

Amazon and Flipkart both recently teased the online availability of the Vivo X60 series in the country.

Under the hood, Vivo X60 and Vivo X60 Pro both come with the Qualcomm Snapdragon 870 SoC, along with 12GB RAM and 256GB of onboard storage.

Vivo X60 and Vivo X60 Pro both come with a triple rear camera setup that comprises a 48-megapixel primary sensor with an f/1.48 lens, a 13-megapixel secondary sensor, and a 13-megapixel tertiary sensor. For selfies and video chats, the phones have a 32-megapixel camera at the front, with an f/2.45 lens.

Vivo has provided a list of connectivity options on both X60-series phones. These options include 5G, 4G LTE, Wi-Fi, Bluetooth 5.1, GPS/ A-GPS, NFC, and a USB Type-C port. The phones also come with an in-display fingerprint sensor.

Vivo X60 Pro+ has a quad rear camera setup that houses a 50-megapixel primary sensor with an f/1.57 lens, a 48-megapixel ultra-wide-angle shooter, a 32-megapixel portrait sensor, and an 8-megapixel periscope shooter. There is also a 32-megapixel selfie camera at the front.