Vivo X60 Pro is the successor to the X50 Pro, and it promises better performance and cameras 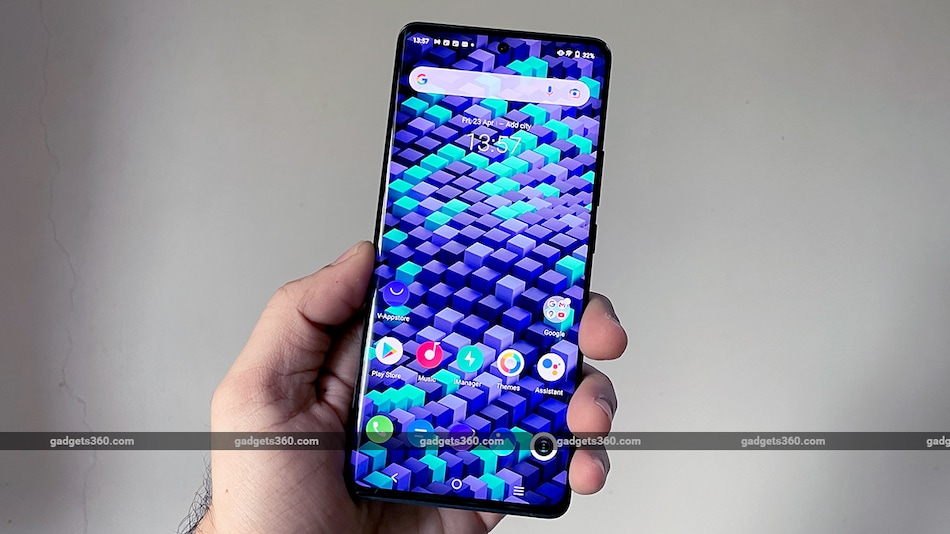 The Vivo X50 Pro was the first smartphone to launch with a gimbal camera system in India. This enabled the primary camera sensor to move physically in order to compensate for shakes and wobbles. Vivo has now launched the Vivo X60 Pro, the successor to the X50 Pro, which claims to improve upon the original. The Vivo X60 Pro also packs in the new Qualcomm Snapdragon 870 SoC which should help it deliver on the performance front as well. I put the X60 Pro through all our usual tests to see how it fares.

The Vivo X60 Pro is priced at Rs. 49,990 in India. It features 12GB of RAM and 256GB of storage. This smartphone is offered in two colour options, Midnight Black and Shimmer Blue.

The Vivo X60 Pro looks similar to its predecessor, the Vivo X50 Pro (Review). While the design is largely unchanged, this isn't an issue since it still looks appealing. The Vivo X60 Pro has a 6.56-inch AMOLED display that curves on the sides just like the older Samsung Galaxy S series smartphones. This makes the side bezels look small, giving the panel an edge-to-edge feel. The top and bottom bezels are slim too and Vivo has kept the selfie camera hole small offering minimal distraction. The display is also protected with Schott Xensation Up glass.

The AMOLED display curves to meet the metallic frame of the Vivo X60 Pro, and everything looks and feels premium. The midframe is thinner on the sides to accommodate the curved display and glass back panel. The curved display and back give the X60 Pro a sleek side profile making it comfortable to hold. I found the power and the volume buttons to be well positioned and reaching them wasn't an issue. These buttons are also made out of metal and the power button has a textured finish which makes it easy to distinguish. There are no ports or slots on the left side of the phone, and the top only has the secondary microphone. At the bottom, the Vivo X60 Pro has its USB Type-C port, SIM tray, primary microphone, and loudspeaker.

Vivo has opted for Corning Gorilla Glass 6 for the back, so it should be able to withstand scratches and small accidental drops. The back panel has a matte finish which helps keep fingerprints off the device. Vivo hasn't changed the camera module design, which is now common across the X series. The camera module has a Zeiss logo this time, thanks to Vivo's partnership with Zeiss for the camera lens.

The Vivo X60 Pro lacks waterproofing and does not have an IP rating, something that's expected at this price point in the market. It also misses out on wireless charging.

The big 6.56-inch AMOLED display sports a full-HD+ resolution and has a maximum refresh rate of 120Hz. The smartphone is set to Smart Switch by default which lets the phone switch between 60Hz and 120Hz automatically. Alternatively, you can set it to either refresh rate. Vivo also claims a 240Hz touch sampling rate for the display

The Vivo X60 Pro is powered by the Qualcomm Snapdragon 870 SoC with 12GB of LPDDR4X RAM and 256GB of UFS 3.1 storage. Vivo has also introduced Virtual RAM with the Vivo X60 Pro, which basically uses about 3GB of storage space as virtual RAM. You do have the option to switch this option off and reclaim the 3GB of storage if required. You get a 4200mAh battery on the Vivo X60 Pro which is decent given that it is just 7.59mm thick. Vivo has bundled a 33W charger which should be able to charge the phone quickly. Connectivity options include dual-band Wi-Fi, Bluetooth 5.1, 4G VoLTE, and 5G. It has six navigation systems but surprisingly misses out on NFC.

Vivo ships the smartphone with Funtouch OS 11.1 based on Android 11. The UI does not have any major changes compared to stock Android, and I found it to be easy to use. If you like customising your smartphone, Vivo offers different animations as well as themes using the Theme app.

I did find a fair number of preinstalled apps on the smartphone including Amazon, Dailyhunt, Flipkart, Facebook, Snapchat, Moj, V-Appstore and a lot more. You can uninstall all of them except V-Appstore which is the company's alternative to the Play Store. I did get a few notifications from V-Appstore and Dailyhunt, which was annoying.

The Vivo X60 Pro delivered excellent performance without any lag or stutter. The UI felt smooth and responsive while scrolling through menus. I did set the refresh rate to 120Hz and it made scrolling buttery smooth. I found the display to be crisp with excellent viewing angles and good brightness. Watching videos on this display panel felt engaging, but a stereo speaker setup would have enhanced the experience further. The in-display fingerprint scanner on the Vivo X60 Pro is quick to unlock the phone and never needed a second attempt in my experience.

I ran our set of benchmarks to see where the Qualcomm Snapdragon 870 SoC stands with respect to the competition. The Vivo X60 Pro posted an impressive 716,817 in AnTuTu (version 9) and 12,049 in PCMark Work 2.0. Graphics benchmarks were good as well, and the smartphone managed 120fps and 50fps in GFXBench's T-Rex and Car Chase benchmarks respectively. Vivo's Virtual RAM was enabled on my unit while benchmarking this smartphone but I did run a few tests again after disabling it and the scores weren't drastically different. Virtual RAM is a neat concept in theory but you'll have to push the X60 Pro to its limits to see any noticeable difference in performance, since 12GB of physical RAM is more than adequate.

Call of Duty Mobile ran well with the graphics set to Very High and frame rate at High, and I did not notice any stutter. I played the game for 30 minutes and noticed a 9 percent drop in battery life. The X60 Pro was slightly warm to the touch but not too much. If you are looking to play heavy titles, this Vivo can take them on quite easily.

With my usage I had to charge the X60 Pro every other day, and that wasn't a big issue. Excessive gaming and camera usage tends to drain the battery a bit faster, so you might need to plug the phone in sooner depending on your use. The Phone lasted for 14 hours and 56 minutes in our HD video loop test, which is a decent score given the 4,200mAh battery it packs in. The supplied 33W fast charger is capable of taking the battery to 53 percent in 30 minutes and 96 percent in an hour.

The Vivo X60 Pro sports a triple camera setup at the back,which isn't significantly different from that of the Vivo X50 Pro in terms of specifications. The primary camera has a 48-megapixel sensor (Sony IMX598) and gimbal stabilisation. This sensor is capable of physically moving to compensate for minor shakes while shooting photos and recording videos. There is also a 13-megapixel ultra-wide angle camera and a 13-megapixel portrait camera. The ultra-wide angle camera is tasked with shooting macros, and the AI can detect when you are close enough to a subject and switch cameras automatically. Vivo's camera app was easy to use and I wasn't overwhelmed with too many different shooting modes. You can stick to the basic modes or dive into the Pro mode for complete control. The camera has AI scene optimisation enabled by default and it was quick to detect scenes when I was taking shots.

Daylight photos shot with the Vivo X60 Pro were good and had good details in the highlights, while the shadows were underexposed and not as sharp. There was a noticeable drop in the image quality of photos shot using the ultra-wide-angle camera, although it seemed to meter light better.

You do have the option to shoot photos at full resolution, resulting in 48-megapixel shots that take the phone about two seconds to capture. The output had better details than default 12-megapixel shots, but fine grain was visible at 100 percent magnification on screen.

Close-up shots were good, with adequate detail and a soft depth of field for the background. The AI seems to boost contrast very slightly. The camera app switches to macro mode automatically when you are close enough to a subject. The resulting 13-megapixel macros have good detail. You also have the ability to crop these shots thanks to the higher resolution than you get with most dedicated macro cameras.

Portraits taken with the 13-megapixel portrait camera were crisp, and it managed good edge detection. You do have the option to set the level of blur before taking a shot, Beautification is enabled by default, and this smoothens the output.

Selfies shot using the 32-megapixel front camera were crisp in daylight as well as low light. You can take selfie portraits as well, and the phone could detect faces even with masks on. Photos had good edge detection and I could set the level of blur before taking a shot.

Video recording tops out at 4K for the primary camera and 1080p for the selfie shooter. Thanks to the gimbal stabilisation system, the Vivo X60 Pro could stabilise footage at all resolutions. There are two stabilisation modes; standard, which worked well when I recorded footage while walking, and “Super anti-shake”, which tried stabilising footage even when I was running. The Vivo X60 Pro did manage to smoothen footage quite well while I was walking but running was a bit too much for the camera to manage. Even in low light, the X60 Pro did a good job at stabilising videos with only occasional shimmer in the output.

The Vivo X60 Pro is a good successor to the Vivo X50 Pro, and improves in areas that the latter lacked in. Performance has gotten a good bump thanks to the Qualcomm Snapdragon 870 SoC. Photo and video quality are also better than with the predecessor.

Priced at Rs. 49,990 the Vivo X60 Pro costs as much as the outgoing model and faces competition in the form of the OnePlus 9 (Review), the Asus ROG Phone 5, and the just-announced Xiaomi Mi 11X Pro. Your choice of smartphone will completely depend on your expectations – the OnePlus 9 packs in a more powerful processor and could offer better software updates based on OnePlus' track record. The Asus ROG Phone 5 on the other hand is an outright gaming smartphone that is purpose-built. The Xiaomi Mi 11X Pro offers the same processor along with a triple camera setup at a significantly lower starting price of Rs. 39,990.

The main strength of the Vivo X60 Pro is its gimbal stabilisation system which helps it deliver better video performance than the competition. So if you are looking to shoot a lot of video with your smartphone, the Vivo X60 Pro will fit the bill just fine.