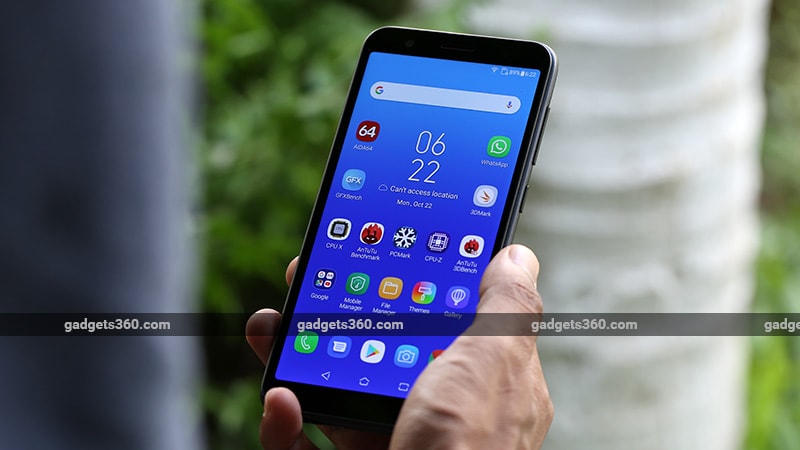 Asus recently launched two smartphones in India, the ZenFone Max M1 and the ZenFone Lite L1. These smartphones are both priced under Rs. 9,000 and are aimed squarely at the Xiaomi Redmi 6 (Review) and the Redmi 6A (Review) respectively. We have already reviewed the ZenFone Max M1, and while its performance suffered due to an ageing processor, it did offer good battery life. The ZenFone Lite L1 has the same processor but loses a few other features and is priced more aggressively at Rs. 6,999, with an even lower temporary festive offer price of Rs. 5,999. Is the ZenFone Lite L1 a good bargain at either of those prices? We take it for a spin to find out.

The ZenFone Lite is compact and easy to use

This phone has a 5.45-inch display at the front with an 18:9 aspect ratio. The size makes it easy to use in one hand, and all corners of the display are easy to reach. It has equally thick borders all around but misses out on the 2.5D curved glass that the ZenFone Max M1 sports. The phone weighs only 140g. The back seems minimalist, as it only has the single camera and a flash at the top left corner, and an Asus logo in the centre. The 3.5mm headphone jack is on the top of the phone while the Micro-USB port and the loudspeaker are at the bottom.

The ZenFone Lite L1 is a budget offering that is powered by the same slightly old Qualcomm Snapdragon 430 processor as the ZenFone Max M1. It is an octa-core SoC with all cores clocked at 1.4GHz. There is 2GB of RAM and 16GB of internal storage, which is expandable using the microSD card slot which accepts cards of up to 256GB. The direct competitor to the ZenFone Lite L1, the Redmi 6A, sports a more recent Mediatek Helio A22 processor.

The IPS display has an HD+ resolution and decent viewing angles, and is acceptable for the price. This phone also has support for Bluetooth 4.0, Wi-Fi 802.11b/g/n, GPS, and GLONASS. The ZenFone Lite L1 is a dual-SIM device and has two Nano-SIM slots. There is support for 4G and VoLTE on both SIMs, but only one can connect to 4G at a time. The phone packs in a 3000mAh non-removable battery and gets a 5.2W charger in the box.

Asus ships the ZenFone Lite L1 with Android Oreo and ZenUI on top. There are a few customisations and you get apps including Facebook, Facebook Messenger, Instagram, and a few Google apps. Asus has also installed some of its own apps such as Weather, Sound Recorder, Mobile Manager, and File Manager. Asus has a PowerMaster feature that lets you choose between different battery modes and power saving options.

While the UI is smooth, we did observe it slowing down when a couple of apps were running in the background. Compared to the ZenFone Max M1, the lower amount of RAM on the ZenFone Lite L1 causes longer load times and random slowdowns. Out of the 16GB of storage, you will get around 8GB free for apps and games. With the file sizes of apps and games ballooning, we had to uninstall a few apps to make way for others during our review period.

We tried using a microSD card but the phone did not give us the option to format it and use it as fixed storage. If you are using multiple heavy apps, this might not be the best pick out there.

The ZenFone Lite L1 lets you set up face recognition to unlock the smartphone, and it takes about two seconds to unlock the phone.

In AnTuTu, this phone managed to score 55,690 points which is lower than the score of the Xiaomi Redmi 6A, which it is pitted against. The ZenFone Lite L1 scored 664 and 2394 respectively in Geekbench's single-core and multi-core tests. It also returned 25fps in GFXBench and 599 in 3DMark Slingshot.

PUBG Mobile took a long time to load on this phone, but it was able to run at the lowest settings. The touch response of the display was a little slow as well. We saw stutters during gameplay as well as relatively high battery drain. Alto's Odyssey also had occasional slowdowns.

In our HD video loop test, the ZenFone Lite L1 managed to go on for 9 hours 10 minutes which is less than the ZenFone Max M1 managed, thanks to the smaller battery that this phone has. With our usage consisting of playing games for half an hour, and an active WhatsApp account, it lasted us over one day without needing to be plugged in.

Just like the ZenFone Max M1, the ZenFone Lite L1 also has a 13-megapixel rear camera, and the camera app is identical. Photos taken with the ZenFone Lite L1 are average at best. Zoom in to a landscape shot and you will see fine grain. You can use the HDR toggle when shooting bright scenes, and it does improve the output. The phone couldn't focus on a subject when we tried to shoot macros. Overall, photo quality was decent in daylight but not as good as that of the ZenFone Max M1. In low light, camera performance drops down a notch. It fails to capture good details and the aggressive noise reduction causes a filter-like effect in the output.

Selfies taken with the ZenFone Lite L1 are good enough to be shared on social media apps and this is acceptable for the price. The phone also has a selfie flash which comes in handy in dark environments. Portrait mode is available for both the primary and the selfie camera, but the edge detection isn't great. We also found the background blur to be a very aggressive, causing it to look artificial. Video recording maxes out at 1080p for both the primary and the selfie camera. There is no video stabilisation, available leading to shaky footage.

Verdict
The Asus ZenFone Lite L1 is priced aggressively at Rs. 6,999 but is available for Rs. 5,999 during Flipkart Festive Dhamaka Days sale. The Snapdragon 430 is slow compared to the newer processors that are available in other phones in the market, and the 2GB of RAM creates another bottleneck holding this phone back from delivering a fluid experience. If you are on a strict budget, you might want to consider the Xiaomi Redmi 6A (Review) instead, otherwise we would recommend that you put in a little more money and opt for the ZenFone Max M1 (Review) instead or look at other alternatives like the Realme C1 (Review).