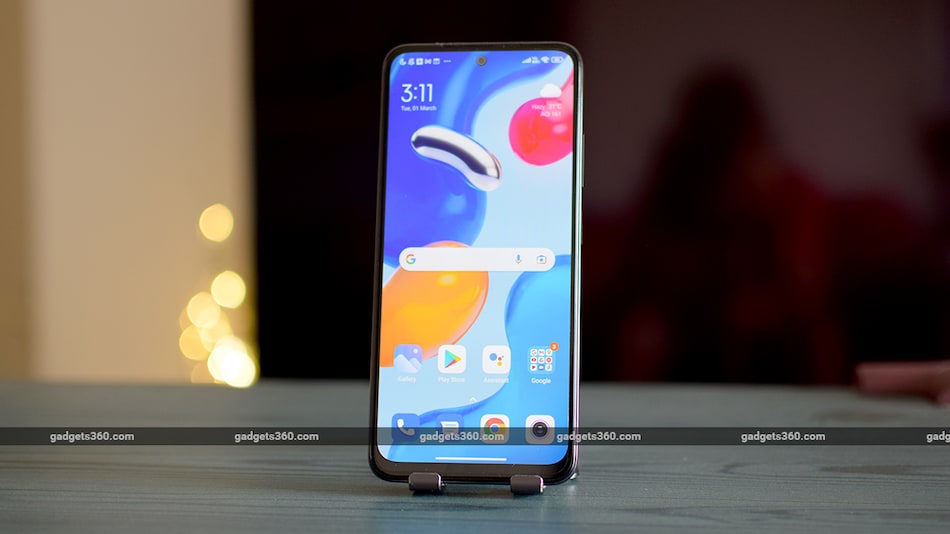 Xiaomi is back to doing what it does best, flooding the mainstream smartphone market with a tonne of options so no matter what your budget is, there's a Redmi phone for you. We've seen many other companies adopt this strategy too, and while it does create a confusing mess, it also means there's a lot of choice.

Take for example, the new Redmi Note 11S. This is a 4G-only smartphone, which to begin with, is a little odd since the Redmi Note 11T 5G (Review) which came before it supports 5G. The main attraction here is the 108-megapixel rear camera. This is the same sensor previously used on the Redmi Note 10 Pro Max last year, but now Xiaomi is offering it at a lower starting price. However, with the Redmi Note 11 Pro series right around the corner, where does the Redmi Note 11S really fit in, and should you even be considering it?

The design of the Redmi Note 11S is a bit too bland for my liking. The blue and polar white trims look a bit better in photos, but the black unit that I have is just plain boring. The plastic frame and back panel are well built and the phone is quite comfortable to hold. It's not too heavy at 179g or thick either. The main camera sticks out further than the rest of the camera module, which makes the Redmi Note 11S unsteady if you're trying to use it on a flat surface.

Xiaomi has gone for a 6.43-inch AMOLED display with a pretty high peak brightness of up to a claimed 1000nits. However, the rest of the specs are nothing to shout about. It has a 90Hz peak refresh rate, a basic 180Hz touch sampling rate, and Corning Gorilla Glass 3 for scratch protection. The full-HD+ resolution ensures sharp visuals, and colours are generally punchy. You'll have to manually enable the 90Hz refresh rate on the Note 11S, since it's set to 60Hz by default.

The Redmi Note 11S has a plastic body which has helped keep the weight low
Photo Credit: Roydon Cerejo

The Redmi Note 11S supports two Nano-SIM cards and a microSD card, all in the same tray. The dedicated storage expansion slot is handy since the Redmi Note 11S has a maximum of 128GB of built-in storage. The phone also has dual speakers, a Type-C port, an IR emitter, and a headphone jack. It even has an IP53 rating for water and dust resistance, which is not common in this price segment. The box includes a 33W fast charging adapter, USB Type-C cable, SIM eject tool and a case.

This phone is powered by the MediaTek Helio G96 SoC, which is decently powerful but not the most efficient since it's built on an older 12nm fabrication process. The Redmi Note 11S supports dual-band Wi-Fi ac, Bluetooth 5, and all the basic satellite navigation systems. It also has a 5,000mAh battery, which should be enough to last a full day on one charge, at the very least.

The Redmi Note 11S runs MIUI 13, but this version is still based on Android 11 and not 12. It's a familiar experience if you've used any recent Xiaomi smartphone. All the usual theming options, shortcuts and gestures are present, along with a tonne of preinstalled apps. All the third-party apps can be uninstalled but some first-party ones such Mi Pay cannot be.

The Redmi Note 11S offers enough grunt to handle basic apps and games well. Certain apps in MIUI 13, such as GetApps, can be spammy. There's a capacitive fingerprint sensor in the power button, which worked well in my experience. Thanks to the AMOLED panel, you can take advantage of a sort of always-on display feature. This could have been more useful, but it only stays active for 10 seconds at a time — so it isn't actually ‘always on'.

Videos looked good on the phone's display but the stereo sound wasn't well balanced as the bottom speaker sounded a lot clearer than the earpiece. Games ran well enough, but some heavy ones ran with restricted graphics options on this phone. For instance, Call of Duty: Mobile didn't even show the ‘High' graphics option and I wasn't able to use most of the advanced quality toggles either. Gameplay was smooth though, it's just that it didn't look as good as it normally does.

Xiaomi says it has used a liquid cooling system to keep the phone running cool even under stress but after a 30 minute session of Call of Duty, the back and the frame still got quite warm. The Redmi Note 11S performed predictably in tests and in real-world usage given its specifications – benchmark scores were a bit lower than what the Redmi Note 11T 5G managed with its MediaTek Dimensity 810 SoC. The Note 11S scored 3,10,732 points in AnTuTu and ran at 51fps in GFXBench's T-Rex test.

Battery life was thankfully pretty good. The 5,000mAh battery easily offered an entire day's worth of runtime, even with heavy use. With lighter workloads, you can expect to go longer between charges. There's 33W fast charging which helps charge the battery fairly quickly.

The main 108-megapixel camera on the Redmi Note 11S uses the Samsung HM2 sensor. It captures 12-megapixel pixel-binned photos by default, but you can take photos at the native 108-megapixel resolution too. Under bright sunlight, this camera managed good detail but colours in photos tended to look wildly exaggerated, with the AI feature on or off. The optional Pro Colour mode boosted vibrance even further, making photos look very artificial. Shooting at the full 108-megapixel resolution offered much better detail, but more importantly, colours were better controlled and objects looked a lot more natural in my tests.

Is the 108-megapixel sensor in the Redmi Note 11S as good as Xiaomi is making it out to be?
Photo Credit: Roydon Cerejo

The Redmi Note 11S had a bit of trouble with autofocus when shooting close-up subjects with the main camera, and it took a couple of taps on the viewfinder at times to lock focus correctly. Close-ups looked good under controlled lighting, but under bright sunlight, colours often went for a toss. The main sensor really struggled in low light. Shooting at the full 108-megapixel resolution wasn't of much help and my only option was to use Night mode. This takes a couple of seconds longer to capture a shot, but you do get slightly better detail and exposure. Surprisingly, you can't use Night mode with the ultra-wide or the selfie cameras, which is a real shame.

The 8-megapixel ultra-wide camera has a more restrained colour profile when shooting during the day, which for once, is a good thing. Low-light photos came out expectedly weak and blurry, with poor colour reproduction. The Redmi Note 11S has a basic 2-megapixel macro camera, not the impressive tele-macro one we had on the Note 10 Pro series, so the results are not as good. There's also a 2-megapixel depth sensor.

The 16-megapixel selfie camera captured decent photos during the day, however I noticed quite a bit of oversharpening when using Portrait mode for the same frame. Selfies taken indoors were decent provided there was good ambient lighting, but outdoors at night, the quality was quite weak.
The Redmi Note 11S can record video at only up to 1080p, with stabilisation, however the quality was strictly average even when shooting in broad daylight. In low light, the quality was really poor and not up to the mark for a phone in this segment.

The Redmi Note 11S feels like a bit of a stopgap solution till the Redmi Note 11 Pro series arrives, and if you've set your heart on a Redmi phone already, then last year's Redmi Note 10 Pro actually offers better value at the same price. The 108-megapixel camera is this phone's main selling point. It can capture good photos if you're shooting at the native resolution during the day, but otherwise it's strictly average, as are the rest of the sensors. The SoC isn't particularly powerful for a phone in this price segment, and the lack of 5G doesn't help its case either.

I think it would be best to hold off for a while before you make any purchase decision regarding this phone, as better options are sure to launch soon.