In the video, we can see three sets of four mysterious light formations flying above the clouds. 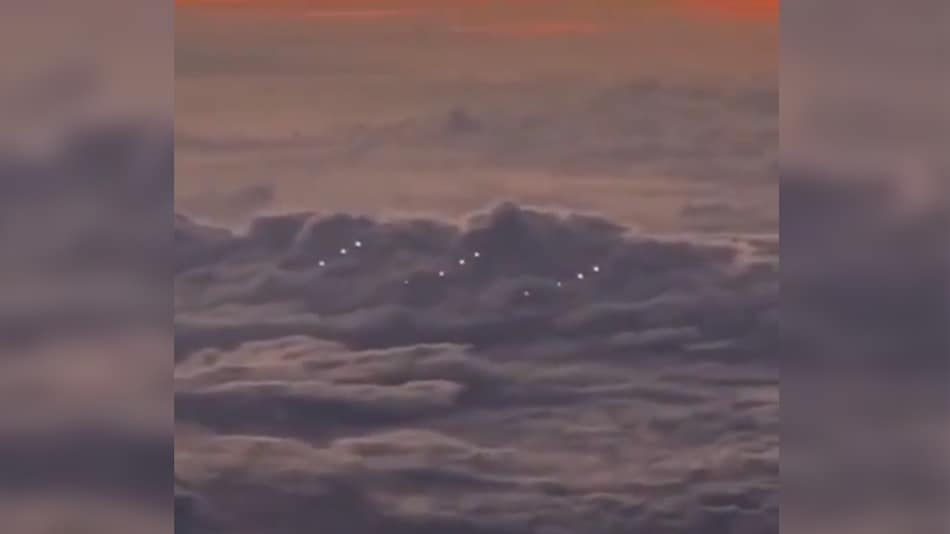 The video lacks clarity, but the mysterious lights can easily be spotted

A video reportedly recorded by an American military pilot over the South China Sea shows a dozen unidentified flying objects (UFOs) near Hong Kong, before suddenly disappearing into the clouds. The video shows three sets of four mysterious light formations flying in the distance above the clouds. It was filmed on November 24 and has been widely shared on social media, inviting baffling reactions from users. Some of them thought the lights were “alien” aircraft and others thought the lights were “floating angels.” However, some users wondered whether it could have been a military exercise.

“I don't know what that is,” the pilot is heard saying in the video. The 53-second video ends with the mysterious lights vanishing. The pilot, who was reportedly flying at an altitude of 39,000 feet, was not far from Hong Kong when he witnessed the lights flying in unison at a distance. The lights resembled no known aircraft.

The suspected #alien aircraft took the form of ‘weird' rotating lights moving across the sky. ????

The video has garnered more than 1 lakh views so far and a plethora of speculative comments.

“At first I thought about cockpit glass reflection… but no… it's not consistent with that. Now I'm thinking, could it have been a military countermeasure exercise?” said user @Kane4USA.

At first I thought cockpit glass reflection… but no… it's not consistent with that.

Now I'm thinking, could it have been a military countermeasure exercise? https://t.co/8hKErpf7zc

Another user (@SalLidD00D) dismissed the idea that the lights were a reflection from the cockpit, saying if it were so people would see the lights from the beginning. “So no. Not a reflection.”

A report in the American Military News stated that the pilot reported the video to UFO tracking website, UFO Stalker, on December 4.

According to a report by The Independent, US Director of National Intelligence Avril Haines had said last month that she would not rule out the possibility of extra-terrestrial life. “There's always the question of ‘is there something else that we simply do not understand, that might come extraterrestrially?'” she had stated at the time.

Mysterious objects have been seen in the sky in the past, too, but no official statement has been made about it, according to The Independent.

Prime Minister Narendra Modi's Twitter Handle Briefly Compromised, Bitcoin Adoption Tweet Put Out by Hackers
Amazon Prime Membership to Get Costlier by Up to 50 Percent Starting December 14: All You Need to Know