Samsung is entering the smart home speaker game with the Galaxy Home Mini in hopes to take some market share from Alexa and Google Home Mini devices. 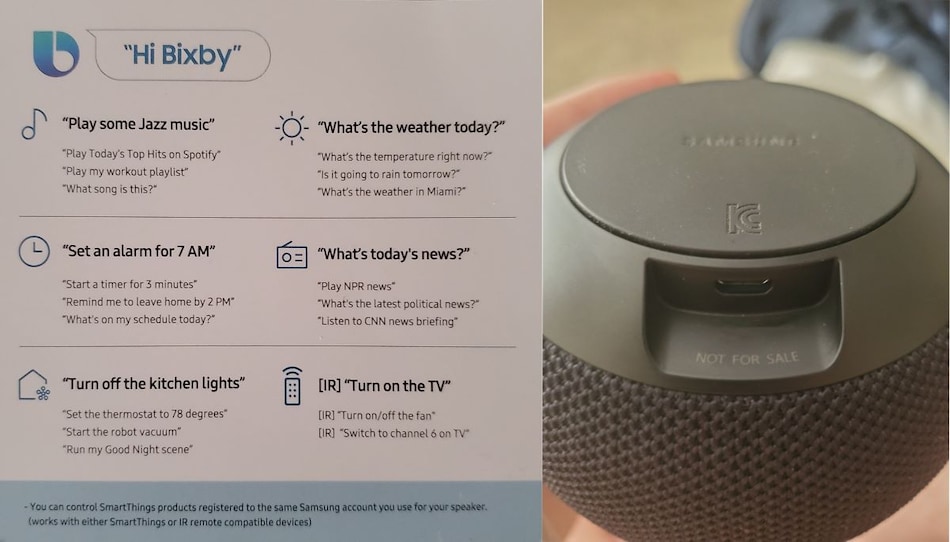 Samsung Galaxy Home Mini will have to compete with Google Home and Amazon Alexa devices.

Samsung will be unveiling its second foldable phone, the Galaxy Z Flip, and the Galaxy S20 lineup of phones today in California at its Unpacked 2020 event. The company is also working on a smart home voice assistant similar to the Google Nest Mini, called the Galaxy Home Mini, which it will announce the next day. But, photos and videos of the device have already popped up on Twitter, thanks to tipster Max Weinbach. The Galaxy Home Mini works with the command “Hi Bixby” and the photo shows a host of features and commands the work with the device.

The list of commands show that the Samsung Galaxy Home Mini can do all the basic tasks that we now expect from our smart home assistants, the Alexas and the Google Nests. You can ask it to play song on Spotify, set alarms, tell you about the weather, news and control your other smart devices. One interesting feature that makes the Galaxy Home Mini stand out is the IR blaster. With this, you can control your appliances at home like the TV, air conditioner, set-top boxes, and other devices that have IR remotes. The speaker has sound by AKG so audio output should be comparable to the competition.

Another photo shared by the Weinbach shows a Micro-USB port but no 3.5mm jack. You won't be able to connect your speakers at home but at least you can stream music via Bluetooth. One of the videos show the ring light on the device quite similar to the Alexa devices. The leak also states that the Galaxy Home Mini will have support for only 2.4GHz Wi-Fi.

The Google Nest and Amazon Alexa devices are fighting for the top spot for the preferred smart home speaker and the Galaxy Home Mini will have to compete in this already competitive market as well.