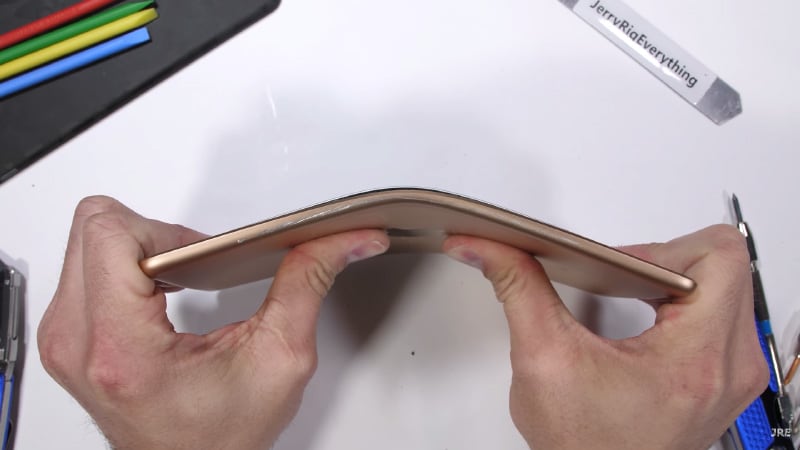 Apple products are usually quite durable, and while opinions differ on their repairability aspect, they're not known to break at the slightest manhandling. But the last time Jerry Rig Everything did his stress test with the iPad Pro (2018), it bent rather easily, complete with a shattered display. Now with the new iPad models out, and more importantly, a new iPad mini (2019), one couldn't help but wonder if it suffers from the same weaknesses. The good news is - it doesn't.

Jerry Rig Everything's latest video shows that while the iPad mini (2019) does bend when considerable pressure is applied, the screen surprisingly doesn't shatter and remains perfectly functional even in its bent shape. You can see for yourself in the video below.

Unlike the iPad Pro (2018), which had 'structural weak points' thanks to its port placements, the iPad mini (2019) has a considerably more solid frame. The device would not bend beyond a certain point, and while there were gaps caused by the adhesive getting loosened by the test, the LCD display remained intact.

Earlier, the iFixit team had reported that the iPad mini (2019), like other Apple products, isn't an easy-to-repair device. Many components on the new tablet model are found to have a modular design and can be replaced independently, though a large amount of adhesive on many components and cables make its overall repairability quite complicated. It received a repairability score of 2 on 10.

To recall, the iPad mini (2019) was unveiled last month with Apple Pencil support. While the base model with 64GB Wi-Fi only configuration comes at Rs. 34,900, the iPad mini 256GB variant price goes up to Rs. 48,900. The device comes in Silver, Space Grey, and Gold colour options.

The iPad mini (2019) is yet to reach India. However, it is already on sale in 27 countries, including the US, UK, Germany, Australia, Canada, Singapore, Italy, and Japan.