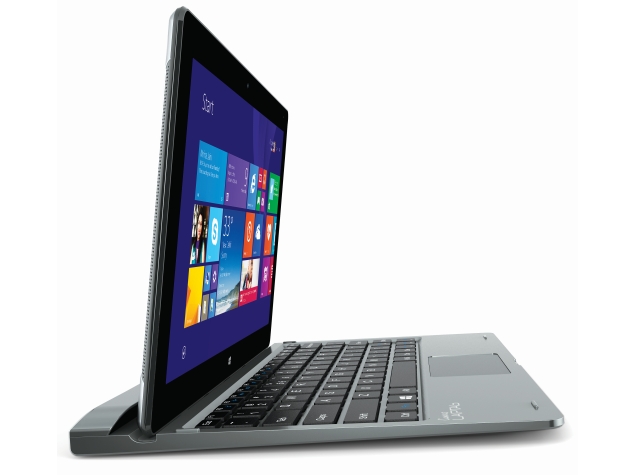 After launching multiple handsets, tablets and television models, Micromax on Thursday entered the laptop-tablet hybrid market with its Micromax Canvas Laptab. The 2-in-1 device will be available starting May 6 initially exclusively on Amazon India at Rs. 14,999.

The single-SIM supporting Micromax Canvas Laptab runs on Windows 8.1 with Bing and is also upgradable to Windows 10 OS. The tablet features an 10.1-inch IPS display with a (1280x800 pixels) resolution. It is powered by a 1.33GHz quad-core Intel Atom Z3735F processor (up to 1.83GHz in Burst mode) coupled with 2GB of DDR3L RAM. It sports 32GB of inbuilt storage, which can be further expanded via a microSD card. The buyers would additionally receive 1TB of cloud storage on Microsoft's OneDrive service.

The Canvas Laptab equips a 2-megapixel rear and front-facing camera and a 7700mAh battery, which is rated to offer a usage time of 10 hours. It measures 210.8x124.2x9.95mm, weighs 1.1kgs and is available in Black colour variant only. Connectivity features of the device feature Wi-Fi, Bluetooth 4.0, USB and 3G. The Micromax Canvas Laptab offers one year of free subscription for Microsoft Office 365 Personal apps. It also houses dual speakers placed either sides on the rear panel.

Commenting on the launch Vineet Taneja, CEO, Micromax Informatics Limited, said, "Today's launch marks our entry into the PC segment, where we intend to drive category growth and not only garner an available market share. We believe that our vision complements the initiatives for Digital India, and we will be launching a range of exciting products over the next few months in the category."

Micromax had first introduced a device called the LapTab back at CES 2014, revealing it would be dual-boot tablet with Android 4.2.2 Jelly Bean and Windows 8. It was set to launch soon after at under Rs. 30,000. This never happened, and over a year later, the Indian brand has brought a Windows-only version of the tablet to India.

The company's foray into the laptop-tablet hybrid market comes after its recent launch of its first 4K TVs in March. The range includes two televisions, the smaller being 42-inches and the larger being 49-inches, priced at Rs. 39,990 (42-inch) and Rs. 49,990 (49-inch).

The TVs feature 4K (Ultra High Definition) display panels with a resolution of 3840x2160 pixels. They are also smart TVs, and run Android 4.4 KitKat with Google Play, Facebook, Twitter, Gmail and other apps preloaded. Navigation is through a Smart Somato-Sensory remote control, which acts as an air mouse to make navigation around the user interface easier.