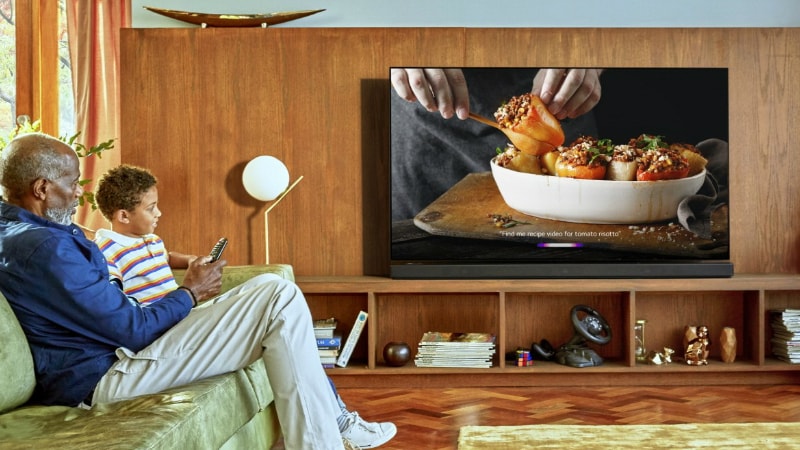 Ahead of CES 2019, LG has unveiled its next-gen TV range that is powered by the company's second-gen Alpha 9 processor paired with ThinQ AI, and comes with Alexa and Google Assistant support both. LG has announced the LG Z9 88-inch 8K TV, W9, E9 and C9 OLED ThinQ AI TVs with Dolby Vision support, and they will be on display at CES this year. LG claims that the Alpha 9 second-gen processor comes with a deep learning algorithm that offers a higher level of AI picture and sound quality, as well as better optimised content by recognising ambient conditions.

The TVs price range will differ depending on the markets, and pricing and availability hasn't been revealed yet. While Google Assistant support already existed on 2018 LG TV range, the 2019 range will also offer Amazon Alexa voice assistant support. The new LG TVs' remote will sport an Amazon Prime Video button that will let users can manage smart home devices, switch channels, ask questions and access tens of thousands of skills and even set up their ideal Alexa Routine.

The 2019 LG TVs will come with an intuitive Home Dashboard that will make it possible to control a wide variety of smart home devices directly from the TV. As mentioned, LG has employed the new Alpha 9 processor in its Z9, W9, E9, and C9 series. The LG 8K 88-inch Z9 OLED TV in particular, boasts higher processing capabilities for delivering the most realistic 8K picture quality that looks sharp, vivid and detailed.

The new processor is claimed to finely adjust the tone mapping curve in accordance with ambient conditions to offer optimised screen brightness. Furthermore, with Dolby Vision support, the LG TVs are claimed to be able to intelligently deliver high-quality HDR under varying ambient light conditions.

The 2019 LG TVs also support Dolby Atmos, said to be augmented by an algorithm that can up-mix two-channel audio to deliver virtual 5.1 surround sound. The Alpha 9 processor is paired with the ThinQ AI that essentially understands the context of a voice command, and decodes complex requests as well. LG says that the service will be available on LG TVs with ThinQ AI in over 140 countries.

Apart from the OLED TV range, LG's 75-inch 8K LCD TV will also be powered by the Alpha 9 second-gen processor. The company says that its 2019 LCD lineup will be revamped, and be called NanoCell TV. All of the OLED TV and NanoCell TV ranges will support HDMI 2.1 ports, and high frame rate of 120 frames per second. For gamers, LG has made the 2019 TV range compatible with variable refresh rate (VRR) as well as automatic low latency mode (ALLM) which helps deliver a clean image, without stutter or tearing. More details, including pricing, will be made available at CES this year.

We discussed 5G, 8K TVs, Keyboards for Xbox One, and everything else you can expect to see at CES 2019 on Orbital, our weekly technology podcast, which you can subscribe to via Apple Podcasts or RSS, download the episode, or just hit the play button below.