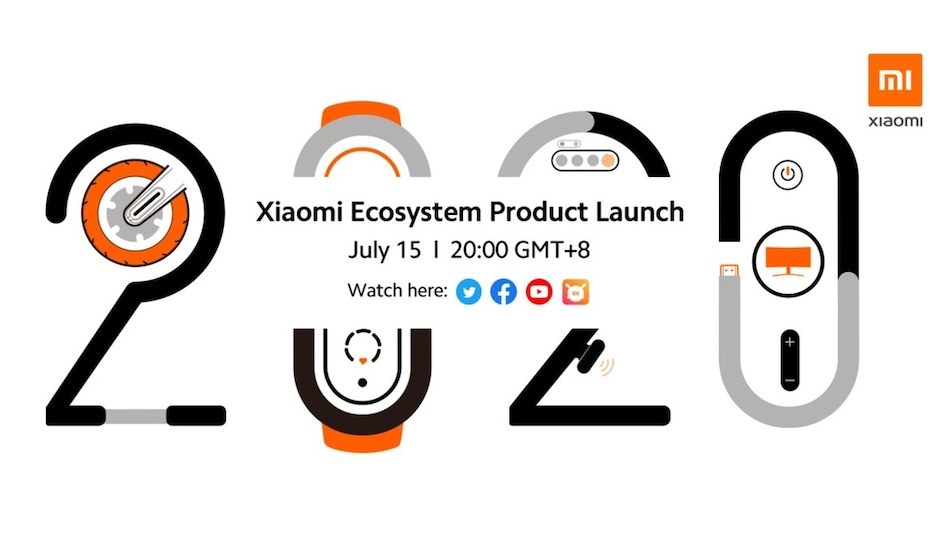 Xiaomi is hosting a global Ecosystem Product Launch 2020 event on July 15, as a part of which, the company is expected to unveil the anticipated Mi TV Stick. The event, which will be streamed live across Xiaomi's social media channels, may also bring the global launch of the Mi Band 5 aka Mi Smart Band 5, Mi Electric Scooter 1s, and the company's recently debuted 34-inch curved monitor, among other devices. Xiaomi isn't likely to consider launching a new phone at its ecosystem-focussed event next week. However, the company is speculated to bring the Redmi 9 as its new affordable smartphone to worldwide markets in the coming days.

The Xiaomi Twitter account on Friday announced the global Ecosystem Product Launch 2020. The launch event is taking place on Wednesday, July 15. It will begin at 8pm GMT+8 (5:30pm IST) and will be hosted via the Twitter, Facebook, YouTube, and Mi Community accounts of the Chinese company.

Xiaomi hasn't provided any details on what it is launching during the event. Nevertheless, the tweet announcing the launch included an image that gives a glimpse at the upcoming devices.

The image suggests that one of the new offerings will be the Mi TV Stick, which was briefly listed on Xiaomi's Portugal store earlier this week. The media streaming device by the company appeared to carry a price tag of EUR 39.99 (roughly Rs. 3,400) and come with full-HD (1080p) video playback support. A 4K version of the Mi TV Stick also seems to be in the works. Moreover, the Mi TV Stick could be Xiaomi's answer to the Amazon Fire TV Stick.

Apart from the Mi TV Stick, the teaser image suggests that Xiaomi is set to globally launch the Mi Band 5 at its event next week. The new Mi Band model was unveiled in China last month with a price tag of CNY 189 (roughly Rs. 2,000) for the basic version and CNY 229 (roughly Rs. 2,500) for the NFC model.

The Mi Band 5 comes with a 1.1-inch AMOLED display, larger than the 0.95-inch screen available on the Mi Band 4. It is also claimed to deliver up to 14 days of battery life on a single charge. The new model also comes with 11 sports mode as well as a Personal Activity Intelligence (PAI) Activity Index.

Xiaomi also appears to be bringing the Mi Scooter 1s to the global markets through its new launch. The Mi Scooter 1s was launched in China in April with a price tag of CNY 1,999 (roughly Rs. 21,500). It comes with a 500W DC brushless motor that has a top speed of 25 kilometres per hour. There are also 8.5-inch shock-absorbing tires.

The new Ecosystem Product Launch event is also expected to bring Xiaomi's curved monitor to new markets. It was introduced in China in October last year in a 34-inch QHD panel. The monitor is currently available at CNY 2,399 (roughly Rs. 25,800).