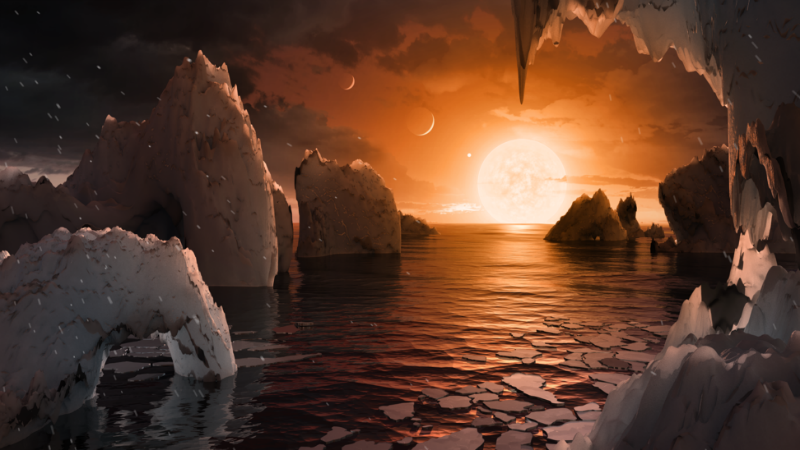 Scientists from NASA announced that they have discovered a star system 40 light years from Earth, named TRAPPIST-1, with a record seven Earth-like exoplanets. TRAPPIST-1’s star is an ultra-cool dwarf and is quite cool compared to our Sun. Three of the seven TRAPPIST-1 exoplanets fall in the habitable zone, which means that they are in an area where water in liquid state can be found. The surface of the planets is said to be rocky, and they are tidally-locked, meaning that one side of any particular planet always has day while the other always has night.

A separate report by South Korea’s ET News says that Samsung Galaxy S8 will go on sale on April 21. The Galaxy S8+ is also expected to hit the market the same day.

Hyperloop One hosting ‘Vision for India’ event on February 28
Hyperloop One, the startup aiming to build high-speed transportation solutions based on the hyperloop concept, has scheduled an event in New Delhi called ‘Vision for India’ for February 28. Shervin Pishevar, the Executive Chairman and Co-Founder of Hyperloop One, and the company’s Global CEO Rob Lloyd will play hosts to Union Railways Minister Suresh Prabhu, while NITI Aayog CEO Amitabh Kant will be the keynote speaker. In January, Hyperloop One released a list of locations vying to test its near-supersonic rail transit system; the list included Delhi and Mumbai. If implemented successfully, the Hyperloop One system can potentially cut down the transit time between the two cities by a huge margin.

Telecom Commission asks TRAI to review mobile tariffs
The Telecom Commission has asked regulatory body TRAI to look at the necessary changes to be made in the current policy to ensure the financial growth of the industry. Reportedly, the reason behind is the 10 percent decline in telecom industry revenues between the second and third quarters of the current fiscal. The commission has asked TRAI to implement orders on promotional mobile tariffs to ensure revenue growth does not stop.

Apple Park, the $5 billion ‘Spaceship’ campus, to open in April
Apple Park, the futuristic ‘Spaceship’ campus in Silicon Valley envisioned by Steve Jobs as a “centre for creativity and collaboration,” will open in April, the company has announced. The 175-acre campus has a ring-shaped main building clad in giant panels of curved glass blends workspaces and parkland, and is powered entirely by renewable energy, CEO Tim Cook said. A theatre in Apple Park has been named after Jobs in his memory.

Xiaomi Mi Max 2 rumoured to launch in May, Mi 6 live image leaked
Xiaomi Mi Max 2, the follow-up to last year’s Mi Max with 6.44-inch display, will reportedly be launched in May. The mid-range, big-screen smartphone is said to pack the Snapdragon 660 processor, backed by 6GB RAM, while the display size is expected to remain the same. In-built storage of the Xiaomi Mi Max 2 will be 128GB, while the battery capacity is said to be 5000mAh.

In other Xiaomi news, live images of Xiaomi Mi 6 have leaked online, showing the front panel of the smartphone. While the images hint at a very high screen-to-body ratio, but show a very different design compared to previous Mi 6 leaks, putting their authenticity under doubt.

Instagram allows users to share multiple photos, videos in single post
Instagram is rolling out a new feature that finally lets users share up to 10 photos and videos in a single post. The feature is being rolled out gradually and will hit Android and iOS users over the next few weeks. When Instagram followers see the post, it will appear as an album, and each photo and video can be ‘liked’ individually. The post will have a carousel interface and followers will have to swipe sideways to view more photos in the post.

MobiKwik to invest Rs. 300 crores in bid to triple user base
Digital payments startup MobiKwik plans to invest a sum of Rs. 300 crores with the aim of increasing its user base from the current 50 million to 150 million by 2017-end. It added that the rise in users will be accompanied by an increase in Gross Merchandise Value (GMV); it is eyeing GMV of $10 billion by year-end from $2 billion at present. MobiKwik will mobilise the Rs. 300 crores in the form of loyalty initiatives as well as launching financial services such as loans and investments on its platform.