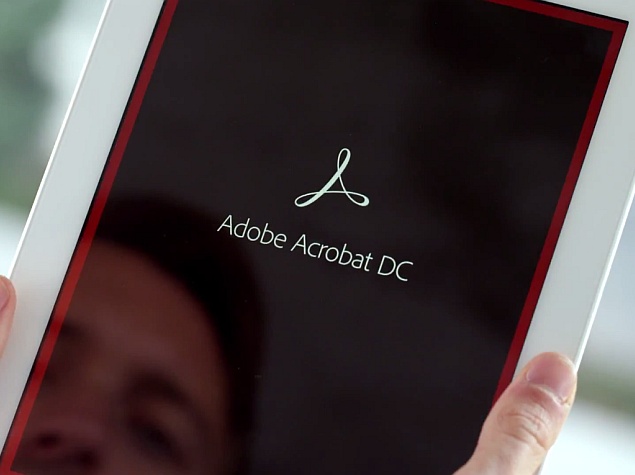 Adobe has introduced Document Cloud, besides two new mobile apps and Adobe Acrobat DC. Document Cloud is based on the same subscription model as Adobe's Creative Cloud and Marketing Cloud for creative and marketing professionals.

Adobe Document Cloud for business professionals is aimed at making the handling of documents more efficient by providing access both via the desktop suite of apps and the cloud. The service is also touchscreen friendly for access via mobile devices. The Document Cloud also includes an overhauled version of its Acrobat software called Adobe Acrobat DC (for Document Cloud) with an updated easy-to-use interface. It also adds a scanning feature that converts the snapped image into an editable pdf file.

Acrobat DC will replace Acrobat XI. Adobe's E-signing (formerly known as EchoSign) tools are also baked in inside the Acrobat DC that lets users fill in or add their signatures to forms. Document management and control is also featured in the service, allowing for document tracking that lets users keep a track when their files are being viewed. Users will also be able to control what is viewed in the case of sensitive documents.

Like the Adobe Creative Cloud, the Document Cloud is also based on subscription programme. Existing Acrobat subscribers would have to pay monthly fee of $14.99 for accessing shared services and libraries, and will get Acrobat DC alongside. Automatic installation of updates also comes as a part of the subscription. Creative Cloud and Marketing Cloud users will get access to Document Cloud as a part of their existing plan. Users have the option of either buying Acrobat DC as a one-time purchase, or paying for access via subscription.

As for the mobile platform, Adobe has introduced two new apps for iOS named Acrobat Mobile and Fill & Sign, which will be made available for Android, iOS, and Windows. The new apps will let users create, edit and sign on documents directly from mobile phone or tablets. Acrobat Mobile also gets the Acrobat DC feature of scanning in an image of document and converting it into a digital copy for editing, signing and sharing.

Adobe added that it would bring services like document analytics and the ability to digital certificate signing in future. The firm also plans to integrate tools from Marketing Cloud in its Document Cloud.

Both the Adobe Acrobat DC and Document Cloud will be available next month.