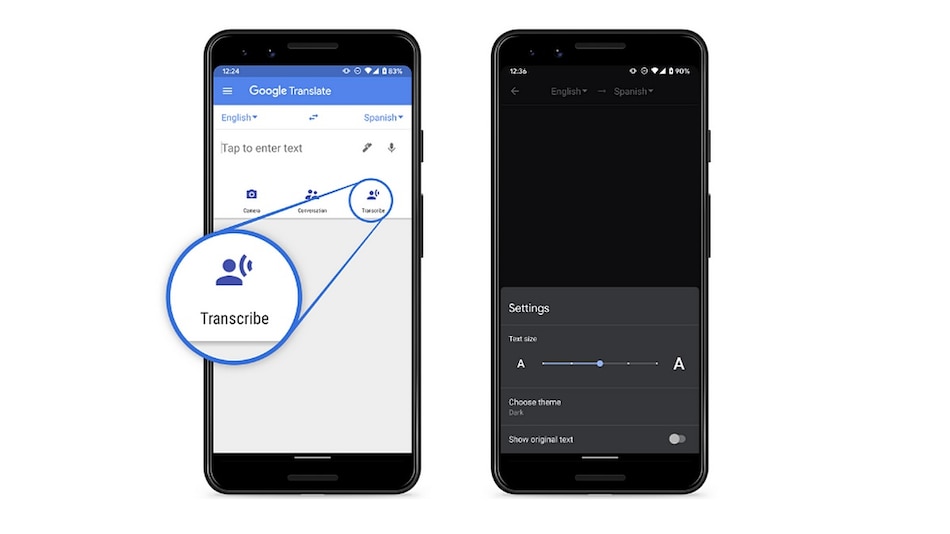 Google Translate app on Android has got a new feature called Transcribe that can live translate speech into another language. The announcement was made by Google CEO Sundar Pichai on his Twitter handle where he mentioned that at the moment, there is support for 8 languages with more coming soon. The Transcribe feature should be available to you if you have the latest version of the Google Translate app on your Android phone. To recall, the company had launched a Recorder app with the Pixel 4 that converted speech to text quite efficiently, and the latest Transcribe feature takes it a step further. The feature had been shown off in an AI tech demo by Google and January, and is now rolling out.

We're launching a Transcribe feature in Google Translate that can convert speech into another language as it's happening. Starting in 8 languages, rolling out to Android today, more to come soon. #GoogleAIhttps://t.co/IMWjFgScVx

The Transcribe feature has been detailed on the official blog but essentially what it does is listen to speech in a certain language and then shows it as text in a different language. At the moment, the supported languages include English, German, Hindi, French, Portuguese, Spanish, Thai, and Russian. To use the Transcribe feature, you need to have the latest version of Google Translate installed which will then give you an option called ‘Transcribe' along with the pre-existing options of ‘Camera' and ‘Conversation'. After tapping on Transcribe you will have to select the source and target language from the dropdown and that's it.

According to the blog, you can pause or restart transcription by tapping the mic icon. The feature allows you to see the original transcript, choose a dark theme, and change the text size by going to the settings menu.

As of now, the Transcribe feature is said to work best in a quite environment with a single person speaking at time. If that's not the case, the app will try to give users the main idea of what is being said.

Google launched its Recorder App for the Pixel 4 and Pixel 4 XL, and it was later made available on older Pixel phones as well. The app, as seen in the demo at the company's hardware event last year, was able to listen to English speech and show it in text with great accuracy using speech recognition and artificial intelligence (AI). Back in January, Google had demoed Translate's upcoming transcription at an AI tech demo event in San Francisco.

Now, the feature has officially been rolled out for Android devices in the form of ‘Transcribe'. It has not reached all devices yet and will make its way to everyone in the next few days as stated in the blog post.