WhatsApp Will Now Label Forwards in a Bid to Combat Misinformation 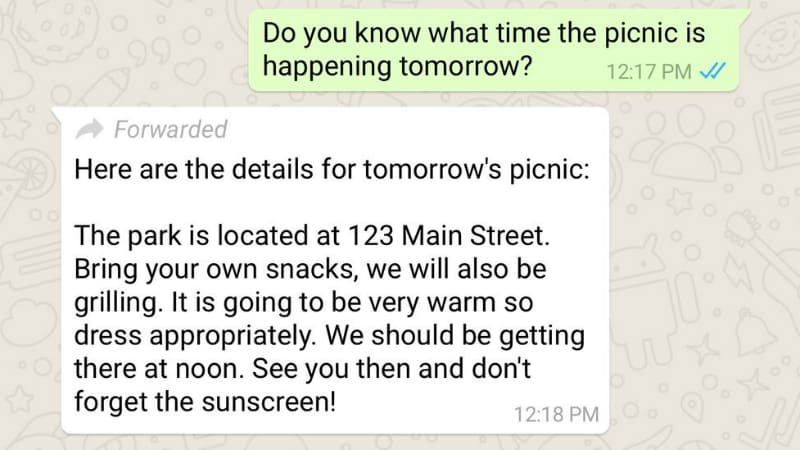 WhatsApp has started rolling out a feature that will indicate to users which messages they receive were forwarded by as is the sender. Seen by Android beta users last month, the new WhatsApp feature essentially adds a 'Forwarded' label to all the forwarded WhatsApp messages you receive to help you determine if your contacts have written the message they sent or if it was originally created by someone else. The new WhatsApp feature, which is now rolling out for both Android and iOS users around the globe, comes as another move by the Facebook-owned company that can help limit the circulation of spam and fake news on its platform that has over 1.5 billion monthly active users worldwide and more than 200 million active users in India.

"Starting today, WhatsApp will indicate which messages you receive have been forwarded to you," WhatsApp said in a statement announcing the new feature. "This extra context will help make one-on-one and group chats easier to follow [...] WhatsApp cares deeply about your safety. We encourage you to think before sharing messages that were forwarded."

Last week, a 'Suspicious Link Detection' feature was also spotted on WhatsApp that is designed to highlight the presence of a suspicious link in a message. The app also restricted the dissemination of false messages through a 'Send Messages' permissions feature for groups that allow group admins to limit participants from sending messages.

How to get the WhatsApp 'Forwarded' feature

Notably, you need to have the latest WhatsApp version on your device to see the 'Forwarded' label. The label sits on top of the forwarded message to highlight that it hasn't been created afresh for you. Furthermore, there isn't any option to disable the label. This means that users who forward the messages won't be able to remove the label from their side.

A WhatsApp spokesperson has confirmed Gadgets 360 that the new feature is rolling out now for both Android and iOS users and will be available globally in the next few days. While the feature is indeed help in the cases where a message is being forward using WhatsApp's native message forwarding functionality, it doesn't restrict users from copying-pasting the text and forwarding it as a fresh message, ensuring no 'Forwarded' label is visible in that case.

To see how the 'Forwarded' label appears, you can select and forward one of the messages available within another WhatsApp chat thread. The feature was previously a part of the WhatsApp beta for Android version 2.18.179 that was released last month. To recall, the feature was first spotted in testing as disabled by default in January, and then seen again in later versions.

Considering the ongoing debate over WhatsApp being a source for the circulation of misinformation, the additional of the Forwarded label is a welcome step. It comes just after WhatsApp published advertisements in key Indian newspapers to make people aware of various ways to understand the difference between fake and real news. The company also recently started taking help from local experts to fight misleading information.

The spread of misinformation on WhatsApp already prompted mob lynching in India and led to the killing of multiple people in many Indian cities. As an aftermath of the recent deaths, the IT Ministry asked WhatsApp to take necessary remedial measures to curb the circulation of fake news through its platform. The ministry had said that the messaging platform "cannot evade accountability and responsibility" when such services are abused by users to spread misinformation. WhatsApp responded to the ministry in a letter that was calling the government, civil society, and technology companies to work together to stop the circulation of false information and provocative content through its platform.