The Wordle copycat was available with a $30 (roughly Rs. 2,200) annual subscription. 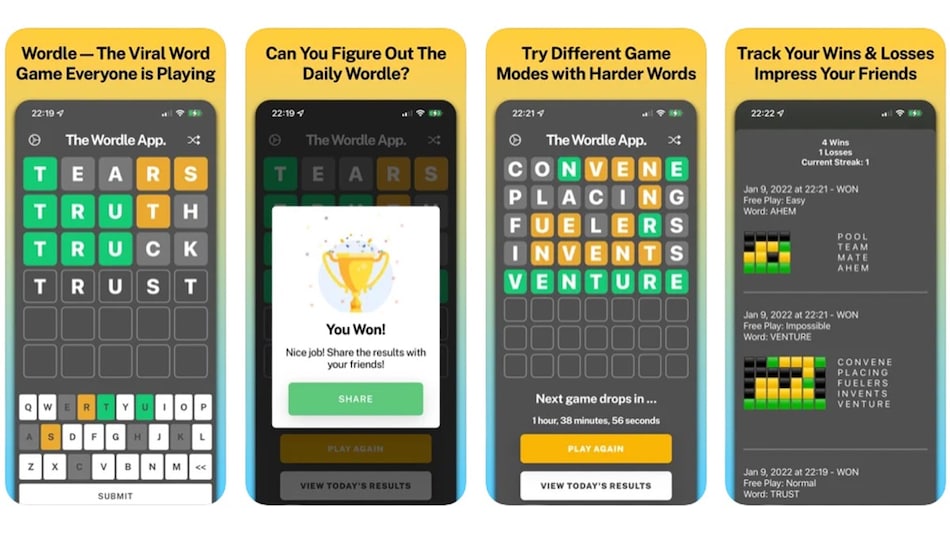 Wordle — the daily secret word game — tasted great popularity recently as several people started tweeting about the game with screenshots, making it even popular. But since Wordle is so far officially playable only on the Web, a developer built its clone and made it live on Apple's App Store. The replica arrived with in-app purchases and garnered thousands of downloads shortly after the release. However, shortly after its debut, the game was pulled from the App Store.

New York City-based developer Zach Shakked created the Wordle rip-off earlier this week. Called Wordle - The App, it offered a similar gameplay where users have to guess five-letter words to solve the puzzle of the day. It also had the same layout and interface. The rip-off, however, did have some changes over the original version and allowed users to guess up to seven-letter words, the developer tweeted.

I love Wordle so much I decided to make my own Wordle app but with a twist! There's not just 5-letter words, but also 4, 6, and 7 letter words too! You can also play unlimited times if you're on the Pro version. https://t.co/eOkRovYSxN

While Wordle in its official form is available for free to all users, the copied model was available with a $30 (roughly Rs. 2,200) annual subscription. The game garnered over 5,400 downloads in just an hour after launch and reached the 28th rank in word games available on the App Store shortly thereafter, Shakked said.

The developer pointed out that he managed to offer the same game mechanics and interface on the game that are available on Wordle since the creator of the original version — Josh Wardle — doesn't own its trademark ownership.

But nonetheless, shortly after creating the imitation, Shakked faced outrage on Twitter for copying the much-loved game. Apple ultimately pulled the rip-off from the App Store, the developer informed in a thread on Twitter.

Favouring his decision of copying Wordle, Shakked said that he was working on an update with a different interface.

“This was the perfect storm to publicly crucify me for something that is common,” he tweeted. “In a week, my app would've looked totally different and had way more functionality beyond what [the] original dude did.”

He, however, acknowledged the imitation and stated that he would not repeat it in the future.

Having said that, the appearance of the Wordle copy on the App Store suggests that Apple needs a more rigorous process of reviewing apps that just duplicate a game or solution that has gained popularity in a short while.

A report by IT security firm Trend Micro in 2019 revealed that hundreds of fake apps existed on the App Store. Developers including Kosta Eleftheriou also last year highlighted that Apple algorithms for approving apps are often being tricked by copycats.

Apple did not comment on a request around the concerns raised due to the Wordle rip-off. Gadgets 360 has also reached out to Wardle to get his views on the copied version. This article will be updated when we hear back.